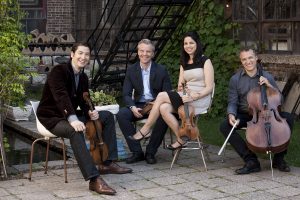 If you are a chamber music ensemble, you know that you have arrived when a prestigious music school invites you for a long term residency and puts you on the full time faculty. It is one thing to have a busy touring schedule and a fistful of glowing reviews, but nothing compares with the security of residency.

On these counts, it is safe to say that the Pacifica Quartet—in town to perform a concert of Beethoven and Prokofiev Friday (October 5) at UC San Diego—has it made. This month the quartet is embarking on its new residency at Indiana University’s Jacobs School of Music and is about to release another CD set, the third installment of the complete string quartets of Dmitri Shostakovich (on the Cedille label).

In May, Pacifica played the entire Shostakovich cycle (all 15 string quartets) over four days at the Montreal Chamber Music Festival and commenced their complete Beethoven quartet cycle in Denver. These musicians make no small plans.

When I last heard Pacifica Quartet—in January, 2009, at UC San Diego’s barnlike Mandeville Center—I was impressed with the musicians’ athletic ensemble playing, electric enthusiam, and extraordinary depth of musical perception. Friday they will perform in UCSD’s Conrad Prebys Concert Hall, whose acoustic intimacy and clarity will only heighten these qualities.

Over the weekend I was able to speak with Masumi Per Rostad, Pacifica’s violist. I asked him the origin of the ensemble’s name.

“I was not part of the quartet when this happened, but it was back in 1994 when they were in Los Angeles, and they settled on the name because of their proximity to the ocean.”

Because Pacifica has been so involved with the music of Shostakovich, I asked him what he had learned from playing all the quartets that he had not known from his academic studies of the composer.

“I was surprised about how light so much of this music is. Usually when anyone mentions Shostakovich, people immediately think dour, austere, and stoic. In his pictures he is rarely smiling. But the quartets are filled with great levity—this is not downer music.”

The other aspect was the Shostakovich’s craft as a composer.

“All of this repertory is great—there are no weak moments, and it is emotionally valid. Playing all the quartets, you come to see how well thought out the music is from a performer’s standpoint.”

When I asked Rostad if he thought the controversial and rigorously debated book Testimony: the Memoirs of Dmitri Shostakovich, edited by Solomon Volkov, was authentic, he gave an amusing response.

“The relation of the book Testimony to the composer’s life is like that of the movie Amadeus to the life of Mozart. Some of the facts may be wrong, but the overall impression fits.”

Weinberg, a Polish-Jewish composer who escaped to the Soviet Union from his native country in 1939 as the German armies were invading, pursued a perilous career in the Soviet Union. Although he lived until 1996, without the persuasive intervention of Shostakovich in 1953, Weinberg was slated for the Gulag in one of Stalin’s final Jewish pogroms.

“The two composers had a friends rivalry. They were both composing their tenth string quartet at the same time, and they raced against each other to see who would be first to complete the composition.”

No doubt that passed for excitement during severe, long Russian winters.