Most opera fans know that Claudio Monteverdi wrote the first opera, Orfeo, in 1607. And some may have actually experienced productions of this landmark opera, although probably not in one of our major opera houses.

But this Orfeo was first produced as an entertainment for Duke of Mantua’s court. Opera as we know it, a genre of public entertainment, developed in mid-17th  century Venice, where public opera houses sprouted more quickly than today’s Starbucks franchises in a gentrifying neighborhood. And during the Venetian opera season—from the day after Christmas until the first day of Lent—that city’s population could double with the onslaught of visitors arriving to take in the newest operas. 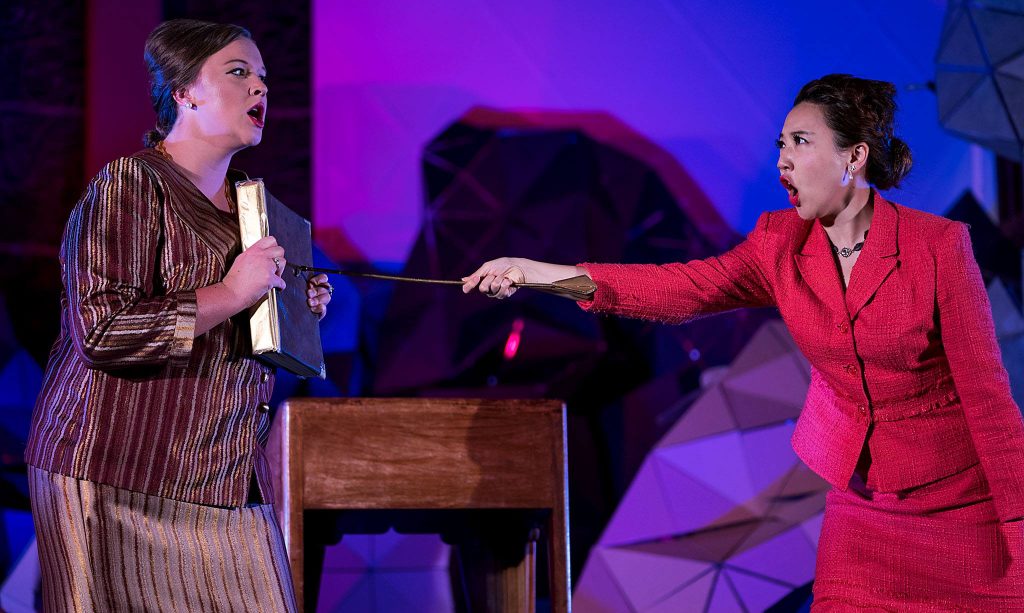 On Friday (August 4), San Diego’s Opera NEO opened its production of Francesco Cavalli’s Il Giasone from 1649, which some music historians count as the most popular 17th-century opera. If you have never heard of either Cavalli or Il Giasone, don’t be alarmed, because the contemporary revival of 17th-century opera is only in its infancy.

I am happy to report that this Opera NEO production in the sanctuary of Palisades Presbyterian Church, skillfully directred by David Radamés Toro and authoritatively conducted by Nicholas Kraemer, succeeds admirably in bringing Il Giasone back to life. Like Mozart and Da Ponte in the late 18th century, Cavalli was able to craft a dramma giocoso, taking the familiar legend of Jason (Giasone) and the Golden Fleece and turning it into en engaging serious drama with amusing comic diversions. Cavalli’s librettist Giacinto Andrea Cicognini devoted most of the opera to Jason’s complex love life—he is torn between his current sizzling affair with Medea, Queen of Colchis, and his former flame with whom he had two children, Isifile, Queen of Lemnos.

Of course Jason also captures the Golden Fleece from the ugly monster that guards it, although event this takes but a few moments in the three-hour plus opera. Most of the time he is either wooing Medea or trying to placate Isifile and keep her far away from Medea’s sight.

Countertenor Cameron Shahbazi created a highly sympathetic lead, using his clear, flexible voice to portray the young, impetuous lover who vacillates between intense ardor and indecision. Michelle Perrier’s bright, dramatic soprano made the ideal demanding, possessive Medea, and she used it with spectacular effect in her diabolical scene “Dell’antro magico” in which she invokes Pluto to aid her beloved Jason in his conquest of the Golden Fleece. As Isifile, Veronique Filloux’s soprano brought warmth and a voluptuous sustained legato to her role as the spurned lover who wins Jason back in the end.

Audience favorite tenor Blair Remmers stole every scene as Demo, a stammering dwarf from the court of Egeo, King of Athens. He cannily flaunted his powerful, piquant tenor as he chewed the scenery (modest as it was) with his perfectly timed slapstick antics. Vying with him in comedy were mezzo-soprano Kelly Birch as Delfa, Medea’s worldly-wise old servant, and deep-toned bass-baritone Patrick Murray as Isifile’s bumbling confidante Oreste.

Tenor William Ottow as Egeo used the brilliance of his upper range to express his valor—he rescues Medea from drowning in the sea—although he also vacillates into self-pity when Medea rejects him for the dashing young Jason.

I have purposely leaned on the stereotypical qualities of each vocal range because the 17th-century Venetians invented these categories that held sway for centuries in Italian opera. And in 1649, these clear demarcations—sopranos as virtuous and noble; baritones as super masculine; countertenors (actually castrati in that era) as effeminate lovers; mezzo-sopranos and altos as comic servants; basses as divine or diabolical—were as new as today’s cell phones.

From the harpsichord, Nicholas Kraemer kept the 16-piece period orchestra lively and splendidly focused throughout. I enjoyed the strings’ edge that kept their sound from becoming too plush, the recorders’ pellucid tones, the theorbo’s ping, and the natural trumpets’ mellow ring. And I was amused when Jonathan Brandani slipped away from his keyboard continuo function in the “pit” to sneak behind the scenery and play the Presbyterian Church’s pipe organ as continuo for Jupiter, because male divinity required organ continuo in that era. If the Presbyterian organ did not have a particularly 17th-century timbre, it certainly suggested the appropriate gravitas for the scene!

David Radamés Toro used the unit set with as much variety as it would bear, and a few processions and entrances up the church’s center aisle provided welcome contrast. Toro kept the opera’s pace as nimble as the score would allow, but 17th-century dramatic development is nothing like the swift progress of verismo plots. Il Giasone’s internal clock is light years away from Tosca and much closer to the lumbering pace of Il Trovatore.

I left this performance with an awakened curiosity about Italian opera between Monteverdi’s Orfeo and Handel’s Giulio Cesare, grateful for Opera NEO’s brave venture into this uncharted territory. What would this opera be like if the Los Angeles Philharmonic staged it in Disney Hall?

This performance of Il Giasone was presented by Opera NEO on August 4, 2017, in the sanctuary of Palisades Presbyterian Church and will be repeated in that venue on Sunday, August 6, 2017. On August 5, 2017, the company presents its production of Mozart’s Così fan tutte in the Palisades Amphitheater, and August 11-12, 2017, the company presents C. W. Gluck’s Armide in that outdoor venue. Both church and amphitheater are located at 6301 Birchwood Ave., San Diego.