As Opera NEO Artistic Director Peter Kozma welcomed Saturday’s (July 15) audience to his company’s season-opening Aria Marathon program, he offered his humorous take on the event. “Aria Marathon—or as some call it, death by aria!”

In rapid succession, 31 young singers enrolled in Opera NEO’s summer festival darted center stage at Palisades Presbyterian Church (where the spacious chancel conveniently doubles as a stage) to offer their best arias. Aided by a battalion of five seasoned accompanists, these singers spanned the opera repertory from the florid coloratura excesses of Handel and Mozart to the extravagant emotional outpourings of Puccini and Cilèa, not to mention the wit of Leonard Bernstein. 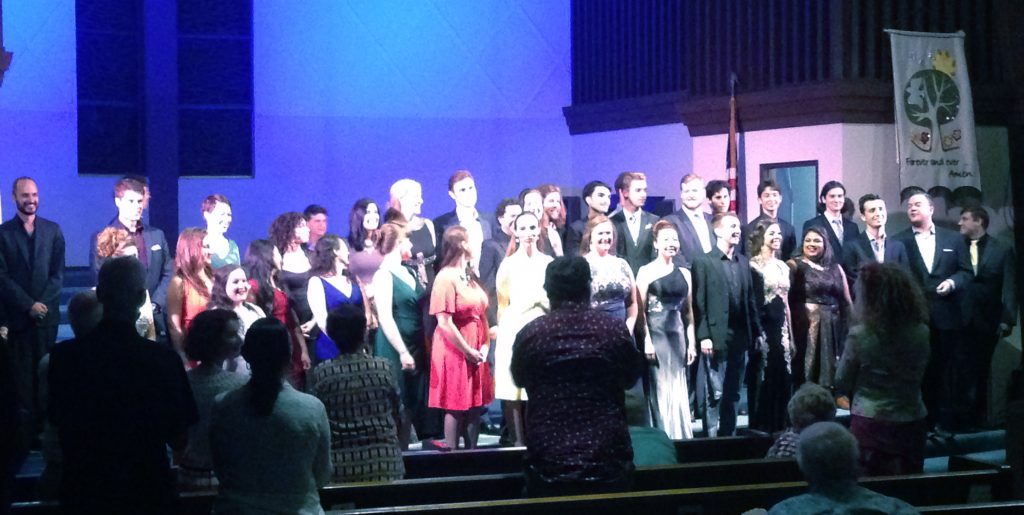 In addition to indulging the passion of opera aficionados, the Opera Marathon serves to introduce the singers who will be doing the heavy lifting in the three operas the company will stage next month. So we heard the hearty bass baritone Dale DeWood, who will sing the role of Don Alfonso in Così fan tutte, confidently toss off a drinking song from Carl Maria von Weber’s The Merry Wives of Windsor, and the impressive countertenor Cameron Shahbazi, who will take the title role in Francesco Cavalli’s Giasone, stylishly navigate the bracing fioritura in “Presti omai l’Egizia terra” from Handel’s Giulio Cesare.

Mezzo-soprano Stephanie Doche, who opened the evening with a searing, confident account of “Crude furie” from Handel’s Serse, will sing Dorabella in Così fa tutte, and the fine Korean soprano Naré Yang, who will sing Sidonie in Gluck’s Armide, lavished her highly expressive phrasing on “Comme autrefois dans la nuit” from Bizet’s The Pearl Fishers. Jon Jurgens garnered well-deserved bravos from the audience for his compelling “E’ la solilta storia” from Cilèa’s L”arlesiana. Jurgens will lend his rich, Italianate tenor to Ferrando in Così fan tutte. Joining Jurgens in Così, baritone Aaron Keeney will sing Guglielmo. His command of Wagner’s long, sweeping lines and depth of interpretation made the familiar “Ode to the Evening Star” from Tannhäuser memorable.

“Glitter and be Gay” from Candide was certainly the right choice for San Diego’s Pride weekend, and soprano Michelle Perrier pulled out all the dramatic and vocal stops to make this show-stopper as glorious and camp as Bernstein intended. Perrier will sing Medea in Cavalli’s Giasone. Joining her in that production as Eolo will be mezzo-soprano Sarabeth Belon, whose highly charged, dramatic account of an aria from Ruperto Chapi’s zarzuela Las hijes del Zebedeo impressed me greatly.

Bass-baritone Patrick Murray, who will take roles in both Giasone and Armide, made a fine vocal and dramatic impression with his “Sibilar gli angui d’Aletto” from Handel’s Rinaldo, as did resonant baritone Maxwell Seiffert in his “Ô vin dissipe la tristesse” from Hamlet by Ambroise Thomas. His highly idiomatic command of French declamation is rare among American singers!

Overall, the caliber of the 2017 crop of Opera NEO singers bodes well for the festival’s upcoming productions:

The Aria Marathon was presented by Opera NEO on July 15, 2017, in the Palisades Presbyterian Church, 6301 Birchwood St., San Diego, CA