By the mid-1730’s, when he completed his Italian operas Ariodante and Alcina, George Frideric Handel stood at the peak of his compositional prowess. Although every serious historian who writes about Handel cites these operas as among his most accomplished works, neither is part of current standard opera repertory. 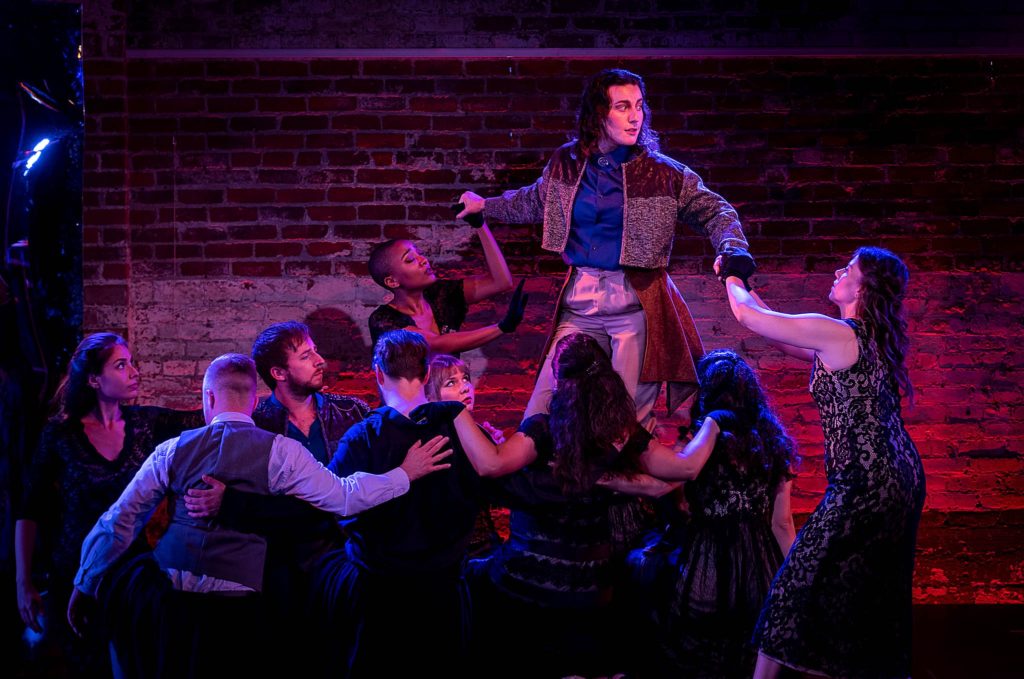 For San Diego’s enterprising Opera Neo company, such works are obvious choices to stage, and Friday at Bread & Salt in Barrio Logan, Opera Neo opened an astonishingly well performed production of Handel’s Ariodante with the amazing Stephanie Doche in the title role.

Handel took this straightforward love story gone off the rails from Ludovico Ariosto’s Orlando furioso, a late Renaissance epic poem that has spawned many an opera over the centuries. In Handel’s story, the Scottish princess Ginerva is preparing to wed Ariodante, a worthy young noble, with the complete blessing of her father, the King of Scotland. Another member of the royal court, the evil Duke Polinesso, enacts a nocturnal scene in which he seduces Ginerva’s servant Dalinda disguised as her mistress, cleverly staged so Ariodante will witness the supposed betrayal.

This sends Ariodante into a suicidal fit, and when the King learns of his daughter’s scandalous behavior, he banishes her and calls off her marriage to Ariodante. The rest of the opera allows ample time for High Baroque desolation, the eventual revelation of Polinesso’s treachery, and the blissful reunion of the young lovers.

Because Handel wrote Ariodante as his inaugural production for London’s Covent Garden Theatre, he provided sumptuous arias for all the characters—even the minor players—and his magnificent orchestration is a tour de force of imagination and passion. In last summer’s Opera Neo production of Handel’s Serse, mezzo-soprano Stephanie Doche proved stellar in title role, so my expectations for her Ariodante were high. As she sailed through every challenging, vocally intricate aria with unflinching command and vocal allure, she left those high expectations in the dust. But Doche had more than brilliant pyrotechnics in her quiver. Her compelling, second act aria “Scherza infida,” Ariodante’s lament of betrayal by his beloved, proved emotionally searing, one of those moments in opera that suspends time. 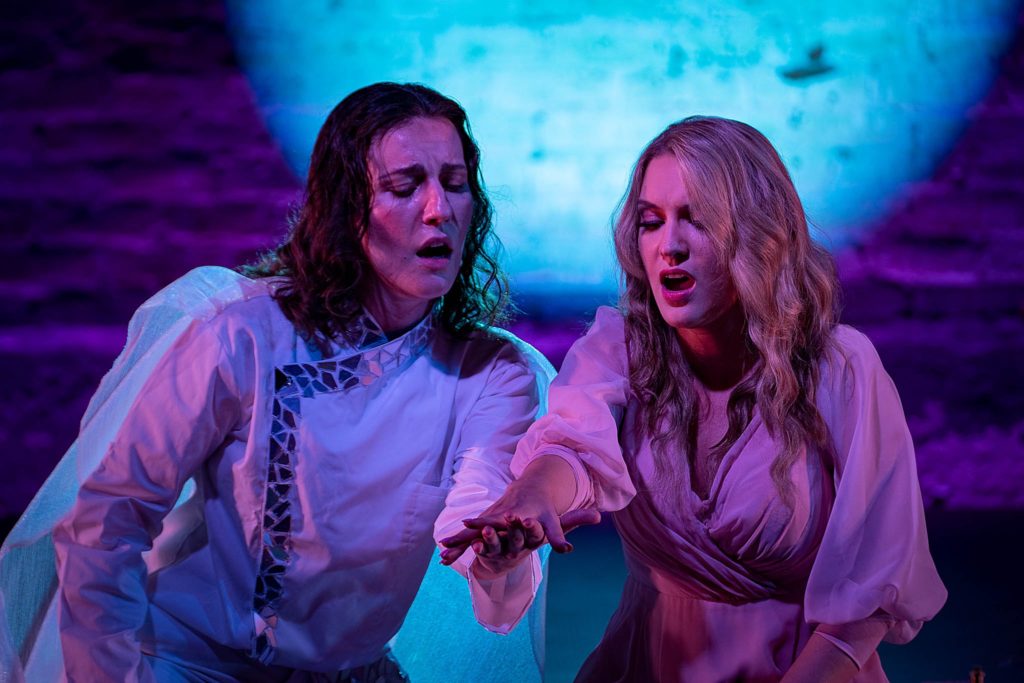 I was a major fan of Sara Womble’s Pamina in Opera Neo’s 2020 production of Mozart’s The Magic Flute, and she did not disappoint in her role of Dalinda, Her clear, supple soprano suited the complexities of Baroque style, and I was moved by her introspective third act aria “Neghittosi or voi che fate.” Countertenor Keith Wehmeier had little trouble unleashing the sinister character of Polinesso–a role as villainous as Shakespeare’s Iago–and his bright, agile vocal technique met Handel’s ample challenges. I appreciated the smug satisfaction of his second act aria “Se l’inganno,” in which Polinesso savors the success of his evil plot. 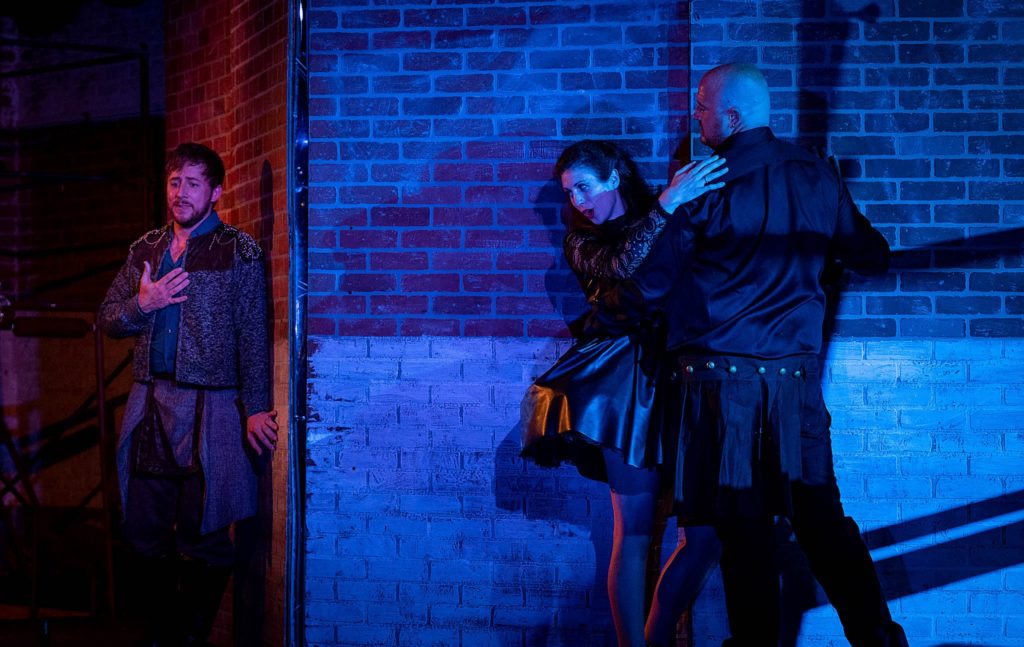 It took bass Andrew Boisvert a while to establish appropriate gravitas as the King of Scotland, but his strong bass came into focus by the second act, and his aria “Invida sorte avara” proved a compelling lament upon hearing the news of Ariodante’s fate. Tenor Brian Skoog  made the most of Aridante’s brother Lurcanio, a role that functions as the necessary messenger at certain points in the plot, but he gave his revenge aria “Il tuo sangue” in Act 3 vocal power and brilliance. Tenor Eric Lane brought alert presence to Odoardo, aide to the King of Scotland.

When Handel composed Ariodante, the noted French dance troupe of Marie Sallé was connected with London’s Covent Garden Theatre, so the composer wrote an unusual amount of dance music for this opera. In this Opera Neo production, Sean Casey Flanagan’s choreography appeared more like stylized marching than dance, but it sufficed.

Benjamin Bayl, the Dutch and Australian conductor who has been featured in several of Opera Neo’s Baroque era opera productions, displayed his ample early music experience and insight on the podium, leading Opera Neo’s period orchestra with assured command. And his lithe touch mitigated the almost three and one-half hour expanse of Handel’s capacious opera. With an ample basso continuo section–yes, two theorbos in addition to two harpsichords and low strings, the orchestra produced a vibrant but polished, highly focused sonority that generously filled the Bread & Salt venue.

Like Bayl’s conducting, Peter Kozma’s stage direction proved well- focused and moved the action with alacrity, aided by Michael Wogulus’s simple but flexible stage design. Each of his four moveable pillars had three sides: the neutral side imitated the bricks of the rear Bread & Salt wall; a shiny reflective surface was turned for joyful scenes, and another set of tall mirrors sported multiple cracks for the plot’s darker times. Elsie Wesley’s ample costumes and capes favored dark, solid colors, and the men wore kilts–the opera takes place in Scotland in some distant but unspecified era–although we were thankfully spared “colorful” tartan designs of any sort.