The world of grand opera and the musical ethos of cabaret songs seem as disparate as their venues—cavernous halls that hold thousands versus intimate clubs with patrons clustered around a few tables. So when an opera star such as soprano Patricia Racette announces she will perform a program of cabaret and jazz standards for San Diego Opera and titles her evening “Diva on Detour,” eyebrows are understandably raised. 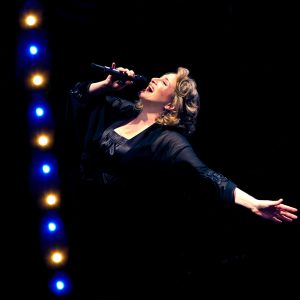 But Racette wants to make it clear that she has not drifted off into foreign vocal territory.

“This is the kind of singing I started out doing, “ she explained. “It was only when I went off to college that I happened into opera. When I sing Diva on Detour, I’m actually returning home.”

In her early teen years, Racette styled herself after the great female jazz artists Sarah Vaughan, Ella Fitzgerald and Carmen McRae. She recalled her most cherished high school graduation present: going with her high school choral director to hear Vaughan sing in concert in Boston. But when she started the University of North Texas at age 18, she discovered that the school didn’t have a degree in vocal jazz, and she was placed in a track of traditional vocal study.

She went along reluctantly until a recording by the Italian diva Renato Scotto changed her mind.

“My voice teacher had given me an aria from Puccini’s Soeur Angelica to learn, and I remember sitting on the floor of my apartment listening to a recording of that aria sung by Scotto. When I heard Scotto sing, it was a revelation. I felt those proverbial lightning bolts strike, and I knew then ‘I must do this!’ “

San Diego Opera aficionados first heard Racette in 1995 as Mimì in Puccini’s La bohème and then in 2001 as Love Simpson in Carlisle Floyd’s Cold Sassy Tree, a role she created for the world premiere at Houston Grand Opera. She returned in 2004 for the title role of Janacek’s Katya Kabanova and in 2009 as an unforgettable Cio-Cio San in Puccini’s Madama Butterfly.

San Francisco Opera, Los Angeles Opera, Lyric Opera Chicago and the Metropolitan Opera are some of the major American companies with which she has established strong relationships, and the Diva on Detour is truly the Diva in Demand.

Racette thrives on challenging assignments. Earlier this year, she sang Marie Antoinette in Los Angeles Opera’s extravagant revival of John Corigliano’s grand opera buffa The Ghosts of Versailles, and for San Francisco Opera two seasons back, she stepped in to create the title role in the world premiere of Tobias Picker’s Dolores Claiborne. Picker’s opera was originally written for the American mezzo Dolora Zajick, who pulled out of the project as the opera was going into production. Racette saved the day, while the composer made last minute adjustments to make the role fit her soprano range. And her performances of Dolores Claiborne overlapped the company’s production of Boito’s Mefistofele, in which Racette sang Margherita.

But singing her Puccini heroines and creating roles in new operas left something out of her musical satisfaction.

“It was when I appeared in a choral concert in 2004 with Santa Fe’s acclaimed Desert Chorale to sing a set of cabaret songs that my passion was again ignited to perform this repertory.”

It took several years for Diva on Detour to come together, but she recalled putting it on stage for the first time in 2010 at Pace University in New York City, and her recording of many of the songs in Diva on Detour was released in 2013.

Although her opera heroines have the luxury of a plot to develop and give depth to their characters, she does see a connection to the popular standards she sings in Diva on Detour.

“You could say these cabaret songs are really condensed opera stories about the poignance and elation of love. Except I have the advantage of being myself when I sing, instead of having to create a Mimi or Violetta or Cio-Cio San.”

Racette observed that some of the most celebrated cabaret singers such as Judy Garland and Edith Piaf lived tragic lives worthy of an opera.

“I think an opera about Piaf would be a great idea, and Jake Heggie and I have had quite a few discussions about what such an opera would be like.” On her Diva on Detour recording, Racette sings the Piaf signature songs “Milord,” “La Vie en Rose,” and “Padam, Padam.”

She admitted that Heggie has yet to commit to the Piaf project, but it is a tantalizing notion. San Diego audiences loved Heggie’s epic Moby-Dick in the 2012 San Diego Opera season and will experience the company’s production of his most recent opera Great Scott in May of 2016.

Performing a program of cabaret and jazz standards by Stephen Sondheim, Cole Porter, George Gershwin, and Edith Piaf may attract music lovers who don’t typically attend opera, but Racette noted that most of her Diva on Detour audiences are made up of opera fans whose just want to know what else she can do. But dangers lurk in such curiosity.

“I remember one Diva on Detour performance that was staged after a banquet that followed a lengthy cocktail hour. Between two of the songs, a lady in the front row who was quite inebriated suddenly looked up and blurted out ‘Sing Un bel dí’.”