Prior to the current pandemic, a typical NWEAMO new music festival would unspool leisurely over a three-day weekend at San Diego State University. Each concert in Smith Recital Hall offered the customary 20-minute intermission, and a day’s activities between the concerts provided a welcome cool-down from the intensity of immersing the brain in challenging music.

NWEAMO 2021 presented the entire festival online in three non-stop installments, a five-hour marathon Sunday afternoon, May 2, that tested the alert concentration and comprehension of even devoted new music followers. It was, however, an impressive array of aural and visual stimulation. 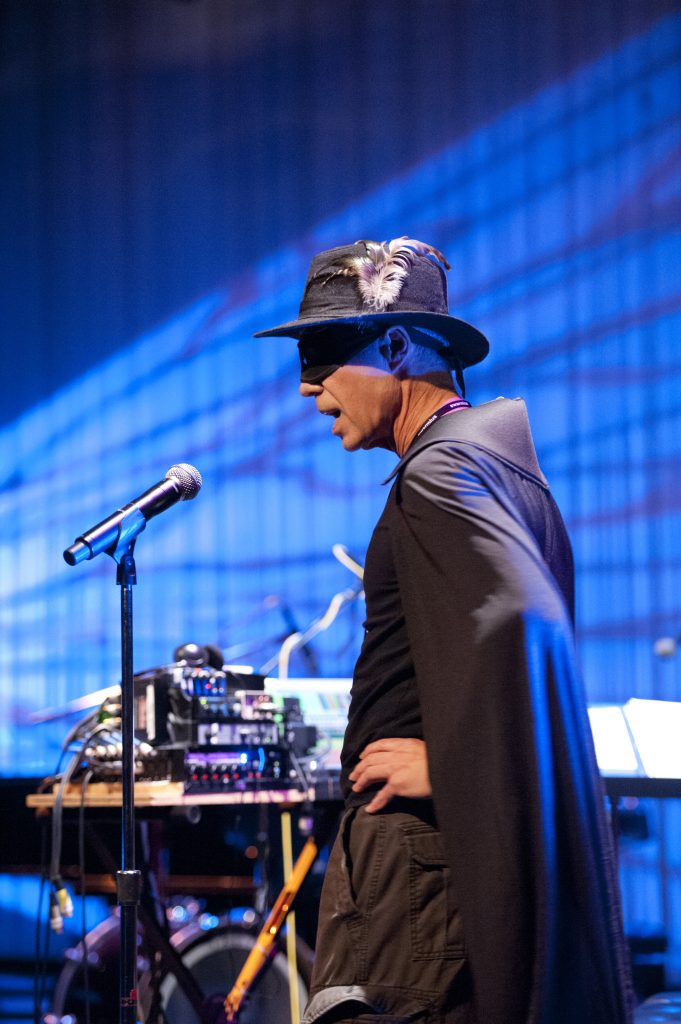 Although a few of the entries were simply straight video presentations of the actual work in performance, most entries boasted a uniquely crafted video component. “Extraclusion,” Julie Spencer and Avi Béla Spencer-Blume’s opening salvo for the 2021 festival, placed the viewer in the front passenger seat of an auto as it took an evening spin from the bright urban industrial lights to a desolate rural highway—from the signs, somewhere in Germany. As these nocturnal scenes flash by, sinuous, computer-derived instrumental themes spin out, punctuated by an engaging, hypnotic percussion ostinato.

And speaking of ostinatos, Scott Johnson’s “Winners,” produced and performed by the well-known Rochester, New York, contemporary chamber ensemble Alarm Will Sound, employs a constantly repeated phrase “You can’t get them out of your mind” to propel its multi-hued rush of fantastical animated objects—some animal heads, or human heads with sponge-like bodies, or human torsos with wine goblets for heads. Once experienced, you cannot get this breathless fantasia out of your mind!

Michael Couper’s “Transcend,” a three-movement Concertino for Soprano Saxophone and Electronic Orchestra, presents a jaunty, comfortably tonal sonic tapestry, featuring James McManus’ cartoon-like images of cute yellow saxophones marching along or hopping up stairs, while rows of bassoons disguised as earthworms scrunch along with rhythmic precision in neat military rows. The composer is the accomplished soloist in this score that sports the drive of a tightly constructed action movie sound track.

Joseph Martin Waters’ passionate, brashly Romantic violin rhapsody “Moonlight Beach Chaconne” superimposes visual images of the actual instrumental soloists over a constantly moving collage of aquatic and garden images. I recall hearing violinist Pei-Chun Tsai and marimba virtuoso Michael Brown perform this moving work in an October 2019 concert at Bread and Salt in Barrio Logan, and their presence in this video proved equally compelling. As founder and director of the NWEAMO festival, we expect contributions from Waters, and this new incarnation of one of his most captivating compositions was an inspired choice.

A mesmerizing duo for violin and piano, Martin Bresnick’s 1999 “Bird as Prophet” radiates improvisatory abandon, yet a second hearing reveals the composer’s elegant structure and acute balance of these two bravura forces, realized with amazing skill in this video performance by violinist Elly Toyoda and pianist Lisa Moore. Bresnick’s 13-minute piece is a more probing etude than Robert Schumann’s short piano solo of the same title, but each piece takes flight in fantasy.

Texu Kim’s “Homage to Anonymous Ancient Fiddlers” also places virtuoso demands on violinists. Rannveig Sarc and Brian Hong, a brilliant duo from the New York Classical Players, recorded Kim’s work in an empty concert hall in October of 2020. I confess that I am rarely charmed by those gaudy, highly embellished Fritz Kreisler encores that concert violinists so readily offer as encores, but Kim’s amazing wealth of thematic invention and the duo’s lustrous sonority made this cameo of explosive flourishes sheer delight.

Gregory TS. Walker turned Langston Hughes’ iconic poem “The Negro Speaks of Rivers” into a video parable in which a stylized river drawing carries the viewer along a series of intimidating images, including claustrophobic brick walls; drab, monolithic urban housing skyscrapers; a solitary police car; a prison watchtower, and a billboard that proclaims “Go Back to Africa.” In the screen’s lower left-hand corner, a black musician plays a 12-string guitar while intoning barely audible phrases, although the video’s computer generated sonic background is awash in clicks and ambient buzzing. The guitarist then becomes the figure we see from behind as he runs along the river to escape the oppressive images.

In “The Concord of Discord,” Alexis C. Lamb keeps up a gentle, ingratiating vibraphone ostinato as she relates her experiences as a young high school band director who casually but intentionally reveals her sexual identity to her students. Lamb’s mantra is “I dress myself in symbols,” and her quiet but intense speaking suggests the sacred chant of monastics.

During the 2019 NWEAMO festival at San Diego State University, Joseph Martin Waters staged the first half of his opera El Colobri Mágico (The Magic Hummingbird), and for NWEAMO 2021, from the video made of that 2019 performance, he refashioned a scene into “Saint Children.” With computer magic, the realm of curandera Maria Sabia easily became a multi-hued enchanted forest with bright flowers opening up on full screen. It was a delight to hear again Karen Garcia’s lilting soprano as Maria Sabia and to experience alto saxophonist Todd Rewoldt’s florid solos. In some of the visuals he is seen playing a tree branch attached to a saxophone mouthpiece. He could not have done that on stage with the same musical results!

This review of NWEAMO 2021 does not include every musical/video presentation in the festival, but I believe it gives a clear sense of the variety and caliber of this vivid online event.