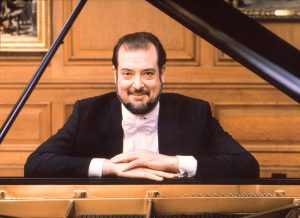 After the San Diego Symphony’s opening weekend piano concerto marathon with Lang Lang—he played Beethoven’s “Emperor” Concerto last Friday and Sunday and Tchaikovsky’s First Piano Concerto on Satruday—it seemed like too much of a good thing to invite Garrick Ohlsson to solo in Tchaikovsky’s Second Piano Concerto in G Major the following weekend.

But, as Mae West once pronounced with near Papal authority: too much of a good thing can be wonderful!

On Friday (October 12) at Copley Symphony Hall, both Ohlsson and the rarely played Tchaikovsky Piano Concerto In G Major were indeed wonderful. Ohlsson, a bear of a player with an outsized technique, subdued the challenges of the Tchaikovsky with understated command and ample interpretive insight.

The concerto’s massive and technically demanding opening movement offered sufficient opportunity to gild the lily, but Ohlsson suavely ignored such temptations. After pages of turbulent octave flourishes and two mighty cadenzas (the second lasting longer than most Chopin solo pieces), he lavished his ministrations on an agile section of transparent themes that called to mind the elegant dances from  Eugene Onegin, the opera Tchaikovsky finished in 1879 only months before he started to sketch this G Major Piano Concerto.

It is safe to presume that this Concerto’s odd second movement explains its obscurity. During much of this dreamy andante, the orchestra is at rest, while a charming chamber ensemble of the concertmaster, first chair cello and piano soloist play together. And the two solo strings have far more compelling music than the piano. While Concertmaster Jeff Thayer was crafting graceful themes and cellist Yao Zhao was pouring out his heart in burnished sighs, Ohlsson was left staring into space counting measures (or mentally reviewing next week’s performance schedule) until he was called on to add a few modest thoughts to this profound duet.

Everyone jumped into high gear for the finale, a go-for-broke rondo with an abundance of thematic cargo. Music Director Jahja Ling set a rollicking pace that kept his charges on the edge of their seats, and Ohlsson’s effervescent compliance turned what might have been a breathless marathon into a joyous sprint.

He offered Chopin’s familiar Waltz in C-sharp Minor, Op. 64, No. 2, as his encore. Mining unexpected emotive details from this fragile Waltz, he reminded the Copley Hall audience how much depth and soul he brought in both orchestral and solo performances during the San Diego Chopin Bicentennial Celebration (2010-2011).

Ling balanced Tchaikovsky’s heady Romanticism with the deft neo-classisism of Ottorino Respighi’s Suite I from the “Ancient [php snippet=1]Airs and Dances,” a work that takes miniature Renaissance dances and expands them into radiant orchestral gems. Without Reshighi’s luxurious orchestration they would be little more than precious exercises, but Ling found wit and vivacity in such contrapuntal artifice. Among the many wind solos, Principal Oboe Sarah Skuster’s plaintive incantations in the third movement stood out.

In his program notes, Ling observed that Haydn’s symphonies “represent the best training for today’s orchestras,” a point well taken. But the orchestra’s account of Haydn’s Symphony No. 102 in B-flat Major sounded too much like a piece still in the learning stage. In the calmer movements, the players displayed sufficient unity and warmth of tone, but once the tempo increased, notably in the outer movements, the string tone lost its sheen and the unity within each section weakened.

This is a substantial Haydn symphony, one from his final years, but this labored performance made it seem much longer and dutiful than need be. It may be a season or two before San Diego matures into an ensemble that will give “Papa” Haydn his due.