When founder and organizer of the new music festival NWEAMO 2016 Joseph Martin Waters welcomed his audience to Saturday’s (April 9) concert, he described NWEAMO’s change over 18 years in a single phrase. “We started out presenting purely electronic music, but now we are purely eclectic.” 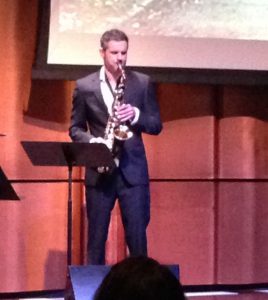 The evening’s fare at the San Diego Central Library Auditorium bore him out: some performance art, several acoustic duos for piano and solo instrument, as well as pieces for performers interacting with electronics. I should quickly add that no animals small or large were sacrificed, although Waters’ “Flame Head” was written as a tribute to Chango, a prominent deity in the Cuban-based Santeria religion.

As a former tournament debater, I would be quite willing to argue the affirmative case on the topic “Opera is the progenitor of performance art.” But the duo Tribal Baroque made a more eloquent case on stage for this premise performing scenes from their fantasy opera “Esh and Ee-ay” than even the most clever speech could hope to make. Soprano Lila’Angelique and countertenor S. K. Thoth sang, danced, and courted while accompanying themselves on violin with billowing arabesques that suggested the marriage of Antonio Vivaldi and Philip Glass. Their nonsense syllable melismas, shouts, and soaring melodies suggested the flurry of bel canto opera, which, from their serious vocal techniques, I could imagine them performing were they less creative or less outrageous.

Gregory Walker played incantational riffs on his electric guitar while interacting with etherial guitar-like electronic sounds in his “Jisei,” named after that traditional genre of Japanese poetry associated with ritual seppuku. Clad completely in white, he merged at times with the abstract video projected above him in mesmerizing slow movements that evoked ancient ritual.

“Summer,” Waters’ dreamy set of rhapsodic acoustic variations on his own romantic ballad, engaged subtle, Impressionistic undulations from pianist Toni James and mellow crooning from saxophonist extraordinaire Todd Rewoldt. A few jazzy excursions and snappy cadenzas along the way for each instrument gave just enough contrast of mood for the listeners and challenge for the instrumentalists. Similarly reflective but less inventive, Mark Kostabi’s “Italian Summer” for solo piano brought to mind the minimalist film scores of the contemporary Italian composer Ludovico Einaudi. 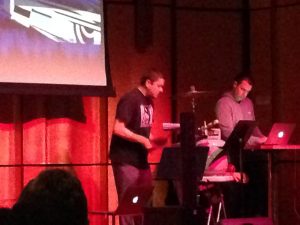 Untuned percussion added to computer-generated sounds could test the enthusiasm of even ardent new music aficionados, but at least percussionist Bob Kostian understood the virtue of concision.