Not Working: A New Musical for a Different World is open for its second weekend, this time at Diversionary Theatre in University Heights, where it runs through Sunday, November 6 before moving on to the Chula Vista Library for one final weekend.

The production, a collaboration between Asian Story Theater, San Diego Black Ensemble Theatre, and Teatro Máscara Mágica, follows California-born Anqa as she returns to America following her family’s deportation, coincidentally during the advent of the COVID-19 virus and quarantine. As Anqa works to find a space where she belongs during the shutdown, she finds her path intersecting with a series of people – strangers, neighbors, and healthcare workers – and she learns just how impactful the pandemic has been on their lives.

In many ways, the production is a song cycle with a loose storyline – after all, it has been woven together to incorporate a series of original songs (ranging from power ballads to boy band rock) written by AJ Rafael, Howard Ho, Luis Aragon, Creative Spés, Antonio TJ Johnson, Gingerlily Lowe, Marc Macalintal, Leonard Patton, DaJahn Blevins, Raya Heart Pearson, Annabelle Ramos, and Dave Scott. Tethering these distinct pieces, each written in isolation, is a periodic story told through brief snippets of dialogue crafted by Kent Brisby. These conversations serve to move the songs and Anqa’s journey forward and, while Not Working remains light on the character development and connection, this structure does serve to keep the production to a comfortable 65 minutes. 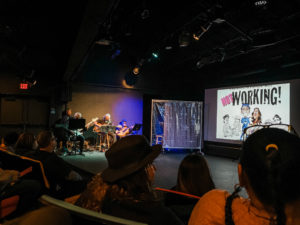 Annabelle Ramos plays Anqa in this production alongside an ensemble of players: Vivian Ariola (Maria and others), Christian Clark (Valentín and others), Honey Durruthy (Sugar and others), Patrick Mayuyu (Earvin and others), Claudette Santiago (Nurse and others), and Ronnie Williams (Nate and others). Their performances have some shining moments, oftentimes cultivated by nuanced song lyrics.

Ramos’ American Dreamer, for example, is a perfect complement to her dulcet soprano and the moments in which she sings about “breaking promises of a promised land” are quietly powerful. Political Science, sung by the company about halfway through the production, is another interesting piece featuring a series of projections and spoken oppositional headlines straight from the news. There are also a few genuine laughs interspersed throughout the show; one such moment occurs during Mayuyu’s Monday Morning, a rock style piece in which he shouts to the audience, “you know what sucks? Updating Excel spreadsheets in your underwear!” Furthermore, the spare set, blocking, and costumes, under co-director Rhys Green, Gingerlily Lowe, and William Virchis’ purview, make sense for a production that is traveling the county.

Admittedly, I left feeling curious about how the script and/or song inclusions might shift with some workshopping and an educational lens. While Not Working certainly highlights common experiences of the pandemic as a whole, COVID-19 exacerbated inequity and marginalization for vulnerable communities and empowered spaces for xenophobia, the weaponization of politics, and the rise of dangerous rhetoric. In developing open dialogues on similar themes after each show, hosted by community leaders, this production does, in a small way, create a collaborative space to address these elements, but it would be great to see even more depth in that work and some shifting to the show in response to that community-centered dialogue.

For those who are COVID-art curious, however, and interested in sampling the commonalities of the pandemic experience, Not Working runs at Diversionary and the Chula Vista Library through November 13.