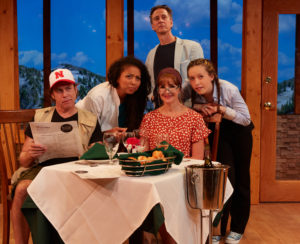 North Coast Rep picked a gem to start its 41st season. The World Premier of “Annabella In July” by playwright Richard Strand, directed by David Ellenstein, sparkles with a wit and an engaging cleverness delivered in perfect timing that carries you through a good story. Spot on casting for the entire ensemble, including a role for a door, allows you to ride along with five characters as each explores their connection to Annabella.

Listed in the program as Vanessa the librarian and played with dexterity by Jacquelyn Ritz as the protagonist, she has the most subtle relationship with Annabella. Ritz carries her role with just the right touch to sustain believability.  Surprisingly, Brian (Louis Lotorto) as Vanessa’s Nebraskan husband deftly develops the most profound character growth, turning out to represent the heart of the story. Bruce Turk as Alexander and Annabella’s ski lodge admirer dances about the stage both physically and verbally as a clever and engaging spark for tightly written dialog with all of the characters that doesn’t rush you or leave you hanging even for a second. Camelia the owner of the ski lodge restaurant is played by Leilani Smith as an ever-smiling presence that makes the revelation of her personal connection to Annabella as universal as the yearning for connection we see in Piper, the young waiter played a bit one-dimensionally, in comparison to the other actors, but with a touching innocence by Catalina Zelles. 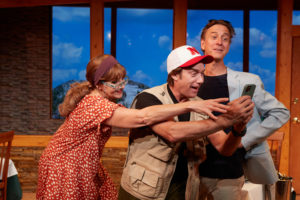 In two acts, the play takes a break and you almost don’t want to leave your seat, so seamless was the first act and so tantalizing the twist at the break. The second act makes you work a little harder to stay in the story as it stretches the verisimilitude so easily donned in the first act. A simple set designed by Marty Burnett is inside the ski lodge restaurant looking out over a balcony to the California ski slopes in summer and provides three layers of scenery in one, chiming with the multiple layers of the story. Some animations woven into the story were cute, but might have been better replaced with this able group of actors describing what they see instead.  Burnett scored with a door that almost becomes a sixth member of the ensemble.

The talisman of the show, the Monarch Butterfly and its juxtaposition with a California ski resort in July hints a bit at the stretch the audience is asked to make as the play moves toward denouement in the second act.  The playwright earned his Master of Fine Arts in the famous University of Iowa creative writing program which is on the central geographical channel for two of the four generations of Monarch migration passing through July, but primary Monarch season in California is November through February. You could take this as just as ethereal a symbol of Annabella as the foreshadowed appearance of an unlikely snow fall, but Strand relies heavily on your imagination to fully grasp Vanessa and Annabella and, more importantly, of Brian’s transition from caterpillar to chrysalis to adult.

Engaging, entertaining yet with depth and humanity, this near perfect melding of playwright, director, designers and actors is what brings people to the theater.