North Coast Repertory Theatre confronted the pandemic head on. It produced Zoom readings and then progressed to recorded productions taped in its Solana Beach facility It even sent a production (Becoming Dr. Ruth) to New York and eventually on tour.

Now, North Coast Repertory is also taking a lead in welcoming audiences back to indoor theatre, with a Mark St. Germain’s two-hander, Dancing Lessons. It’s a good choice for a new start. 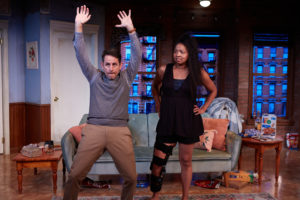 It is 2014, pre-pandemic. Ever Montgomery (Christopher M. Williams) comes knocking on Senga Quinn’s (Leilani Smith) door. He wants dancing lessons so that he won’t be embarrassed at an award function where he is the honoree. He is willing to pay a lot of money for a one-hour lesson.

Senga isn’t sure she can oblige. Ever definitely has problems even moving to a beat. He’s insistent, though, and Senga needs the money, even though she pretends that she doesn’t.

Truth be told, both Senga and Ever are “damaged” in one way or another. Ever is high-functioning autistic, and Senga injured her leg and may never dance again.

Do they manage to find a way to succeed? You probably know the answer. The pleasure comes from watching how it happens. 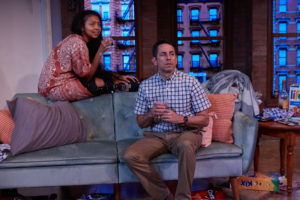 Artistic Director David Ellenstein has tapped frequent NCRT actor Richard Baird to direct. I would call Mr. Baird an “actor’s director,” and Dancing Lessons is driven by the acting at least as much if not more than the story. The primary challenge is for Mr. Williams to play an autistic man appropriately, and his initial appearance on opening night seemed to me to be more exaggerated than necessary. His portrayal settled in as the evening progressed, however. Perhaps the contrast between Mr. Williams’ enthusiasm and Ms. Smith’s despair might have colored my perception that Mr. Williams was overly bright. Ms. Smith’s despair seemed completely on point.

As North Coast has been working in its theatre throughout the pandemic, it is tempting to say that this production continues that work but with the addition of a live audience. Indeed, the technical side of things has been capably handled by the company’s regular creative team: Marty Burnett on set design, Elisa Benzoni on costume design, Matt Novotny on lighting design, and Aaron Rumley on sound and multimedia design (Mr. Rumley became quite adept at filming the company’s streamed productions). For this production, additions to that team were choreographer Cate Caplin and props designer Phillip Korth. Cindy Rumley served as Stage Manager.

As is becoming standard with indoor theatre in our area, audience members are required to show proof of vaccination, and tickets are marked as acceptable for entry once that proof was shown. It really felt like an “add audience” opening night for North Coast, and a play about two people overcoming the obstacles in their respective paths provides pleasant viewing for an evening out.

Performs Wednesdays at 7pm, Thursdays through Saturdays at 8PM, Saturdays and Sundays at 2PM, and Sundays at 7pm through October 3. There is a special matinee Wednesday, September 29, at 2pm. The theatre is located at the rear of a shopping mall, and there is ample free parking nearby.