Mezzo-soprano Isabel Leonard and guitarist Pablo Sáinz-Villegas fused passion and musical prowess in Thursday’s inspired duo recital at The Conrad. They amply fulfilled the promise of their program’s title—Noche Latina—with a compelling selection of vocal and instrumental music by Spanish composers, as well as several opera arias from works set in Spain and Latin America. 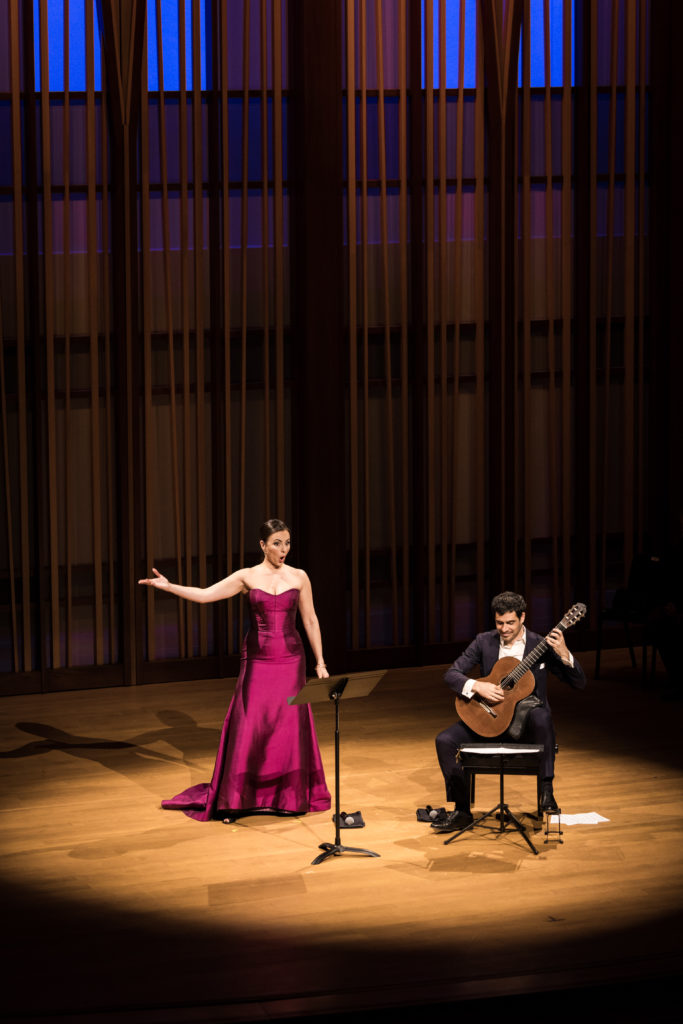 We are accustomed to hearing vocalists accompanied by piano, so before the program I was uncertain that a solo guitar would be up to the task. From the outset, however, Sáinz-Villegas demonstrated that his technical command and his sophisticated transcriptions not only filled the bill, but, as the concert unfolded, he convinced me that guitar and voice were a far more balanced combination than the typical 9-foot Steinway and singer. And the evident chemistry between Leonard and Sáinz-Villegas sealed the deal!

Other operatic selections included “Voi che sapete,” Cherubino’s aria from Mozart’s Le nozze di Figaro and Jacques Offenbach’s “Tu n’es pas beau, Tu n’est pas riche” from his operetta La Périchole. Leonard’s suave phrasing and coy attitude easily refreshed this familiar Mozart chestnut, and Sáinz-Villegas’ fleet accompaniment gave a truer account of the aria, since in the opera staging, Cherubino is supposed to be accompanied by the Countess on guitar, which Mozart’s orchestration only simulates. But Sáinz-Villegas gave us the real thing, and it was enchanting.

Manuel De Falla’s stellar early 20th-century song cycle Siete canciones populares españolas deserves to be heard as frequently as the familiar Schubert song cycles from the previous century. A combination of traditional Spanish folk melodies and De Falla’s own inventive musical imagination, these songs vividly evoke the deep pangs of love and cruel fate in the unmistakable vernacular of Iberian culture, which Leonard and Sáinz-Villegas conjured with breath-taking artistry and dramatic conviction: from the caressing lines of “Nana,” a tender lullaby, to the tear-stained despair of “Asturiana” to the resilient defiance of “Polo.”

In the song cycle’s piano accompaniment, which I have performed, De Falla sometimes imitates the guitar’s bracing, idiomatic rasgueado technique. Even though De Falla’s scoring can create a reasonable impression of the guitar, the grand piano too easily overbalances even the best singer with these figurations. It was a revelation to hear Sáinz-Villegas’ brilliant flourishes so perfectly match the singer’s melodic might, especially in a bravura song such as “Polo.” The duo offered five of the seven songs, but I am certain Thursday’s enthusiastic audience would have embraced the entire cycle—and I missed De Falla’s fiery “Jota.”

Although Federico García Lorca is revered for his literary output, as a teen-ager he studied piano seriously and entertained thoughts of becoming a composer. Leonard and Sáinz-Villegas offered three songs from his collection Canciones Españolas Antiguas, that reveal considerable acumen.

Among the duo’s encores were the popular songs “Besame mucho” and “Celito lindo.”

This program also proved notable because it was presented by the La Jolla Music Society and San Diego Opera, the first time these august local arts organizations have ventured a co-production. According to the introductory remarks by the Music Society’s President and CEO Todd Schultz and San Diego Opera’s General Director David Bennett, future collaborations are indeed forthcoming.

This program was presented jointly by the La Jolla Music Society and San Diego Opera on December 1, 2022, at the Conrad Prebys Performing Arts Center in La Jolla, CA