New York’s edgy CompCord Ensemble opened NWEAMO 2016, the latest installment of San Diego’s most established new music festival, with a boisterous concert Friday evening at the San Diego Central Library. From CompCord’s opening salvo, Peter Jarvis’ “Smoke and Mirrors,” I was tempted to categorize their style as minimalism meets rock band. But although Lukas Ligeti’s insistent drum kit tended to dominate his three colleagues—violinist Lynn Bechtold, bass guitarist Dan Cooper, and lead guitar Gene Pritsker—by sheer decibels, over the evening it became clear that each CompCord player was simultaneously demanding our attention regardless of what their colleagues were playing.

Mark Kostabi at piano and Gene Pritsker
[photo by SanDiegoStory.com]

Think of a brood of suburban kids in the back of a station wagon, each demanding their parents’ attention on a long road trip.

As much as they could be corralled, these players were led by Pritsker, whose genial patience as director and spokesman were exceeded only by his fleet, skilled invention on guitar. Pritsker’s “Reproaches,” which he composed as a duo for Swarmius sax player Todd Rewoldt and himself, struck me as the program’s strongest offering: a congenial but smashingly virtuoso battle of jazz-inflected, athletic riffs taken at breath-taking speed and ornamented with nearly every sonic distortion imaginable.

For his ensemble, Pritsker wrote “Sisyphus—Sinner Condemned” in part to carry out the festival’s theme “Music and Myth.” Episodic but retaining its pulsing, angular motifs throughout, the 10-minute work included a recorded voice-over (voice-under?) that rather solemnly recounted the story of Sisyphus and concluded with a crashing, dissonant chorale of sorts. If Igor Stravinsky had lived a century later, I imagine this is what his “Soldier’s Tale” would sound like.

Ligeti’s pounding polyrhythms in his “3457” engaged the ensemble at full tilt, as did Cooper’s ballad without words “The Phoenix and the Turtle.” Not surprisingly, we heard more of Cooper’s seven-string bass guitar in his work, and I discerned in his opaque, asymmetrical themes the influence of Bartók.

For complexity to a useful end, I was drawn to Bechtold’s “Murmer” for improvisatory solo violin and 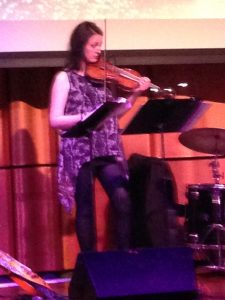 recorded percussion with whispered texts by the poets Emily Dickinson and Dorothy Parker. On the other hand, I thought Melissa Grey’s “Procrustean Bed” for violin and Merlin (a vintage, music producing, hand-held computer game) wandered aimlessly.

Complementing the music-making on the stage of the Library’s auditorium, John Young processed colorful visual images that floated on a screen behind the performers, moving and changing in synch with the pulse and mood of the music. What might have been distracting proved both illuminating and supportive.

[themify_box style=”shadow” ]This opening concert of NWEAMO 2016, featuring the CompCord Ensemble, pianist Mark Kostabi, and saxophonist Todd Rewoldt, was presented on April 8, 2016, in the Auditorium of the San Diego Central Library, 330 Park Blvd., in San Diego’s East Village. The second NWEAMO 2016 concert will be given in the same venue at 6:15 p.m. on April 9, 2016.[/themify_box]