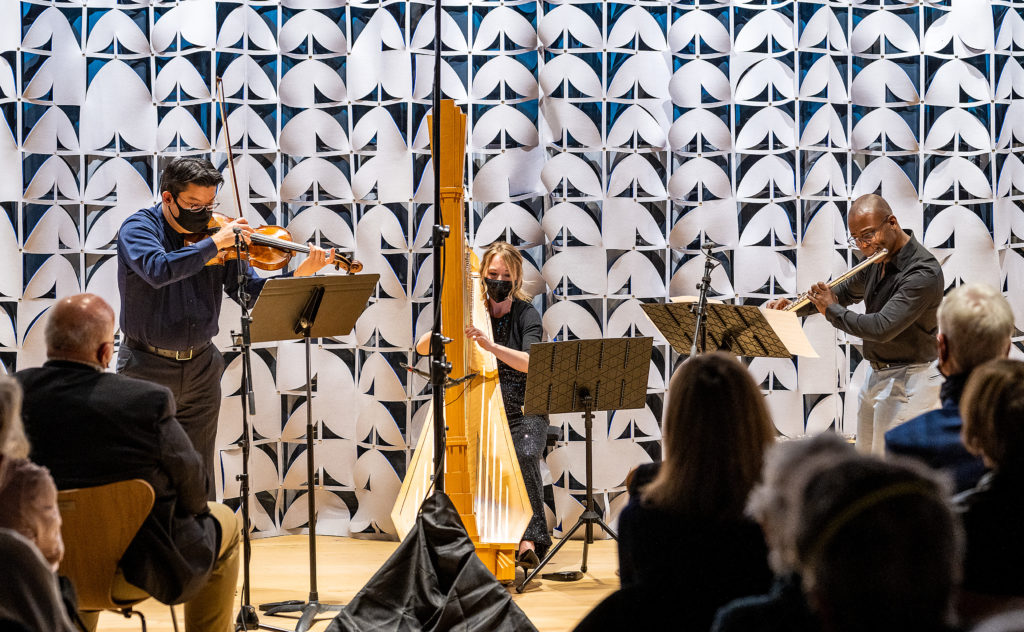 Pairing recent compositions from this century with a pair of works from the early years of the 20th century, the Myriad musicians filled the room with fresh, enticing textures and an ever changing kaleidoscope of timbres. Unlike the more typical trio instrumentation of three strings—or piano and strings—the Myriad Trio is comprised of flutist Demarre McGill, harpist Julie Smith Phillips, and violist Che-Yen “Brian” Chen.

The Trio opened with David Bruce’s 2010 “The Eye of Night,” four vivid but never conventional nocturnes that ranged from webs of austere modal ostinatos to airy roulades to agitated sections of brightly edged counterpoint. His crystalline architecture of striking themes in unexpected juxtaposition captivates the attentive listener. I recall his moving violin concerto, “Fragile Light,” that Gil Shaham premiered in 2014 with the San Diego Symphony, as well as other works Bruce wrote for the orchestra when he was in residence that year. “The Eye of Night” was commissioned by Art of Elan, and the Myriad Trio gave a radiant account of this fine score.

Timo Andres’ recent single movement ”Precise Sentiments” covered less territory than Bruce’s composition, but proved equally compelling. In lieu of Bruce’s fluid textures, Andres built sections based on terse, punchy motifs strung together, alternating with flights of busy motor rhythms. He assigned the harp strident, strongly accented chords that propelled the center portion of the piece. Like Andres’ earlier work “Shall We Gather at the River,” which he played on a solo piano recital for the Carlsbad Music Festival in 2012, he ended “Precise Sentiments” with a slow, understated chorale. A symbol of hope, perhaps.

The Trio gave a compelling, ebullient account of Claude Debussy’s 1915 Sonata for Flute, Viola, and Harp, the work that gave Myriad its instrumental template. Myriad’s polish and sparkling ensemble gave one of Debussy’s valedictory compositions unusual poignancy. Chen’s precise attacks and lustrous lines proved the perfect foil for Phillips’ articulate finesse in spite of dense figuration. And if there is a flutist with a richer, more effulgent tone than McGill’s, I have yet to encounter the performer.

George Gershwin’s jazz-inflected Three Preludes for solo piano were offered in an uncredited arrangement as the program’s finale. After Debussy’s complexities they seemed slight, but Myriad gave these familiar pieces persuasive charm. The Trio’s encore was “La Cupis” by the French Baroque composer Jean-Philppe Rameau.

This concert was presented by Art of Elan at the Mingei International Museum in San Diego’s Balboa Park on Thursday, January 13, 2022.