When it comes to visiting symphony orchestras, in San Diego none can touch the drawing power of the Chicago Symphony. The fabled musicians from the Windy City, under the baton of their esteemed Music Director Riccardo Muti, played to an enthusiastic, packed Copley Symphony Hall Wednesday (October 18) to open the La Jolla Music Society’s 2017-18 season. 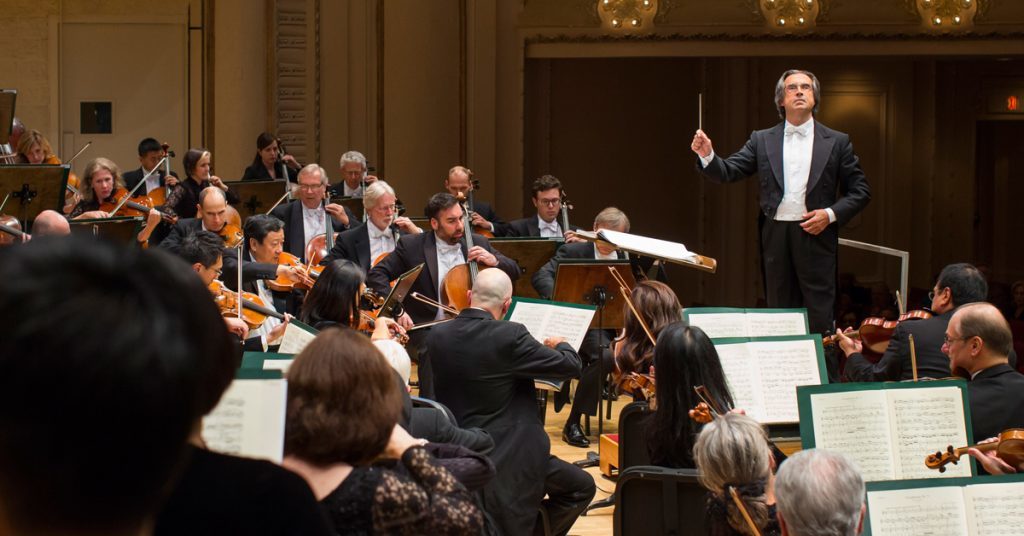 To be honest, under most circumstances, perusing a program of Schubert, Mozart, and Robert Schumann would send me in search of a substitute to review such a concert. The stylistic range covered by these three composers is not that great, and the new commissioned piece by the orchestra’s composer-in-residence Elizabeth Ogonek (performed for the Berkeley audience last weekend) was not on the San Diego program. But attending the Chicago Symphony transcends considerations of repertory. I would walk across town just to hear Chicago play the National Anthem.

As Muti and crew made their way through the opening movement of Franz Schubert’s familiar Symphony No. 8 (“Unfinished”), many of those primary Chicago virtues quickly came to the fore: its grand spectrum of deftly graduated dynamics; its fresh, vibrant take on themes we have heard a thousand times; a burnished low brass brigade that infused the orchestra with a smoldering authority that takes care not to overpower, and a robust cello section that that can turn out solo lines with the impeccable unison of a single player. And the mysterious Andante con moto—the only other movement of the “Unfinished”—offered an unending stream of tender, liquid woodwind solos that could melt even the most hardened heart.

In my experience, there are few conductors as calmly focused or as effective as Muti on the podium. In bristling rapid movements such as Schumann’s Scherzo in the Second Symphony, his gestures remained precise and compact, barely visible from the audience, while in that symphony’s broadly constructed Adagio, his arms extended in modest but graceful curves to fit the composer’s sublime themes. Describing the orchestra’s response to Muti, I keep rejecting the term precision, because it suggests a mechanical overtone, a trait far from Chicago’s profile. Rather, the orchestra and conductor worked in complete, unblemished unity, having left all effort and stress on the rehearsal room floor.

Unlike Schumann’s more popular “Rhenish” Symphony with its audience friendly programmatic character, his Second Symphony in C Major, Op. 61, is his most purely classical work. In an offhand comment, the composer even called it his “Jupiter,” referring to Mozart’s last symphony, No. 41, also in C Major. Chicago’s account of the Second Symphony proved both robust and polished, notably in the brass-rich outer movements. Muti brilliantly exposed the opening movement’s emotional turbulence, harnessed it in the Scherzo, adroitly revealed the Adagio espressivo’s contrasting, exalted Romantic longing, and resolved everything in the rhapsodic, life-affirming finale.

Principal Clarinet Stephen Williamson’s ecstatic virtuoso interpretation of the Mozart Clarinet Concerto, K. 622, left the Copley Hall audience breathless. Reviewing Williamson’s performance with the orchestra in Orange County (on the way to San Diego), Los Angeles Times’ music critic Mark Swed found it too much of a good thing. I thought Williamson’s take was nothing less than stellar, and his mastery of sonic beauty in every register of his instrument—especially since Mozart makes the clarinetist race from high to low and back in the most daunting passagework—was miraculous.