To continue their To the Earth online festival, San Diego Symphony Music Director Rafael Payare and Festival Curator Steven Schick offered their second installment on Wednesday, music to celebrate the midday: Noon. Works such as Haydn’s Symphony No. 7, “Le Midi” (“Noon”) and Debussy’s “Prelude to the Afternoon of a Faun” established an obvious thematic connection, while “Vitrales de ámbar” (“Windows of Amber”) by Gabriela Ortiz and excerpts from Tan Dun’s “Water Music for Percussion” provided welcome sonic contrast, if a less than evident thematic link. 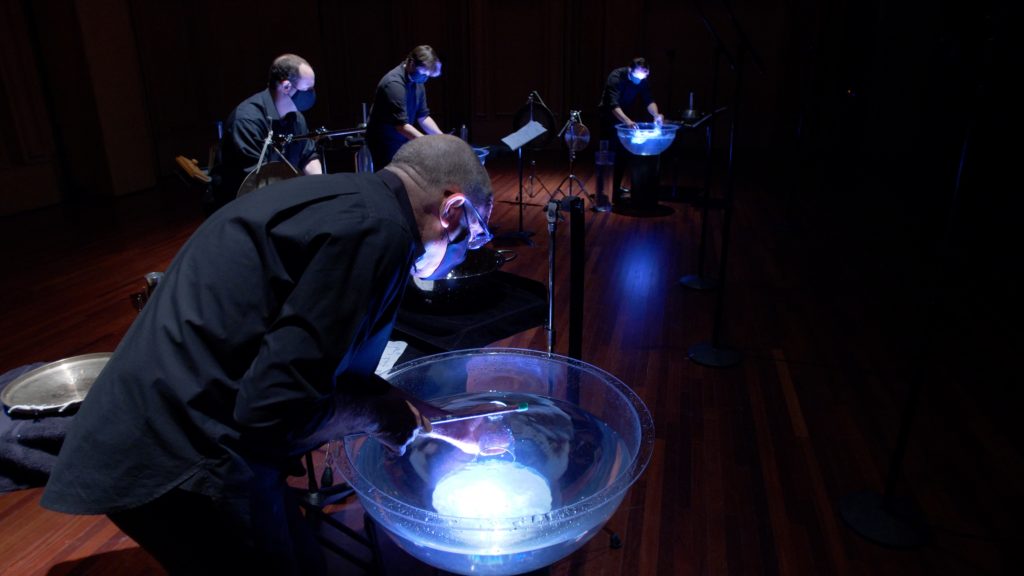 Payare and the San Diego Symphony gave a striking, joyous account of this early Haydn Symphony No. 7 from 1761, a work whose extensive first-chair solos clearly suggest a relationship to the sinfonia concertante, a genre that some consider an 18th-century compromise between the concerto and the symphony. Concertmaster Jeff Thayer’s commanding solos in the opening movement and his eloquent duos in the Adagio—played with complementary panache by Principal Cello Yao Zhao—as well as sparkling duets by Principal Flute Rose Lombardo and flutist Sarah Tuck increased the pleasure of this spirited symphony.

The orchestra responded with lithe precision to Payare’s crisp, driving tempos, especially in the vibrant finale. Playing in standing formation in a wide semi-circle in the new Rady Shell at Jacobs Park, this streamed performance projected the strong, energized ensemble of this appropriately configured classical period orchestra—well-balanced strings with a few winds—that we experience in Copley Symphony Hall only with the full orchestra on stage.

Arnold Schoenberg arranged numerous large orchestral works for chamber concerts he held in early 20th-century Vienna, and Schick chose to conduct his arrangement of Debussy’s “Prelude to the Afternoon of a Faun” for 12 players to open this concert from the Rady Shell. The chamber version of this familiar piece does give greater prominence and presence to the delectable wind solos, although the mere quintet of strings on stage still brought to mind the lush support of an entire orchestra string section as I listened to this deftly shaded account of “Faun.” Debussy’s midday portrait sounds more languid than Haydn’s noontime effervescence, but both moods are possible at noon.

Appreciation of the gifts of contemporary Mexican composer Gabriela Ortiz are rightly expanding on this side of la frontera—she is the resident composer at this year’s prestigious Ojai Festival—and her “Vitrales de ámbar” provides ample evidence of her bright musical imagination and masterful orchestration. Her four highly engaging movements of this chamber work are animated by pulsing, angular themes, frequently expressed by piquant mallet percussion instruments and spurred on with drumming that suggests a Latin dance beat, without falling into cliched popular genres. The composer has explained that she was inspired not by stained-glass windows, but rather by the blaze of vibrant color she observed watching monarch butterflies soar together in migratory flight, which her “Vitrales de ámbar” has most gracefully captured in music.

Among the most moving major productions I have experienced in decades of reviewing is the 2012 La Jolla SummerFest performance of Tan Dun’s Water Passion after St. Matthew, conducted by the composer. His “Water Music for Percussion Ensemble” takes one of the unique aspects the his Water Passion—creating sonic beauty by manipulating water sitting in large glass bowls—and allows four percussionists to do with water what a string quartet does with sophisticated musical instruments.

Schick and members of the orchestra’s percussion section—Principal Percussion Gregory Cohen, Erin Douglas Dowrey, and Andrew Watkins—gave a mesmerizing account of this brilliant work, a literal cascade of contrasting sounds, accents, and rhythms. Playing on the darkened stage of Copley Symphony Hall with illumination provided by bright lighting below the glass bowls, like the Water Passion, this performance was nothing less than sacred ritual.