San Diego’s annual New West Evolving Arts and Music Organism–also know as the NWEAMO Festival–opened Saturday, May 16, with a program streamed live on YouTube from Seoul, Korea. The new music Festival, a creation of San Diego State University resident composer Joseph Martin Waters, customarily spills over a weekend of performances on the university campus just before the spring semester comes to a close. Under the current quarantine, however, the university is completely closed, and live performances anywhere in the state are still not licit.

So Waters enlisted his Korean colleague Jeonghyeon Joo, a virtuosa on the traditional Korean haeguem who has appeared in the last two NWEAMO Festivals, to perform from Korea with harpist Suenghee Han. In the photo below of Korea’s PHASE ensemble, the featured guest ensemble at the 2019 NWEAMO Festival, Jeonghyeon Joo sits at the center of the quintet, holding her haeguem, a two-stringed, bowed instrument the size of a viola, but played in upright position like a cello. Although for this performance Suenghee Han played a typical western concert harp, the sounds of the instruments from different musical cultures blended gracefully: the harp’s percussive attacks and floating clouds of harmonic clusters complemented the sinuous line and slightly nasal, sustained timbre of the haeguem. 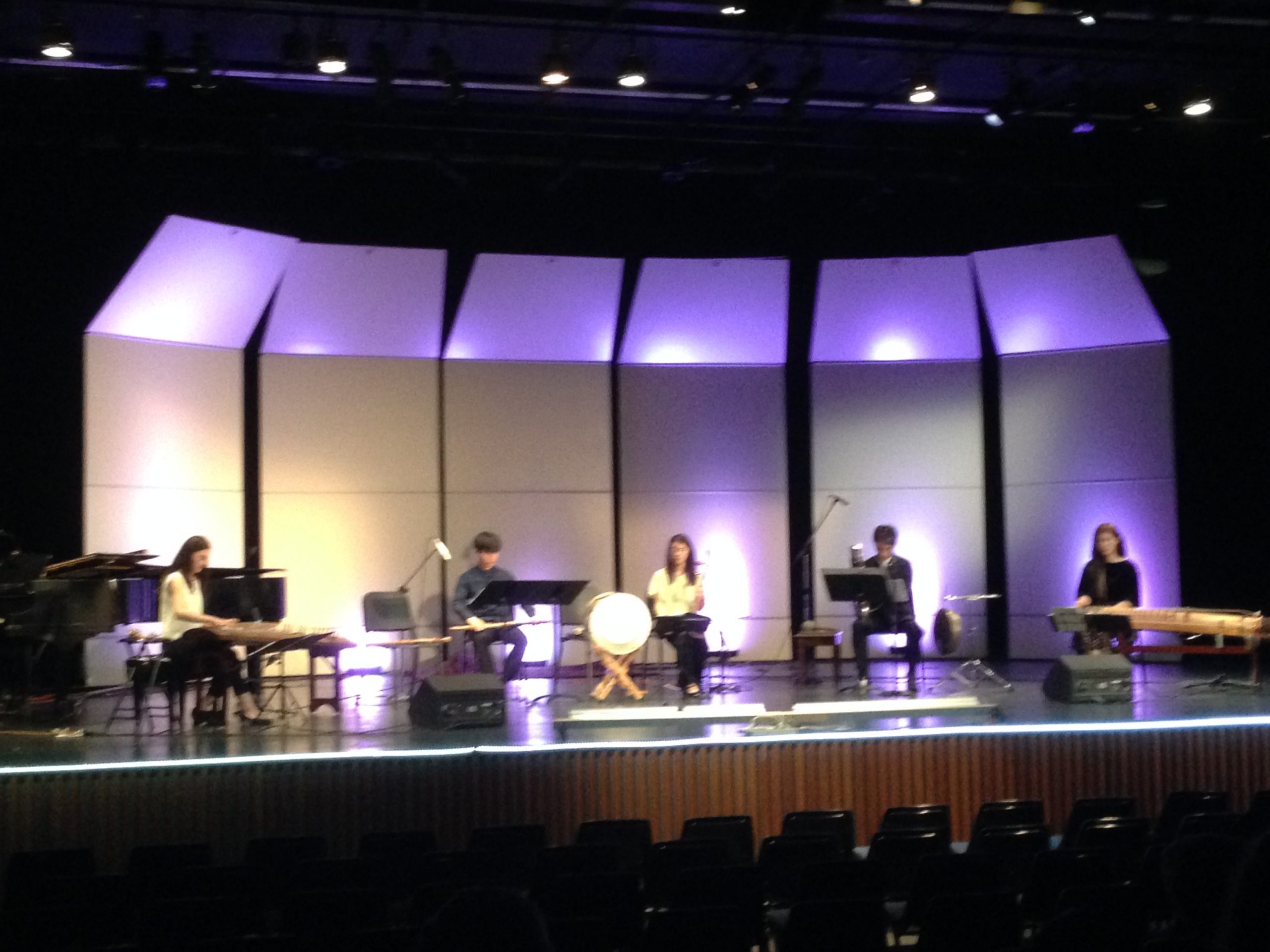 Much of the program was devoted to Korean music, including Texu Kim’s 2013 “Zezhu” in an arrangement by Joo and Sungkuk Son, an energetic, at times highly charged post-modern tone poem expressing the amazing power of bodies of water. In program notes on his website, the composer explains that the work’s title means “water” or “natural flow,” an important Taoist principle. Joo’s haeguem projected nervous, pulsing themes to create an edgy surface tension that nevertheless moved over a slow pulse, while Han’s harp  countered with bright flourishes and angular counter melodies. “Zezhu” presented a satisfying balance between a contentious repartee between the two voices at the center and a more meditative resolution towards the conclusion. San Diegans encountered Texu Kim in San Diego Symphony concerts earlier this season (February 28 & 29), when the orchestra performed his well-received “Spin-Flip” under the baton of guest conductor Eun Sun Kim.

In contrast, contemporary Korean composer Sngkn Kim’s “Music for Haeguem and Harp” offered a more refined, almost Impressionist tableau in which the haegeum‘s languid, sustained themes suggested intense yearning, adorned with delicate, short glissando motifs from the harp. The haegeum‘s characteristic wide vibrato at times suggests the human voice, which made it the ideal instrumental stand-in for the vocal line in Joe Waters’ existentialist ballad “Things,” which the duo gave a particularly probing and sensitive performance. It brought to mind countertenor Rodolfo Giron’s winning performance of the ballad in the 2017 NWEAMO Festival at S.D.S.U.

Joo and Han closed their program with Junghae Lee’s setting of “Two Korean Folk Songs.” including “Arirang,” a beloved traditional song revered in both North and South Korea and known in North America through its many attractive choral arrangements. Some sources trace the origin of  the sweetly melancholic “Arirang” to a touching love lament penned some 600 years ago. In more recent history it became a song of fervent national identity during the Japanese occupation of the Korean peninsula during the first half of the 20th century. Lee’s arrangement and the duo’s performance captured both the romantic and patriotic qualities of “Arirang.”

Today, May 17, at 2:00 p.m., the NWEAMO Festival will offer another musical presentation on YouTube.