As sure as Thanksgiving is just around the corner, stores and malls everywhere are urging us to start shopping for the upcoming Christmas season. Although All Is Calm: the Christmas Truce of 1914 may appear to have a holiday theme, this unusual oratorio is really about both the brutality of war and the conviction of those conscripted in its service that warfare a scourge on the human spirit. 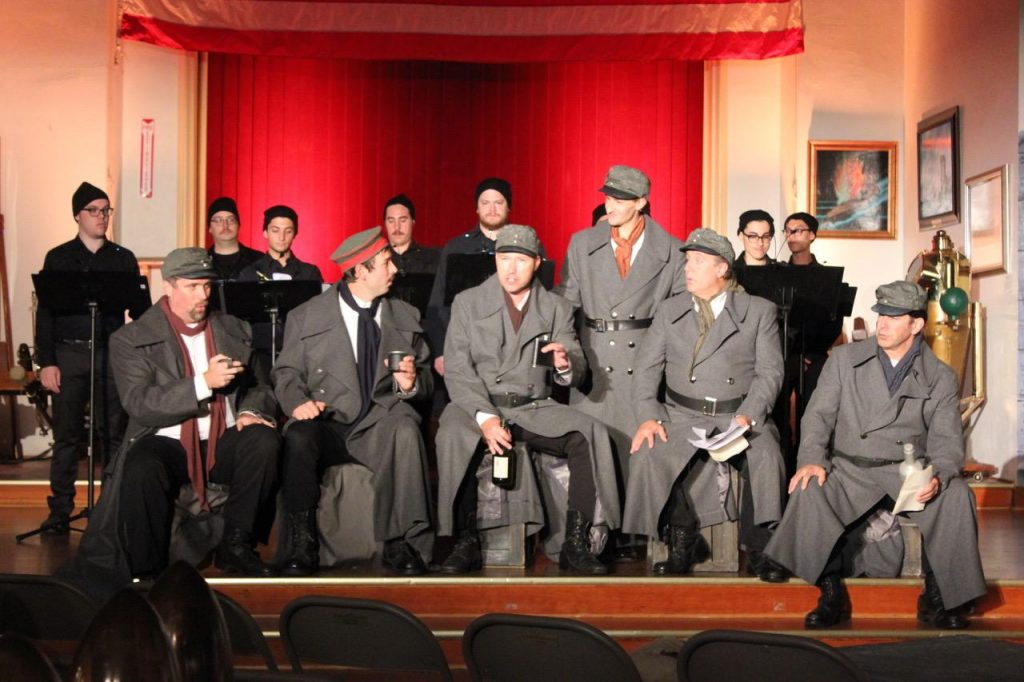 Bodhi Tree Concerts’ eloquent production of this work—appropriately presented November 17-19, 2017, in San Diego’s Veterans Museum at Balboa Park—brought together the sumptuous choral sound of the men from SACRA/PROFANA, the dramatic acumen of Bodhi Tree Concerts, and the disciplined stage direction of Jacob Bruce. The result was an emotionally rich, trenchant journey whose pacific message emerged more persuasive than most fluent oratory.

Based on historical events of spontaneous peaceful exchanges among soldiers from opposite sides of the World War I front lines during the Christmas of 1914—the war’s first months of combat—All Is Calm narrates the patriotic build-up to the war, the ugly reality of the actual combat, and the soldiers’ desire for peace during a holy season each side celebrated as the birth of the one named The Prince of Peace.

A glance at the All Is Calm program, with its long list of popular and traditional ballads as well as Christmas carols, might suggest the work is a review, but it is more than that. Peter Rothstein devised a narration taken from the diaries of soldiers and politicians from both sides that unfolds the story, and arrangers Erick Lichte and Timothy C. Takach expanded some of the carols.

For example, Lichte combined similar English “Wassail” carols set in different modes into a single deftly complex choral arrangement that proved surprisingly moving. And after including traditional versions of “Silent Night” in both English and German, the arrangers developed the “all is calm” motive into an anthem that captured the work’s theme in an impressive fashion. And although the arrangements of some traditional songs were merely simple and obvious, others displayed sophisticated harmonic invention that was communicated with unfailing choral discipline and glowing sonority from the men of SACRA/PROFANA under the astute leadership of Artistic Director Juan Carlos Acosta.

The Veterans Museum at Balboa Park is actually the latest transformation of the former chapel of the Navy Hospital in Balboa Park. With the room’s stained glass windows and resonant acoustics, choral singing proved both welcome and well-supported. The chapel’s former chancel served as a kind of stage, whereon the chorus members sang, standing in rows behind the soldiers who enacted the story at the chancel’s edge.

Although some songs were sung in German, French, and Dutch, most of the songs and narration were done in English—but not American English. Thanks to the coaching of Vanessa Dinning, we heard pronounced Welsh and Scottish accents, as well as accents from England’s varied districts and classes. In a more elaborate production, it might have been dramatic to have the German soldiers’ stories spoken in German with English supertitles, but Dinning decided wisely simply to give the Germans’ testimonies in English with a passable generic German accent.

Bodhi Tree Concerts in collaboration with SACRA/PROFANA, San Diego Opera, and FAB United presented Peter Rothstein’s “All Is Calm: The Christmas Truce of 1914” on November 17-19, 2017, at The Veterans Museum at Balboa Park. The November 18 2:00 p.m. production was viewed for this review.

All Is Calm Program