Sapience is defined as wisdom, particularly wisdom gained from experience. As applied to Diana Burbano’s play of the same name, running at Moxie Theatre until February 20, it means unexpected insight associated with the notion of communicating in unusual ways. 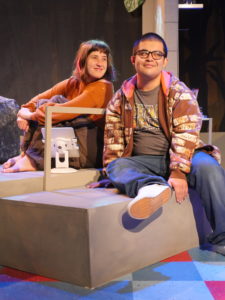 The setting is a zoo, which also houses a research facility. The primary object of research is an orangutan named Wookie (Nancy Ross). The primary researcher is Elsa (Mariel León), and her work involves teaching language to Wookie, using a specialized tablet with symbols on it that give Wookie some opportunity to express her desires, mostly for food such as apples or grapes. Elsa’s boss is Jason (Alexander Guzman), who stops by not just to check on her work but to flirt in hopes that she’ll flirt back. Miri (Vanessa Duron, who also directed) is in charge of cleaning the facility, and she brings her son, AJ (Enrique Xavier Martinez) along. AJ is mostly nonverbal around other people, but he has the ability to talk with Wookie, who carries on conversations with him.

Magical realism at work, to make a point: AJ and Elsa are both on the autism spectrum, but in different ways. Miri and Jason adapt to this reality, with varying degrees of success. These adaptations are often subtle, and audiences learn to appreciate the subtleties. The audience may include those on the autism spectrum, and performances are sensory friendly, or designed to include methods to keep the production from triggering its on-the-spectrum audience members. The primary device used in this production is a red light that is installed on the set (scenic design by Adam Parrocha, lighting design by Colby Freel) which lights ahead of any potentially triggering event, mostly sounds (sound design by Mason Pilevsky). I found myself watching for the red light to come on and then paying attention to what might be triggering. Sometimes, it was pretty subtle, other times it was obvious. 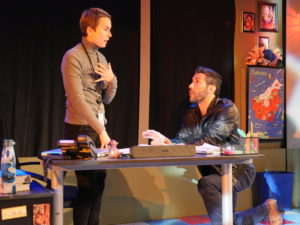 Moxie has also engaged Samantha Ginn as an inclusion specialist. Ms. Ginn’s work in this area focuses on helping theatre companies stage sensory-friendly versions of their productions, as well as working with what are called neurodiverse actors and seniors with Alzheimer’s disease. One of the performers lists work with Ms. Ginn in his cast bio.

It is no surprise that Ms. Ross, as Wookie, takes the prize for most animated and varied performance, as Wookie is a delightful character and Ms. Ross plays her in a delightful manner. She embraces all of the elements of magical realism, and the other characters are most alive when they are interacting with her. Mr. Guzman has the least sympathetic role, as he not only has to flirt to little avail, but his character is diagnosed with cancer, more or less out of the blue. The other actors give disciplined and polished performances that, unfortunately, don’t do much to alleviate the play’s repetitive and episodic nature. At least the 105-minute, no intermission run time can be made enjoyable by watching one of the most effective technical productions Moxie has staged.

Moxie sponsors talkbacks after each performance and has made a commitment to continue to work with the neurodiverse community. I hope that the next effort in this direction will be able to take advantage of a stronger play.