After presenting three consecutive nights of Working Title, Project [BLANK]’s ambitious multimedia art exhibit and concert, last weekend at St. Paul’s Cathedral, I would be the first to say this crew deserved well-earned time off. But Saturday at Bread & Salt, Project [BLANK] was back in action to present Francisco Eme’s Treatise on Violence. 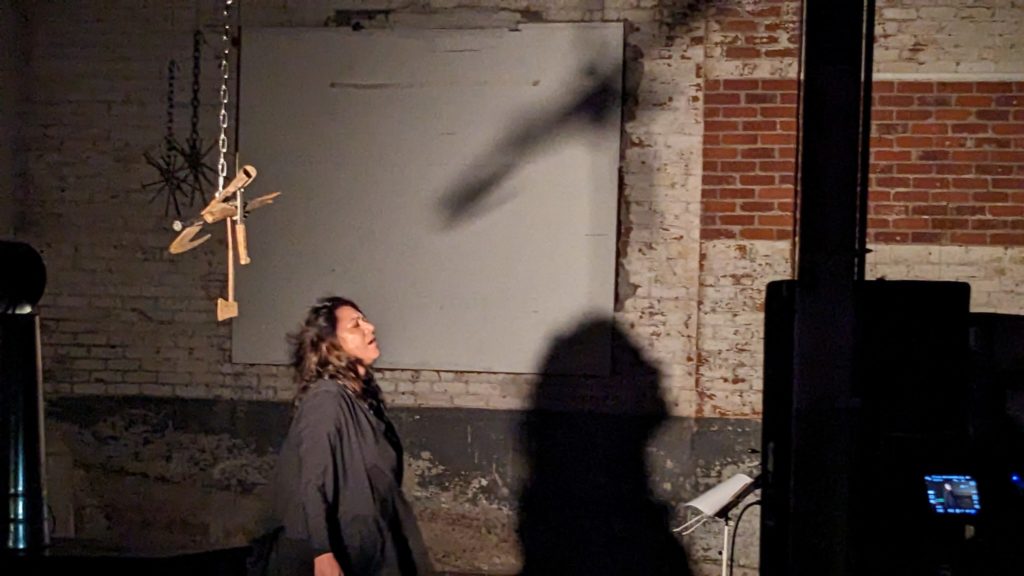 If you hold a very flexible definition of opera, Eme’s creation might be called a one-act chamber opera. Performed on a bare stage, Treatise on Violence is a complex, immersive electronic tone poem augmented by two singers, a flutist, and video projections. The composer offers in stark succession musical essays on types of violence: the disappeared ones, police brutality, violence against women, and political prisoners.

Eme’s sonic palette reminded me of 1950’s musique concrète, an early stage of electronic music production. A dense collage of sirens, urban street noise—even a clip from the classic country ballad “I fought the law, and the law won”—Eme’s high decibel music pumped out from speakers that surrounded the audience. In the opening section dedicated to the “disappeared ones,” Eme has the flutist deliver short, brutal, percussive themes at an unrelenting pace to symbolize the sadism of South American dictators who “disappeared” their political foes by having them pushed out of helicopters far out at sea. Flutist Wilfrido Terrazas skillfully carried out this daunting assignment with chilling brio.

I was impressed with Leslie Ann Leytham’s aria, a dark vocalise that morphed into a setting of the poem “It Rained Fire” by the Venezuelan poet and journalist Miyó Vestrini. Leytham’s commanding mezzo-soprano hurled her arcs of anxious declamation as the video above her charted a city’s wartime destruction. In the section devoted to political prisoners, vocalist Monica Camacho started a low-pitched incantation that gradually rose in pitch and intensity to the top of her powerful range. A third singer, Bonnie Lander, chanted briefly in a hazy video that appeared in the section devoted to violence against women.

With the laudable exception of the protest song, musical forms do not easily lend themselves to advocacy, no matter how virtuous the cause. Beethoven’s sole opera Fidelio could be interpreted as a panegyric for liberty, but it is an exception. Eme has boldly undertaken the task of moving audiences to understand or even to protest a list of serious injustices, a tall order to say the least. I hope this is not the final version of his Treatise on Violence: there is unrealized potential in his project.

‘Treatise on Violence’ was presented by Project [BLANK] in partnership with Bread & Salt in San Diego’s Barrio Logan neighborhood, where it was performed on January 14, 2022.