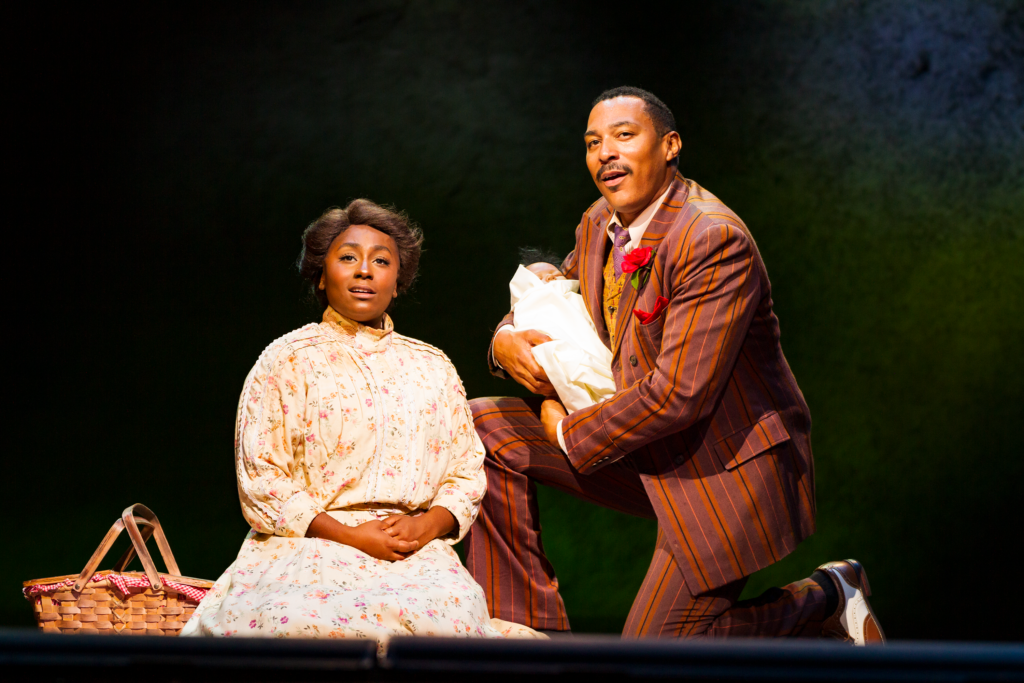 One of the major reasons why the 1998 epic, Ragtime, continues to be produced around the world, is because it is a relevant American story. Many of the themes involving racism, immigration and generational conflicts are topics that strike a chord with modern audiences.

These messages are explored throughout Moonlight Stage Productions strong staging of the haunting tale.

Based on the 1975 E.L. Doctorow novel, the adaptation focuses on three early 20th century New York metropolitan area residents from different backgrounds. Mother (Bets Malone) is a member of a WASP family who lives in New Rochelle, a Black musician, Coalhouse Walker Jr. (Charl Brown), plays music in Harlem and a Jewish immigrant, Tateh (Geno Carr), desperately tries to make a living for himself and his daughter (Leila Manuel) by drawing silhouettes on the Lower East Side.

Terrence McNally’s book, and the musical numbers from composer, Stephen Flaherty, and lyricist, Lynn Ahrens, create empathy for the main characters. As the plot goes into darker territory, theatregoers become increasingly invested in the lives of the sympathetic individuals and their families.

Mother, Coalhouse and Tateh are full of depth, partially because of the strong performances from the leads. Malone, Brown and Carr are riveting to watch, especially during very serious numbers.

Director and choreographer, John Vaughan, presents a New York that switches from joyous to bleak and back again.

Vaughn stages songs where members of the company beautifully harmonize together, as in the Prologue: “Ragtime,” “Success” and “New Music.”

His dance movements are highlighted in comedic and upbeat numbers, including ‘The Crime of the Century,” “Gettin’ Ready Rag” and “What a Game!”

Each of the melodies are played by a grand orchestra, led by music director and conductor, Elan McMahan. All of the musicians are worthy of the sprawling narrative, especially during tunes that focus on the ensemble.

Despite featuring the majority of the songs from Flaherty and Ahrens, there is a cut from the beginning of Act Two that I did miss. In the original Broadway production, the tune “Harry Houdini, Master Escapist” opens the second half of the tale. While this was cut in some other productions, I have always enjoyed the mysterious sequence, since the scene ominously foreshadows events that occur.

Both a critique and a celebration of America, Ragtime still packs an emotional wallop. The big show is a great fit for the Moonlight Amphitheatre.

Posted in THEATRE REVIEWS and tagged A Man of No Importance, Anastasia, Billy Bathgate, Lucky Stiff, Once on This Island, Seussical