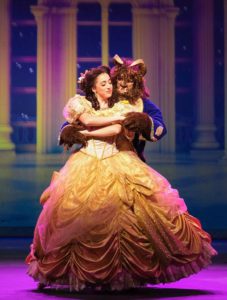 The animated film version of Disney’s Beauty and the Beast, featuring music by Alan Menkin and lyrics by Howard Ashman, was a watershed moment for the Disney conglomerate. A hit in the movie theatres, it soon spawned a stage version with Menkin writing additional songs and lyricist Tim Rice replacing Ashman, who had tragically died of AIDS. While some New York critics turned up their noses at a Disney musical, the show was a big success, running for thirteen years and prompting Disney to launch an entire series of Broadway musicals based on its animated films.

Though the Grimm brothers wrote a version of the fairy tale, Linda Woverton’s book is based on the French version of the story. Belle (Jenna Lea Rosen) is a bright, bookish, young girl who lives in a small village with her eccentric father, Maurice (Johnny Fletcher). Belle has drawn the attention of the heavily muscled braggart, Gaston (Evan White), but she rejects his advances. Meanwhile, in the town’s castle lives a fearsome Beast (Michael Deni), who was made so by a witch’s spell. The spell has affected the castle’s staff as well: Lumiere (Michael Paternostro), the maître’ d’, is a candelabra, Cogsworth (Jerald Vincent), the castle’s manager, is a clock, and Mrs. Potts (Bets Malone), the head of the kitchen, is a tea pot. 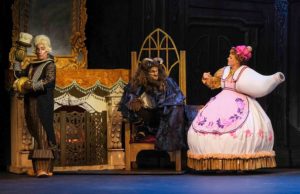 Michael Paternostro as Lumiere and Bets Malone as Mrs. Potts

As Belle finds her way to the castle, she is both repelled and fascinated by the Beast, and he, in turn, realizes both that he is attracted to her and that she could be the person who could break the spell. But, the Beast has lost his understanding of courtship and must rely on the not-always-sage advice of his staff. He is also on a deadline, as the spell, symbolized by a magic rose, is causing his slow-but-steady death.

In translating the 84-minute film to a Broadway musical, some over-stuffing occurred: Moonlight’s version runs close to three hours, including one intermission. There’s plenty of tuneful music, expertly led by Music Director and Conductor Elan McMahan, and lots to catch the eye from Jamie Torcellini’s direction, combined with Bill Burns’ choreography. Parents may wish to consider how their children might respond to such a long sit before purchasing tickets, however.

The principal cast members perform uniformly well. Ms. Malone, a Moonlight stalwart, stands out mainly because she sings the familiar title song and leads the rousing “Be Our Guest,” which should have, but doesn’t, conclude Act 1.

The production, as is a Moonlight custom, is borrowed. The scenery comes from the Citrus College Music Theatre Workshop and the costumes from 3-D Theatricals. These are enhanced by Jean-Yves Tessier’s lighting design and Jonathan Infante’s projection design. Sound design at Moonlight is always both complex and a work in progress, and Jim Zadai’s sound design improved on the one he did for the previous production, Once on This Island.

It was a warm evening at Moonlight on opening night. Disney’s Beauty and the Beast has its scary moments, but ultimately it’s a warm and family-friendly show. I suspect that it will generate heat from ticket sales and boost what almost-wasn’t-but-now-is its 40th Season.