A radiant Michelle Bradley captivated San Diego Opera patrons in her nonpareil recital Saturday at The Conrad in La Jolla. The voice that shook the Civic Theatre rafters two seasons ago as Aïda suffused the Baker-Baum Concert Hall with her warm yet impassioned soprano in a sophisticated program of art songs, accompanied by the impeccable pianist Brian Zeger.

Bradley’s program choices reflected her convictions as an African-American musician: she lifted up songs by Lee Hoiby and Samuel Barber written for the iconic diva of the last century Leontyne Price, as well as Florence Price’s settings of poetry by Langston Hughes and Paul Laurence Dunbar, and she capped the program with a generous selection of spirituals. If this strikes the reader as pedagogic, banish the thought, because Bradley’s passion and vocal prowess mesmerized her audience with every phrase. 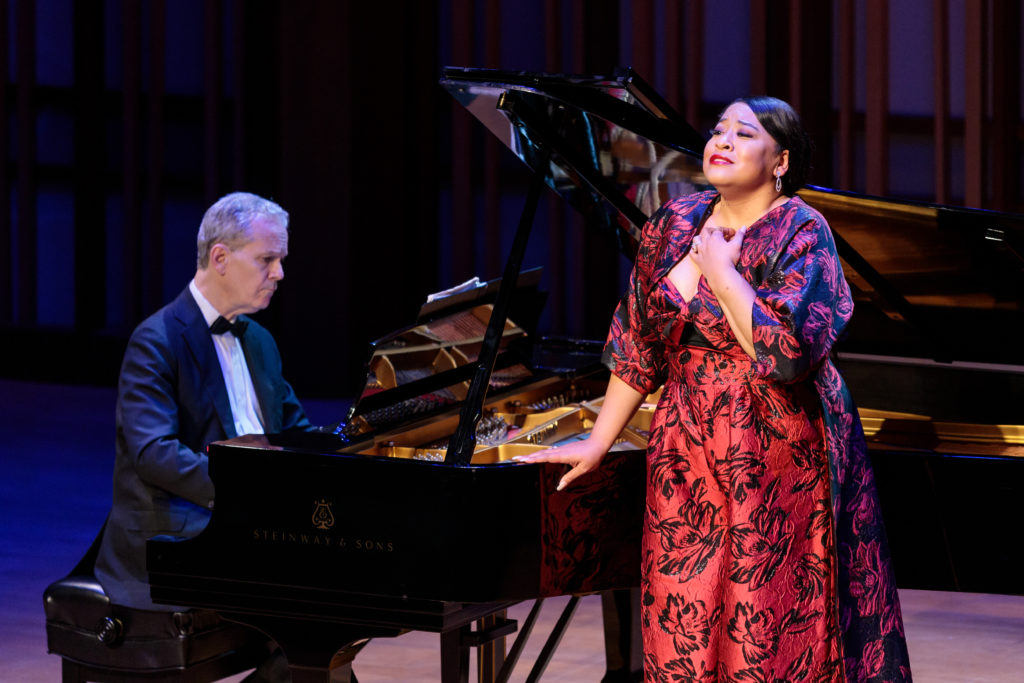 Her dramatic account of Barber’s Hermit Songs—a cycle of 10 songs on poems written by late medieval saints and monastics that Barber and Leontyne Price premiered at the Library of Congress in 1953—took the Baker-Baum audience on an exhilarating pilgrimage. Running the gamut of topics spiritual to sensual, the poems evoke a beer-soaked heavenly banquet, a playful exchange between a monk and his cat, the solitude of a bell struck at midnight, Mary’s sorrow at the crucifixion of Jesus, an illicit nocturnal rendezvous, and several other vivid scenes, each brilliantly illuminated by Barber’s rich harmonic palette, Bradley’s wide array of vocal colors, and Zeger’s consummate keyboard skills. They captured the emotional depth of each poem and invited their listeners to savor each experience with their fervor.

Three songs by Florence Price proved equally moving. In a more just world, this composer would need no introduction, because in 1933 she was the first African-American composer to have their symphony premiered by a major orchestra—no less than the Chicago Symphony under Frederick Stock. Although Price was praised in the Chicago newspapers and she continued to compose some 300 works, due to a combination of racism and misogyny, after her death in 1953 she was almost completely forgotten. Only recently has her legacy been rediscovered and championed, and Bradley is part of that long overdue restoration.

Price’s “Hold Fast to Dreams,” based on a Langston Hughes text, billows with beautifully arched themes that challenged Bradley to traverse the lowest and highest extent of her range, which she managed with unfailing confidence. Readers may think they have never heard of Dunbar’s poem “Sympathy,” but Maya Angelou cribbed the opening line of its third stanza, “I know why the caged bird sings,” for the title of her best-selling 1969 autobiography. “Sympathy” opens with the innocence of a folk song but quickly turns boldly dramatic with fantastic leaps every time the poet says “I know,” which Bradley exploited with ringing conviction. In “At the Feet of Jesus,” another short Hughes poem, Bradley offered a preview of the spiritual ebullience she would unleash in her set of spirituals at the close of her program.

Three selections from Lee Hoiby’s Songs for Leontyne sounded like they could have been crafted in the Ned Rorem workshop, although “The Serpent,” Hoiby’s clever setting of  a Theodore Roethke poem about a snake that decided to become a singer, proved a humorous romp that brought about an audible chuckle from the audience.

When Bradley started to sing the spiritual “I Am Seeking for a City,” I immediately thought of the late Jessye Norman’s rich rendition of that spiritual, and Bradley did not disappoint that hallowed memory. In “Here’s One,” the lights dimmed slightly in Baker-Baum, and the room focused in a transcendent tranquility that I prayed would not end. The spirit of a revival powered “Witness,” “Honor,” and “He’s Got the Whole World in His Hands,” and I would have come forward had a call been offered. Realizing the power of her spirituals, Bradley assured her listeners that she was not attempting to persuade anyone’s personal beliefs, but rather to share the spiritual grounding that anchored her own life.

I do not believe anyone left the hall unconvinced of the solid ground on which her eloquent vocal praise is based.

This performance was presented by San Diego Opera in La Jolla’s Conrad Prebys Performing Arts Center on Saturday, November 20, 2021. It was repeated on Sunday, November 21 in the same venue.