A drip of black paint that is, in reality, made from an actual black diamond, several cardboard boxes that are not really made of cardboard, and a loud film of a downpour of rain that actually features no actual rain are all included in the exhibition “Lifelike” now on display at the Museum of Contemporary Art San Diego (in La Jolla). For art connoisseurs to kids, this exhibition is a fun-for-all-ages crowd pleaser. The idea behind this exhibition is called trompe l’oeil, which in French literally means “to fool the eye”; and oh, what fun it is being fooled when viewing this traveling show. 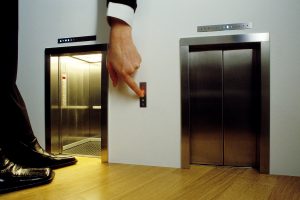 Many famous artists such as Vija Celmins, Chuck Close, Robert Rauschenberg, and Gerhard Richter are included in this exhibition chronicling the history of 1960s Neo-Dada, Pop, and Superrealism up through artists who work in similar traditions today. “Lifelike” was curated by Siri Engberg for the Walker Art Center in Minneapolis and this is the traveling exhibition’s third stop. Unfortunately, many stellar artworks have been stripped from the inaugural Walker Art Center exhibition; but even as the La Jolla version is a ghost of the original Walker installation, it thankfully has enough good works included to make the La Jolla version of “Lifelike” fun and worth going to see.

Two of the most iconic artists from the 1960s are included in the exhibition. One is Andy Warhol. Two of his famous Brillo Boxes are here, but they seem to have been included more for Warhol’s brand name rather than as significant works of trompe l’oeil. Warhol’s boxes were never convincing illusions but merely represented the ideas of mass production and popular culture. In this exhibition, the Brillo Boxes seem weak and tired attempts at illusion due to their seeming to be contextually misplaced in this exhibition.

The other iconic artist included in the show is painter Chuck Close, who came of age and fame in the late ‘60s with his large scale  Photo-realist paintings. In “Lifelike,” Close is represented by one of his most famous early acrylic paintings, Big Self-Portrait, 1967–68. It is a whopping 107 ½-inches tall. It is one of the most famous Photo-realist paintings ever created. The painting is based on a black and white photograph of the artist wearing horn rimmed glasses and smoking a cigarette. Every detail of the artist’s face―each small hair of his razor stubble, each large pore, and each small wrinkle of his face―is depicted in this important, billboard-sized piece of art history.

Two other special treats featured in the exhibit are by Robert Rauschenberg and Edward & Nancy Reddin Kienholz. Rauschenberg is represented by what appears to be a just delivered and opened parcel, which has been turned upside down. The box looks like it has received more than the usual punishment inflicted by a delivery service as it is all battered and bruised. The special quality of the artwork, entitled Cardbird Box II (1971), is the convincing illusion that master printer Rauschenberg created by using the commercial printing technique of offset lithography.

The printing technique uses process color inks (cyan, magenta, yellow, and black), which is the same printing method used to print magazines. Paper was printed and then painstakingly applied over an open box shape to give the illusion of an old beat-up cardboard box wrapped in tape. Using such an inexpensive method of printing to create this illusion is stunning. It is especially so when you look at other trompe l’oeil boxes in the exhibition, which were made with much more laborious methods and are not nearly as convincing in their effect as Rauschenberg’s effort.

The artwork by Edward & Nancy Reddin Kienholz is a door from an old Datsun pick-up truck. The artwork entitled Sawdy (1972) references Clarence Fred Sawdy, whose effects were used in the enigmatic, large scale tableau Five Card Stud (1969-1972) that indicted the state of racial tension between southern whites and blacks during the late 1960s. Five Card Stud was only displayed once in America before being bought by an anonymous Japanese collector who rarely allows anyone to view the actual work. The enigmatic artwork depicts a night scene of several actual circled cars with their headlights illuminating four white men who are castrating a black man.

Sawdy was created by the Kienholzes as a small scale relief based on the large tableau. The smaller work is the inside of a Datsun truck door suspended from the wall and has a slimy substance dripping from the bottom of the door’s window.  The artwork was actually made to seen with the truck’s window rolled-up and to be participatory in that a viewer is first supposed to approach the work and see one’s own reflection in the rolled-up window. Then, he or she is supposed use the truck door’s manual window crank to roll down the window to reveal a photograph of Five Card Stud’s heinous crime scene. Unfortunately in La Jolla, Sawdy is presented with the truck’s window already rolled down to prevent the viewer from seeing one’s own reflected image prior to seeing the crime scene. This presentation ruins the artists’ purposeful desire for the viewer to see his or her own reflected self before seeing the surprise of the shocking photograph, which castrates the power from the Kienholzes’ artwork and spoils the treat of viewing this special artwork. 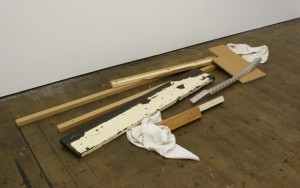 Another botched installation is a work by the artist duo Peter Fischl and David Weiss. The artwork is a room filled with paint cans and other painting implements entitled Empty Room (1995-96). The work is supposed to be installed so the viewer comes into a room that seems to be in the process of being renovated. In the La Jolla venue, it is crammed into a narrow hallway with yellow “caution tape” slapped on the entrance of the hallway to prevent one’s entry into the installation. To safeguard the poorly installed artwork, someone responsible for its installation felt the need to add the “caution tape” to the hallway’s entrance. This installation error again ruins the intention of the artwork.

Scattered around the exhibit are jewels of trompe l’oeil. One is a projected video of what looks like a rainstorm. In the video, Rain/Regen ( 2008), droplets of water seem to fall on the ground. After viewing the rainstorm one might notice that nothing actually gets wet. Then a weird feeling comes over a viewer—something isn’t quite right here. The surreal video by Thomas Demand is actually a stop action film composed of 7,800 still images of cellophane candy wrappers photographed on a floor. The sound of the rain is actually a recording of eggs frying in a pan. It’s pure magic.

Other jewels are Maurizio Cattelan’s miniature elevators. The thudding sound that each tiny door makes when they close and the clang of the bell when the doors open makes the artwork utterly convincing. Another jewel is a mere piece of cardboard propped against the wall by Swiss artist Ugo Rondigone. It is actually made of cast bronze. Another magical artwork by Matt Johnson is a package of American Spirit cigarettes that magically floats literally a half-an-inch up above the bottom of its vitrine.

An actual jewel is an artwork by Susan Collis. Forever Young, 2009, looks like a pile of used lumber with bits of plaster, nails and screws sticking out, and splattered with paint. Atop the pile is a slender piece of diamond plate steel. A few rags lay about, too. The humble looking mess of debris is actually made of some of the most precious materials available. You have to read the label of the work to find out what they are as Forever Young is literally made of precious gems, metals, and some of the most precious species of wood that exist. After viewing the artwork’s label, a viewer can literally look at the humble looking mess for over an hour to try and find all the extremely valuable materials that are included in the artwork (I did!).

The many fool-the-eye wonders do outnumber the duds in this fun exhibition. The list of included artists in the exhibition is also very large and includes some very important names from art history. Take your grandma! Take your kids! Take yourself!