A solo recital featuring bagpipe music is not something San Diego audiences experience with any frequency, but then the folks who flock to Bonnie Wright’s Fresh Sound series never expect typical fare when they enter Barrio Logan’s Bread and Salt performance space. Over the last 20 seasons, Wright’s quixotically eclectic programs have offered contemporary composers, improvisors and performers who either carefully avoid the standard repertory or do to it things that would send most staid music instructors into a paroxysm of agony. 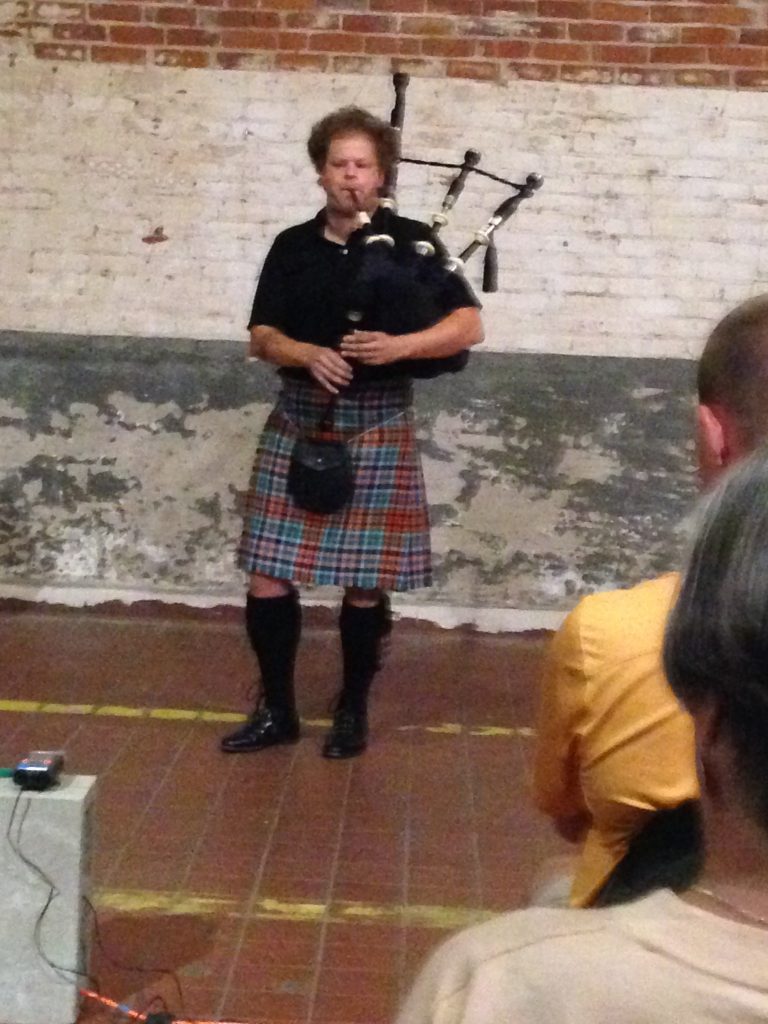 On Saturday (September 16), Matt Welch, accomplished performer on the Great Highland bagpipe, gracefully surfed over categories and starchy definitions as he served a banquet of dances, marches, and variations from the instrument’s traditional repertory, several of his own takes on these genres, as well as works by contemporary minimalist composers Philip Glass and Anthony Braxton. Explaining that traditional Scottish bagpipe music—for which the English term is pibroch—is the earliest manifestation of musical minimalism, Welch wove the old and the new into a seamless continuum.

As Welch worked his way through early straightforward marches, reels, jigs, and even sophisticated competition pieces such as “Highland Wedding,” his thesis became clear: because the bagpipe’s foundational drone limits modulations and thematic development outside the tonal bounds of the drone, the basic building block of bagpipe music is the single phrase repeated over and over with nuanced rhythmic variations. Or the Gospel of Minimalism according to Philip Glass and Terry Riley.

Inasmuch as the native habitat of the Great Highland bagpipe is the verdant Scottish moors, bringing such a sonically penetrating instrument indoors risked too much of a good thing in a contained space, but the large hall of Bread and Salt proved sufficient to accommodate Welch’s vibrant, unrelenting sonority.

Among the Welch’s more engaging contemporary offerings, Anthony Braxton’s “No. 217” stood out for pushing the envelope by introducing more sinuous chromatic melodies and edgy bent tones. Although Glass’s basic five-tone theme in “Two Pages” (1968) did not color outside the lines, Welch unleashed the dramatic power of its unrelenting drive. Welch’s own boldly assertive “High Street” suggested urbane sophistication in its spirited variations. However, Canadian composer Michael Neale’s “Where Do Elks Accumulate?” proved less inventive than its clever title.

Among Welch’s performing virtues I would include stamina—he played for over an hour and a half without a break—as well as technical and interpretive prowess that tamed an unyielding instrument to his will. If there were skeptics in the audience, I am willing to bet they were won over by his commanding performance.

This solo recital by Matt Welch was presented by Fresh Sound on Saturday, September 16, 2017, at Bread & Salt, 1955 Julian Ave., San Diego. The next Fresh Sound program is slated for October 27, 2017, and will feature the Michael Dessen Trio in the same venue.