Upon taking the stage Saturday night, the Gary Peacock Trio exuded mastery and a looseness that promised artistic treasures. Listeners, for the most part, were not disappointed musically although they were excluded from any verbal communication by their taciturn leader.

Contrabassist Peacock has a long and impressive resumé. With his colleagues, pianist Marc Copland and drummer Joey Baron, he treated TSRI’s full house to an evening of jazz played on a high artistic level. Choosing to eschew a program of tired standards, the trio delved into two hours of uncharted waters and often discovered unexpected musical treasures.

Peacock is not easily pigeonholed as a musician. Calling him a “jazz” bassist only serves to minimize the breadth of his enormous output and his long and varied career. He is best known for his work with the Keith Jarrett “Jazz Standards” trio (alongside drummer Jack DeJohnette), which has been working together for over thirty years. His present trio brings to mind a similar chamber music approach, often associated with the German recording label ECM. There is an airiness and a looseness that characterizes his ensemble play, and, alongside such stellar talents as Copland and Baron, a truly creative atmosphere was fostered. 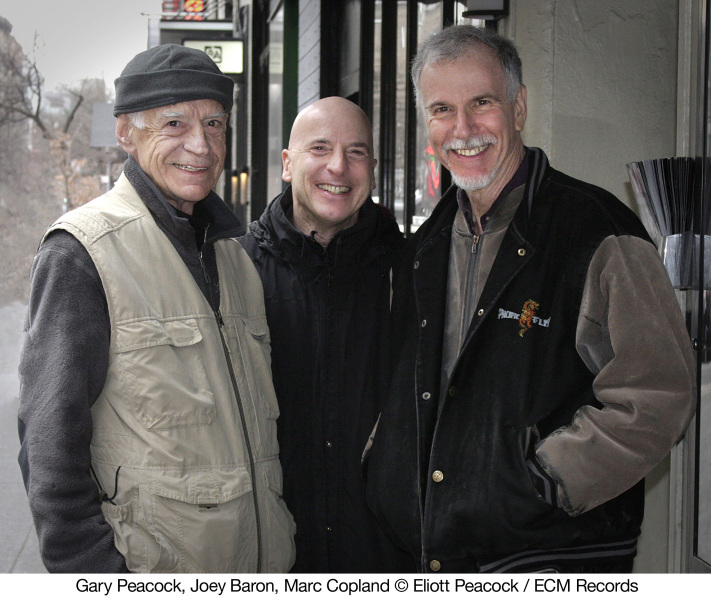 In fact, for me the work of both Copland and Baron stole the show. Baron brought a unique technical tool set to the proceedings. Although steeped in the bop/post bop traditions, his active awareness of current, freer and creative musical styles allowed for moments of transcendental timbral explorations that were fascinatingly unique and beautiful. I cannot remember ever hearing a “traps” player play with more variety. His impressively refined technique using just his hands sounded incredibly fresh. Every stroke was totally “locked in” to the musical groove and, by playing within each piece’s purview, he allowed for a creative explosiveness that was unexpected and vibrant.

Similarly, Copland presented subtle musical ideas that were fresh and, although quite subtle and undemonstrative, brought the music to an unexpectedly high aesthetic level. In many ways, Copland’s facility was so subtle that I doubt many non-musicians were aware of the extremely complex multi rhythms and poly harmonies he was playing. Yet, those complexities, almost self-effacingly played as they were, brought the multi-layered texture of this ensemble to a distinctly high level of refinement.

The evening was not without its failings and challenges, musical and otherwise. Before the concert began, the sound system was beset with difficulties which resulted in a late start to the show. Further sound problems bedeviled Peacock’s playing in the second half of the program, and that disruption seemed to rattle him badly. In fact, after being forced to stop midway through a tune because of untenable distortion, his intonation and time suffered for the rest of the concert. It was shocking to me as a working musician to see how delicate and brittle he seemed. Technical problems are just part of the landscape for any musician, and not being able to overcome them is inexcusable.

Another bizarre feature of the concert was Peacock’s complete lack of verbal communication with the audience. Although most players announce their pieces from the stage, the Peacock Trio did not and chose to keep the audience in the dark. I recognized a few tunes in each set, but the rest of their offerings tumbled out in complete anonymity. I cannot fathom what end this lack of engagement served.

Peacock does have a reputation for fussiness. He is notoriously picky with his personnel choices and, apparently, where he chooses to play. That is his right. He gets to be picky after a stellar, nearly sixty year career. Nonetheless, his silence in greeting the audience, perhaps sharing a few words or expressing in any way his own pleasure at being on stage, was annoying. Clearly, he has made certain decisions about “Entertainment vs. Art,” but would it kill him to smile or even talk a little? Even the great Miles Davis, with his undeserved reputation for disdain, showed appreciation and some warmth to his public. It would have been nice to know that Peacock appreciated the opportunity to present his music to an engaged, sympathetic, educated and interested audience while performing in a first class hall under relatively comfortable circumstances.