Not only has the Kalichstein-Laredo-Robinson Trio managed to stay together as a performing piano trio for 40 years, but from their SummerFest performance Sunday (August 13), it is clear they have lost neither the brilliance nor acuity upon which their estimable reputation rests. To a very traditional program of Mendelssohn and Brahms they brought that unfailing ensemble unity that comes from extensive living with repertory as well as their vividly communicated insights on what makes a piece of music work. 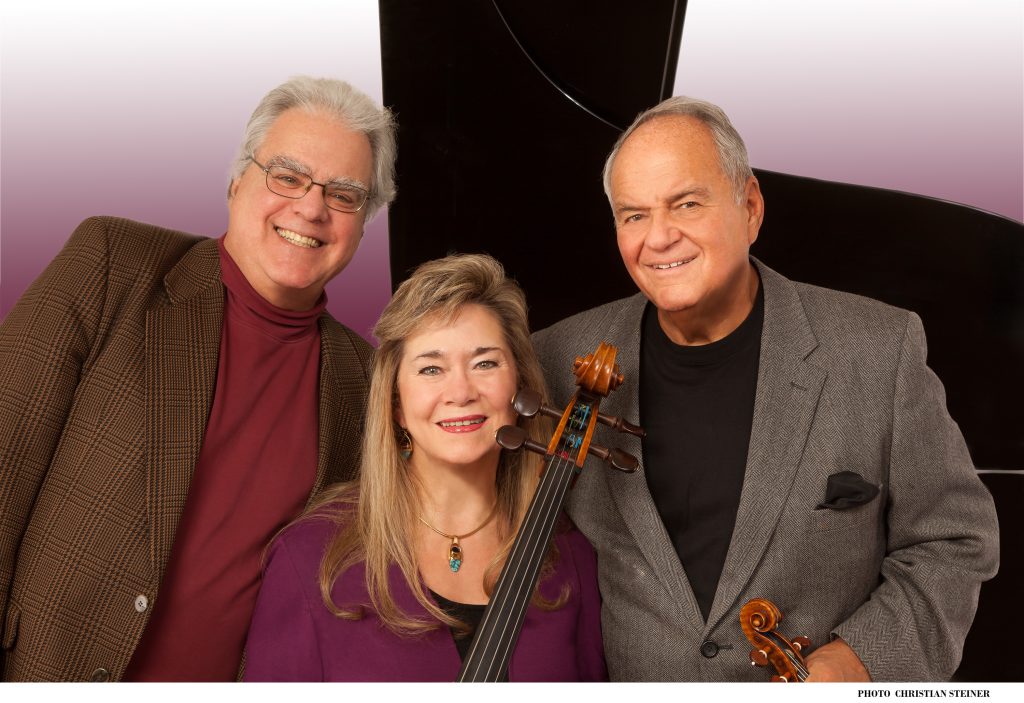 Take their account of the Scherzo from Johannes Brahms’ B Major Piano Trio, Op. 8, for example. The Trio gave a captivating sparkle to the fleet, feathery Mendelssohnian motifs that opened the movement, and, as Brahms expanded and darkened the texture with his signature muscular approach, the Trio eased into the new vocabulary with the finesse of an ocean liner pulling into its berth.

Pianist Joseph Kalichstein and cellist Sharon Robinson imbued the expansive main theme of the Brahms Trio’s opening movement with an opulent, noble cantabile, to which violinist Jaime Laredo added his more slender, piquant timbre and elegant legato line. These veteran performers easily subdued the challenge of maintaining that delicate balance between the composer’s exuberant ideas and the clear formal structure in which he set them.

In the Adagio, Kalichstein evoked a transcendent solemnity deftly tracing its dark, widely-spaced chordal progressions, another signature trait that would mark Brahms’ solo piano music, such as the haunting “Edward” Ballade in his Op. 10 set. Robinson conveyed a parallel gravitas as she unveiled the movement’s autumnal second theme, an improvement the composer bestowed on the work when he revised this early composition a few years before his death.

While there is something surefire about the summary quality of Brahms’ ebullient final movements, this Trio’s consummate authority made their account of the finale exceptionally invigorating.

The Trio lavished equal deliberation and artistry on Felix Mendelssohn’s C Minor Piano Trio, Op. 66. I am always slightly disappointed with this Mendelssohn Piano Trio because although it is a paragon of pleasing thematic invention and structural design, it lacks the dramatic power of his earlier D Minor Piano Trio, Op. 49. In the final movement of the C Minor Piano Trio, however, the composer quotes and embellishes upon the ubiquitous Protestant hymn tune “Old Hundredth,” which brings a chuckle to this organist who played it every Sunday morning for over 40 years. And for the record, Mendelssohn was one of the leading organists of his day, so I always take the “Old Hundredth” quote as an inside joke!

The Trio opened their program with “Pas de Trois,” a new piece by American composer Ellen Taaffe Zwilich. Kalichstein explaned in his impromptu introduction to the work that Zwilich intended her 15-minute composition to be “an appetizer,” and to the extent that it was pleasing and not terribly filling, it was a success. Although Zwilich’s printed program note and Kalichstein’s comments each explained the logical structural plan of “Pas de Trois,” on a single hearing I found her collection of agitated motifs did not cohere into the prescribed package. Her flinty modernist style suggested the humor of Kabalevsky and occasional intimations of angular jazz riffs, but for all the music’s suggested motion, stasis ruled the day. The La Jolla Music Society was one of the several organizations that commissioned “Pas de Trois.”

For an encore, the players chose a charming piano trio arrangement of George Gershwin’s “Summertime” from Porgy and Bess.

This concert sponsored by the La Jolla Music Society’s SummerFest was given on Sunday, August 13, 2017 in UC San Diego’s Conrad Prebys Concert Hall. The festival continues through Friday, August 25, 2017.