In a riveting concert Saturday (April 8) at St. Andrews by the Sea Episcopal Church in Pacific Beach, Patrick Walders’ San Diego Pro Arte Voices threw down the gauntlet to other choral organizations in San Diego’s flourishing choral scene. It is not enough to assemble a crew of eager young voices—you must conquer the most formidable repertory programmed in a way that captures both the allure and challenge of these works. 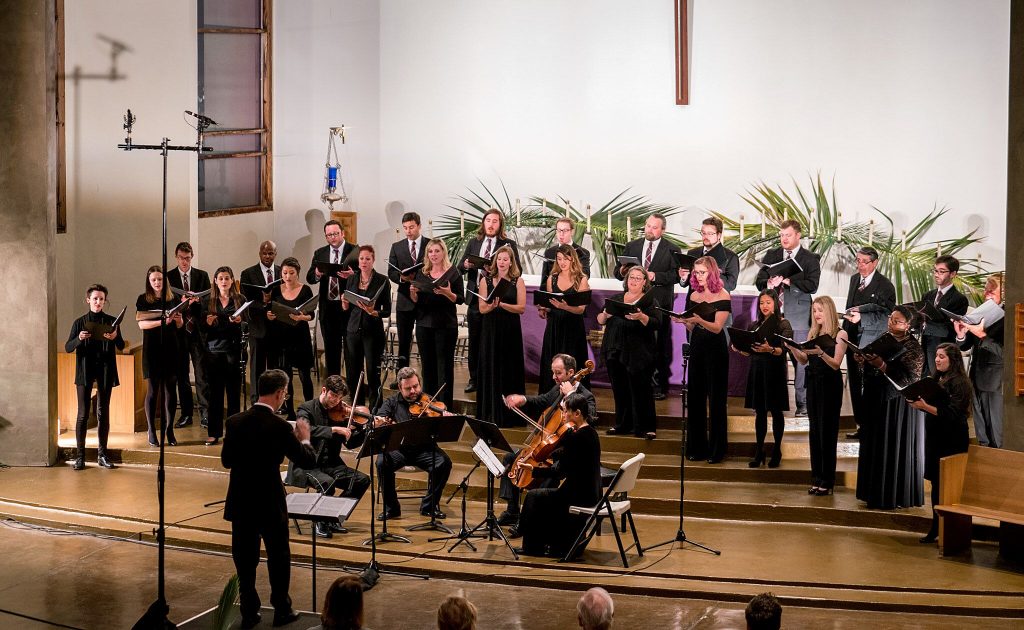 Walders accomplished this feat with his Missa Mixta, a daunting pastiche of seven sections of the Latin Mass, each written by a different composer from widely contrasting musical epochs. His gamut ran from the late medieval French composer Guillaume de Machaut to the contemporary Austrian Manfred Länger. Not only did the 27-member Pro Arte Voices successfully navigate seven centuries of contrasting vocal and choral styles with panache and complete assurance; they managed to transmute the energy and direction of each movement into the succeeding Mass section.

Opening with the Kyrie from Palestrina’s Missa Papae Marcelli, one of the crown jewels of High Renaissance polyphony, 11 of the Pro Arte singers sustained its undulating, sinuous counterpoint with a rich, velvet texture and acute discipline within each section of the choir. The pulsing drive of Palestrina’s final Kyrie section beautifully set up Länger’s Gloria from his Missa deus est caritas, written in a sparkling contemporary tonal idiom that jubilantly bounced through the Gloria’s moods, allowing the full choir to flex its muscles and its high sopranos to flaunt their brilliance.

I enjoyed the irony of choosing Ralph Vaughan Williams’ Credo setting from his Mass in G Minor, an agnostic’s sensitive setting of Nicene Christian orthodoxy. Although the reverberant acoustics of the St. Andrews’ sanctuary usually flatter choral singing, in the case of Vaughan Williams’ complex Credo set for double choir, the words were difficult to make out, save the grand fugal “Amen” at the Credo’s climax, a tumult of praise powered by the Pro Arte Voices exultant singing.

Walders drew out the slowly unfolding majesty of Josef Rheinberger’s lush, late Romantic Sanctus from his Mass in E-flat Major, although in this work the choir’s bright soprano timbre may have been too much of a good thing. An infectious rhythmic ostinato throughout Frank Martin’s lively Benedictus from his Mass for Double Choir proved the perfect chaser for Rheinberger’s pious solemnity, and Igor Stravinsky’s Pater Noster (a text Protestants know as “The Lord’s Prayer”) evoked the mystery of Russian Orthodox chant in the composer’s own densely-voiced modal salute to the lingua franca of Eastern Christianity.

Guillaume de Machaut, as rebellious a composer in his era as Stravinsky was in the early 20th century, created one of the earliest complete polyphonic mass settings in his Messe di Nôtre Dame, from which Walders chose the Agnus Dei to complete his own Missa Mixta. Four soloists from the choir captured the remote yet somehow timeless character of this music with its profuse ornamentation and glacial harmonic movement, a style much closer to the current Minimalism of, say, Morten Lauridsen than any of the composers from the centuries in between.

Although the full set of Vaughan Williams’ “Three Shakespeare Songs” is not that frequently programmed, the Bard’s secular poetry made a fitting contrast to the Missa Mixta. The Pro Arte Voices brought out the haunting harmonic echoes of “Full Fathom Five” from The Tempest and rendered the deep, organ-like chords of “The Cloud-capp’d Towers” with awe-inspiring majesty.

In collusion with his publisher, American composer Samuel Barber put words of the Agnus Dei to his most famous composition—“Adagio for Strings”—a feat that could not escape a certain commercial taint. Any volunteer choir that has attempted to sing this version of Barber’s signature instrumental work has been daunted by the long, long lines that strings so easily accomplish, but singers, who need to breathe every now and then, find distressing. Pro Arte Voices, however, sustained these endless phrases with gentle assurance and consistently deft phrasing that rendered Barber’s tremulous cadences with ravishing results.

Walders invited the Hausmann Quartet, the resident string quartet at San Diego State University, where Walders is Director of the Choral Studies Program, to share his program. They contributed a serene and at times transcendent account of the Molto Adagio from Beethoven’s A Minor String Quartet, Op. 132, and a sharply defined “Arcadiana,” Op.12, by Thomas Adès, a four-movement suite for string quartet whose vibrant, post-Minimal style defines contemporary British composition in a way that Vaughan Williams did for his countrymen a century ago.

For an encore, the two groups joined forces in an arrangement of the closing movement (sung in German) of J. S. Bach’s Cantata No. 147, a piece known by English-speaking audiences as “Jesu, Joy of Man’s Desiring.”

[themify_box style=”shadow” ]San Diego Pro Arte Voices presented this concert at St. Andrews by the Sea Episcopal Church in Pacific Beach on Saturday, April 8. The organization’s next performance, “Disarm Hate,” will be given in the same venue on Memorial Day, May 29, 2017.[/themify_box]