To be certain, combining two symphony orchestras in concert on the Copley Symphony Hall stage Wednesday, October 24, was no small feat. And, yes, it has been done before: in January 2014, Pinchas Zukerman conducted the Royal Philharmonic Orchestra and the San Diego Symphony together in Tchaikovsky’s Fifth Symphony. 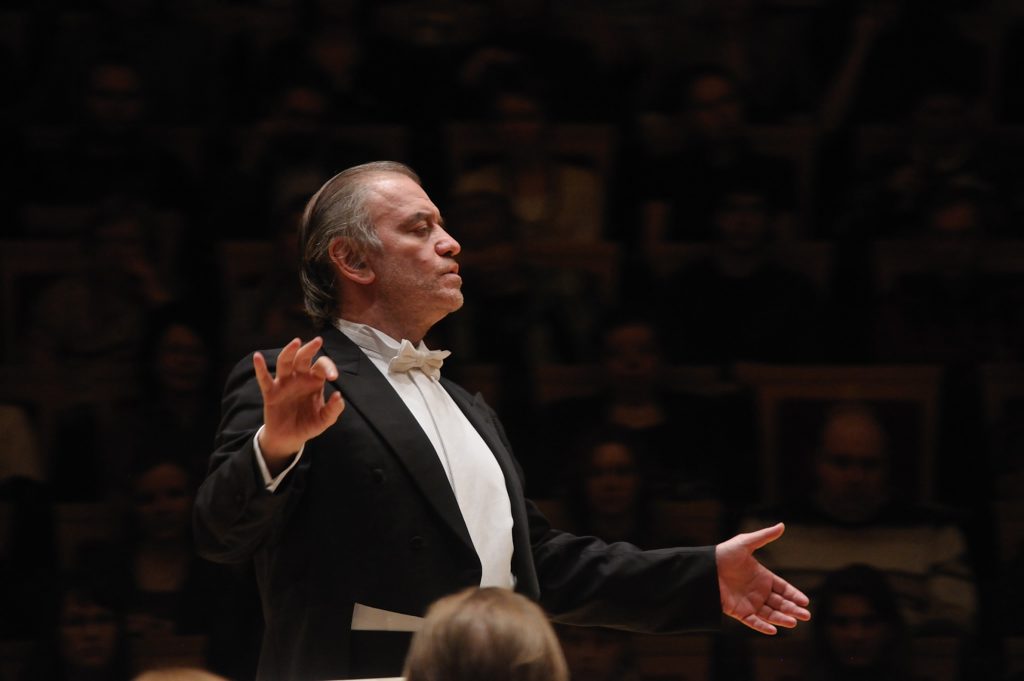 Over the years, Shostakovich’s Seventh Symphony has been trashed by the gamut of observers, from famous composers such as Béla Bartók to workaday music critics. Although it was wildly received in the early years of World War II as a testament to the valiant resistance of the Red Army and the brave people of Leningrad under the Nazi siege of that city—the story of smuggling that microfilm of the symphony’s score from behind enemy lines so that the Allies could perform it in England and the United States is indeed worthy of a motion picture adventure film—after the war, the Seventh Symphony fell out of favor.

This boom and bust trajectory is paralleled in a more recent musical phenomenon, the reception of the late Polish composer Henryk Górecki’s Third Symphony (“Symphony of Sorrowful Songs”) in the early 1990s. At that time, a recording of this work featuring the American soprano Dawn Upshaw broke all sales records for a classical recording, and orchestras everywhere were suddenly programming it. When that tsunami of popularity subsided, however, Górecki and his Third Symphony fell back into the obscurity it enjoyed when it was first recorded in 1978 on a tiny Polish record label. And over the last 20 years, this symphony has simply disappeared from orchestra programs in North America.

Gergiev’s commanding direction of the Seventh Symphony certainly left no doubt of his high estimation of Shostakovich’s work, and the sumptuous, sublimely detailed performance by the combined orchestras made an irresistible case for its respectable place in the symphonic canon. I was immediately impressed by the sonic breadth of this combined orchestra, which occupied every square inch of Copley Symphony Hall’s stage. The slightly dark, burnished character of the strings—notably the violins—was clearly the welcome gift of the Mariinsky Orchestra, although the elegant contributions by the virtuoso first chair woodwind players from the San Diego Symphony matched that gift nicely. And the legions of resonant, polished Mariinsky brass—I exaggerate slightly their actual number here—proved positively heaven storming.

Gergiev luxuriated in Shostakovich’s expansive first movement for a mere three minutes under half an hour, a time span into which many a complete Haydn symphony fits with minutes left over. For the multitude of this movement’s delicately traced solos, he maintained immaculately translucent textures, and he built up the full orchestra climaxes with unimpeachable assurance. To his lyrically animated account of the second movement scherzo, the conductor contrasted the ensuing Adagio with its glowing chorale by the winds and mysterious soft cello murmurings. An edgy, insistent march interrupts this tranquility, but when it finally passes through, Gergiev deftly restored the peace of the opening chorale just in time to launch into the climactic finale.

No doubt Stalin would have desired a final movement full of glorious triumphant fanfares to rival those of Tchaikovsky’s “1812 Overture,” but Shostakovich projected a more nuanced worldview. Having scrapped his initial title “Victory” for his last movement, he constructed a more equivocal tableau of struggle that will not be vanquished, which Gergiev illuminated with ardent patience.

Gergiev opened his program with three short, amicable preludes. With assistance from six vocally powerful, well-trained singers from the Atkins Young Artist Program at the Mariinsky, Gergiev and the Mariinsky Orchestra offered a stirring musical toast to his hosts, the “Brindisi” from Verdi’s opera La traviata. Gergiev followed with an exceptionally brisk but well-pointed Overture to Russlan and Ludmilla by Glinka. This outing admirably displayed Mariinsky’s fleet and agile first violins, and the brass sections complemented their virtuosity with bold, tightly focused pillars of sound.

This concert was presented by the San Diego Symphony on Wednesday, October 24, 2018, in the Jacobs Music Center’s Copley Symphony Hall.