The sight of eight professional musicians, actually festival orchestra members from the wind and percussion sections who were not called for in the score, tootling on some silly instruments while their colleagues played in their customary serious fashion proved as entertaining as the music itself. 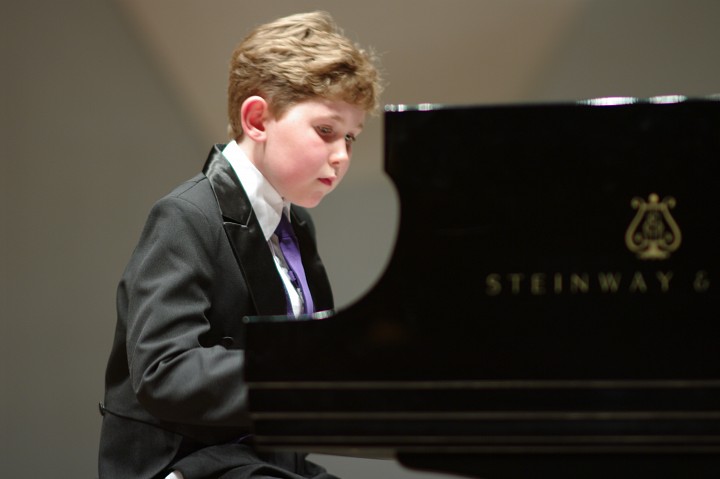 Once this amusing bauble was dispensed, however, Mainly Mozart Music Director Michael Francis returned to his Atkins Diet regimen of music composed by the teen-aged Mozart, complemented on this program by music from teen-aged Felix Mendelssohn. I think it is fair to generalize that the Mozart scores performed this season have revealed a great talent still learning the craft of symphony and concerto composition: a plethora of lively and infectious themes stitched together but rarely explored, and sadly underdeveloped musical structures. For example, two modest early Mozart Symphonies, No. 5 in B-flat, K. 22, and No. 52, K. 102/213c (don’t let the high number mislead you), barely came into focus before they rushed to a final cadence, leaving little evidence of their presence. Francis titled this program on his Prodigy Year series “The Master Prodigy,” but neither of these two early Mozart Symphonies evidenced much mastery.

While George’s technical facility at the piano keyboard provoked genuine amazement, he showed little variety of touch or phrasing in his sadly monochromatic interpretation of the concerto, and his tone consistently lacked the energy and strength to match that of the festival orchestra. Last fall George played a solo recital for Mainly Mozart’s Mozart and the Mind series in La Jolla, and I noted a similar problem with his Beethoven and Rachmaninoff: all the notes of the score were carefully performed, but he left the audience wondering what these works were about. This is the downside of prodigy: the very young lack the life experience to flesh out the meaning of the music they so skillfully reproduce.

For his encore, George gave a spirited but less than precise account of Rachmaninoff’s Prelude in G Minor, Op. 23, No. 5.

Mendelssohn’s Symphony No. 1 in C Minor, Op. 11, reveals the 15-year-old composer’s ability to flaunt his keen dramatic sense in vivid orchestral colors. Of course, it certainly proved helpful that the composer’s wealthy father was able to hire an orchestra to drop by the family manse from time to time to give young Felix’s compositions a test run. With this traditionally designed four movement Symphony, the festival orchestra players at last had something on the program to test their mettle, and they proved more than capable of meeting every challenge. In the Andante, for example, the woodwinds’ ample mellifluous solos charmed us, as did Principal Clarinet Boris Allakhverdyan’s sweet arioso accompanied by delicate pizzicato strings in the final movement. That movement’s homage-to-Bach fugues gave the strings an opportunity to flex their muscles with élan.

Francis shaped the Menuetto and Trio adroitly, although young Mendelssohn had not yet learned how to shift gears smoothly between widely contrasting tempos and moods. It was difficult to make logical sense of the structure of the mercurial last movement, but the composer was clever enough to close with an impassioned two-minute flash of fireworks that guaranteed an enthusiastic audience response.

I hope maestro Francis will reconsider his current plan of crawling chronologically through the Mozart catalogue over the next five seasons. There is a plethora of mediocre work between these wan teen-age experiments and the sophisticated fare he wrote in his mature, productive years in Vienna, and I cannot see the virtue of plodding through even the best this middling repertory.