Although the music of Antonín Dvořák assumed center stage Saturday (January 9) at Mainly Mozart’s Spotlight Series presentation at the Auditorium of The Scripps Research Institute, clearly the stars of the show were the five brilliant and dedicated musicians who performed and were directed by the brilliant and beautiful Anne-Marie McDermott. 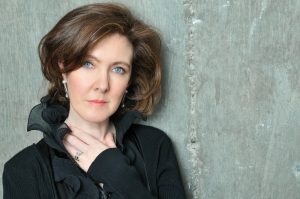 Their program consisted of the relatively rarely heard Terzetto in C Major for Two Violins and Viola, Op. 74 and the oft-encountered Quintet in A Major, Op. 81 (B.155). Both pieces were performed with a stunning, yet understated virtuosity by musicians who sounded as if they play together full time as members of a permanent ensemble. In fact, they all flew in from the four corners of the country to present this program, although no listener would have been able to tell from their performance.
The four movement Terzetto was composed for pure amateurish joy. Its composition was elicited in 1887 by the presence of a young renter in the Dvořák household who was a chemistry student. Dvořák, feeling it would be great fun to write a piece of  Hausmusik for the young student and his violin teacher,  assigned himself  the role of violist, a position he had held in several professional orchestras in his youth. Apparently, the well-intended composer missed the mark, writing a piece that exceeded the young man’s technical abilities.
Thankfully, technique was not an issue on Saturday evening. The virtuoso trio of Amy Schwartz Moretti, first violin, Geoff Nuttal, second violin, and Roberto Diaz, viola, positively oozed mastery and musicianship. Under their care, this piece, often dismissed as an inconsequential little ditty, assumed the stature of a masterpiece, although it is not one. The trio’s musical articulation brought out Dvořák’s own superb command of form and melodic development. This charming piece effectively set the audience up for what would be the ‘pièce de résistance’ of the evening.
I have a confession to make. I ‘like’ Dvořák, for the most part, but I don’t ‘love’ him. Having said that, I freely and contradictorily admit that his Piano Quintet is one of my all-time favorite pieces. I also have to admit that the piece was one of my childhood loves as performed and recorded by Rubinstein and the Guarneri String Quartet. Frankly, I was a little bit worried that whatever these fine musicians presented on Saturday night would fall pathetically short of my Proustian recollection. For the most part, I was wrong, although in some ways I nailed it.
I have to say that from the outset of the opening movement, I was stunned by McDermott’s piano playing. She transcended the traditional accompanying role and presented a truly virtuosic display without ever impinging upon the collective presentation required in all chamber music. Her tone is broad, and yet she brings a unique clarity to the chord voicings. Her obvious mastery of all of the details of the entire score allows her to support, cajole, make commentary upon and generally articulate every aspect of the performance without imposing upon the other musicians’ creativity or interpretative powers. McDermott’s artistry follows directly in the lineage of Menachem Pressler, the brilliant, long time member of the celebrated Beaux Arts Trio.
Nuttall, who traded chairs with Moretti for the Quintet, proved an exciting and sensitive leader. Wearing one of the most remarkably beautiful tuxedos I’ve personally ever seen (let’s just say it was a dusty rose of the most contemporary and stylish cut), he was assiduous in not allowing virtuoso flash to minimize the chamber music quality of the piece.
If I had one little thing to nitpick, it would be the choice of instrument made by Christopher Costanza, the able and virtuoso cellist. The instrument he played is part of Stanford University’s Harry R. Lange Instrument Collection. To my ears, this early 18th century Italian cello produced a warm but uncentered sound. Its timbre, sometimes called “woofy” by musicians, was not to my taste in this context, especially in view of the choice to use a bright sounding nine foot Yamaha piano. A more centered and compact sound would have created a better blend, although this takes nothing away from Mr. Costanza’s superb playing.
I commend McDermott one other thing.  In her role as the Spotlight Series’ Curator, she brings extraordinary but, in many cases, less well-known colleagues. For this concert, she struck gold. The next program on the series will be a joint concert featuring the Szymanowski Quartet and the Attacca Quartet scheduled for February 27-28.