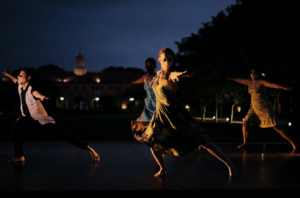 I’m excited to go anywhere these days, but a live dance show! My first in more than a year! In fact, it’s a festival—four weekends of performances by the resident companies at Dance Place! Declarations of “I’m vaccinated” were followed by hugs! I may end every sentence with an exclamation point!

Of course, this is not “back to normal.” The setting is an outdoor stage at Liberty Station—the festival is titled “Dance is in the Air.” The audience is masked and distanced. So are the dancers. And we’re longing for closer connection, a wish conveyed poignantly in dances by Terry Wilson. 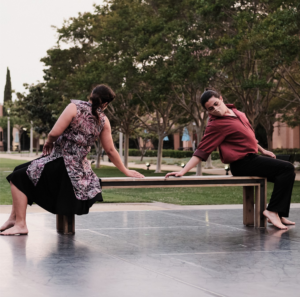 Wilson is the new artistic director of San Diego Dance Theater, which opened the festival last weekend. An artist of heart and depth, Wilson seems incapable of making a trivial dance. Even her fun, flirty “Lovers in Love” has substance. To 60s pop tunes, six dancers (the four women in summery party dresses) do exuberant kicks and pony prances, even jumping to match the lyrics on “Ain’t no mountain high enough.” It’s playful and light yet suffused with a yearning to touch!

The desire for physical connection is made visible in Wilson’s “Words Move,” a suite of four dances, each one introduced by a recorded reading of a poem. In a section that opens with a stanza from David Adès’s “A Line in the Sand,” Brianna Bellamy and Mario Jaimes sit at either end of a bench, facing away from each other, then reach an arm back … back … back and almost touch. 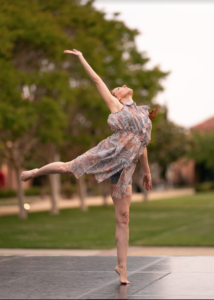 Cecily Holcombe extends her gorgeous long limbs in deep lunges and expansive balances in a piece introduced by Neruda’s “If You Forget Me.” Dancing solo, she’s unmasked, and her face is anguished.

Wilson exquisitely curated the wistful poetry and moody classical music (often, as I recall, featuring cello). As a whole, the set of four brief dances felt like it has yet to find an ending. Maybe that will only happen when we can remove our masks.

The program, titled “Other Times, Other Places,” also included work by Jean Isaacs, who recently retired as the head of San Diego Dance Theater, Khamla Somphanh, and Rosanna Tavarez.

Isaacs’ intense “Phantom Limbs, Revisited” features text by UCSD Theater professor James Winker about friends lost to AIDS—spoken by Marcos Duran, as Liv Isaacs-Nollet hovers at his side. Dressed in a pale camisole and tap pants, Isaacs-Nollet might be a spirit, invisible to Duran, even as they engage in increasingly deft partnering: she perches on his shoulder, balances upside-down across his lap. Ironically, because both of these dancers are vaccinated, they can be in physical contact; but, until a tussle near the end, Duran seems unaware of Isaacs-Nollet’s presence. 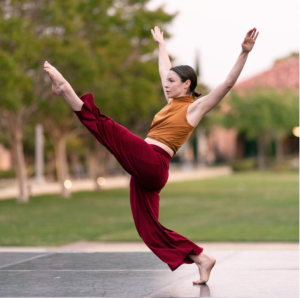 Lauren Christie is riveting in Somphanh’s “Purposely Accidental,” a powerful solo in which a voice recording—of President Barack Obama—reveals that during the Vietnam War era, bombs fell on Laos “like rain.” Dressed in deep red and gold, Christie moves initially with the precise alignment of a temple dancer. Gradually the precision gives way, and she throws herself around the stage, sweeping her arms over the floor as if searching for land mines.

Solo tango sounds like an oxymoron—tango is all about dangerously entwining limbs and smoldering relationships—and in Tavarez’s solo, “Milonga Mia,” she sometimes dances as if holding an imaginary partner. She also tosses her hair a lot. As she states in the program notes, there’s no substitute for “the joy and tactile exchange elicited by dancing in partnership.” This piece seems to prove it. But it was the one disappointment on a program that took me to my happy place!

Coming up in the “Dance is in the Air” festival: