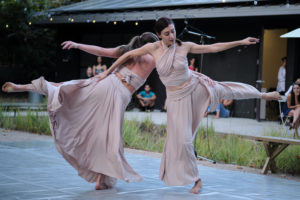 Ashley Ashkvakan and Erica Ruse in “Bridge to There.” Photo: Jim Carmody

Over the past few months, dance has begun to emerge from the confines of the computer screen into the great outdoors. Dance Place’s resident companies did a four-week series at Liberty Station in June. Liberty Station also hosted a La Jolla Playhouse WOW show that was heavy on physical theater. While it’s been thrilling to go to live performance, much of what I’ve seen had a sense of compromise—some of the work slapped together, some events noticeably short on stagecraft, and the avoidance of too-close contact awkwardly evident at times.

Happily, nothing felt second-best about Litvak Dance’s performance on August 28. Sadie Weinberg, who launched this North County company just three years ago, is a powerhouse networker. She recruited two guest choreographers to create work for the company: New York-based Rebecca Margolick, one of Dance Magazine’s “25 to Watch” this year; and Texas-based Joshua Manculich, who’s made dances for companies around the country. 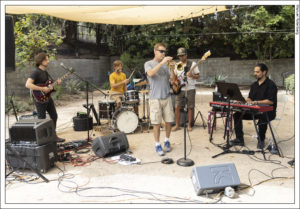 Weinberg also commissioned original music from top-notch collaborators, most of whom performed live. And she lined up an enchanting setting, the tree-lined courtyard of the Lux Art Institute in Encinitas. Even the weather cooperated, providing clear skies and gentle summer breezes.

A section from Manculich’s “Kisses, Walls, and Gestures,” which opened the program, showed three couples in increasingly intimate relationships. Ashley Akhavan and Guillermo Castro used gestures—and a park bench—to define space and set boundaries. There was a carefulness to their contact, even when he held her upside-down. 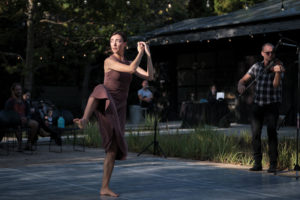 Things heated up with the second couple, whose exuberant partnering began with Maria José Castillo leaping into Nick McGhee’s arms. Next Beverly Johnson and Jordan Daley literally got down, rolling and scrambling on the floor. All six came into a brief final scrum, then turned to look at the band—the swell Montalban Quintet, a North County group whose genre-defying style has been described as jazz, post-rock, and cinematic. 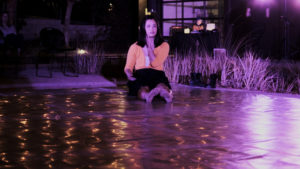 Margolick’s “Taoide,” was a deliciously tense solo for dancer Erica Ruse. To a wistful Irish fiddle tune played by Pete Polansky, Ruse seemed to wrestle with an internal dilemma—taking a step forward but quickly retreating, tapping her foot like a horse pawing the ground. Her gorgeous, expressive hands reached as if in wide-fingered awe or fluttered, agitated, behind her back.

The other four dances on the program were choreographed by Litvak members April Tra, Emily Miller (who did two pieces), and Ashkavan.

In Tra’s heart-in-the-throat solo, “Ever,” which she performed, she began seated, with slow, pensive movements. Tentatively, as if trying out her legs after an injury, she came to standing; did a stooped walk. Then she exploded in convulsive shudders, her isolations so sharp and focus so intense, it felt as if she embodied the collective tension of the past year-and-a-half. Violinist Kristopher Apple composed and played the music, heard in recording. 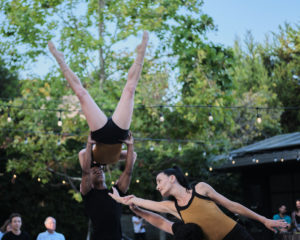 Miller created “Anatomy” for four members of the Ballet Collective SD, a group of local professional ballet dancers. To a piece by the Montalban Quintet, two couples (Reka Gyulai with Murillo Barbosa, Angela Rebelo with Tylor Bradshaw) displayed slithery legs, killer balances, and dramatic overhead lifts. Miller’s choreography here seemed mainly designed to show off the dancers’ anatomies, which were impressive. By the way, Bradshaw is a Tiktok star. 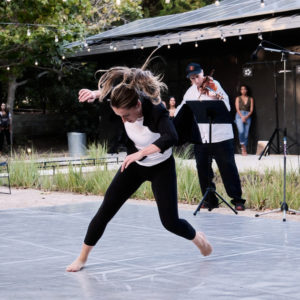 I found Miller’s “The Sysiphus and the Cúcala” more engaging, even though she was sidelined by an injury, so what was supposed to be duet instead became a solo for Ashkavan. Legendary klezmer artist Yale Strom composed and played a Balkan-sounding violin piece that seemed to drive Ashkavan into corkscrew turns to the floor and frantic changes of direction. Near the end, it felt as if she were pursued by a swarm of bees.

Ashkavan choreographed “Bridge to There,” a graceful duet she performed with Ruse, that featured long arms, swirling skirts, and lyrical music by Sean Walsh.

Weinberg’s stated vision for Litvak is to build a repertory from a range of choreographers, and she mentioned her delight that she’d created none of the pieces on this program. I understand her pride in showcasing strong work by guest artists and company members, but I hope to see some of her own complex work next time around.