Even if the classical music community were not observing Leonard Bernstein’s centennial year, Nina Bernstein Simmons’ program “Late Night with Leonard Bernstein” would have provided a well-spent evening. The late musician’s youngest daughter narrated an affectionate memoir of her father, expanded with performances of a cache of Bernstein’s shorter, earlier compositions and other music he loved performed on the Conrad Prebys Concert Hall stage by pianists John Musto and Michael Boriskin and soprano Amy Burton. 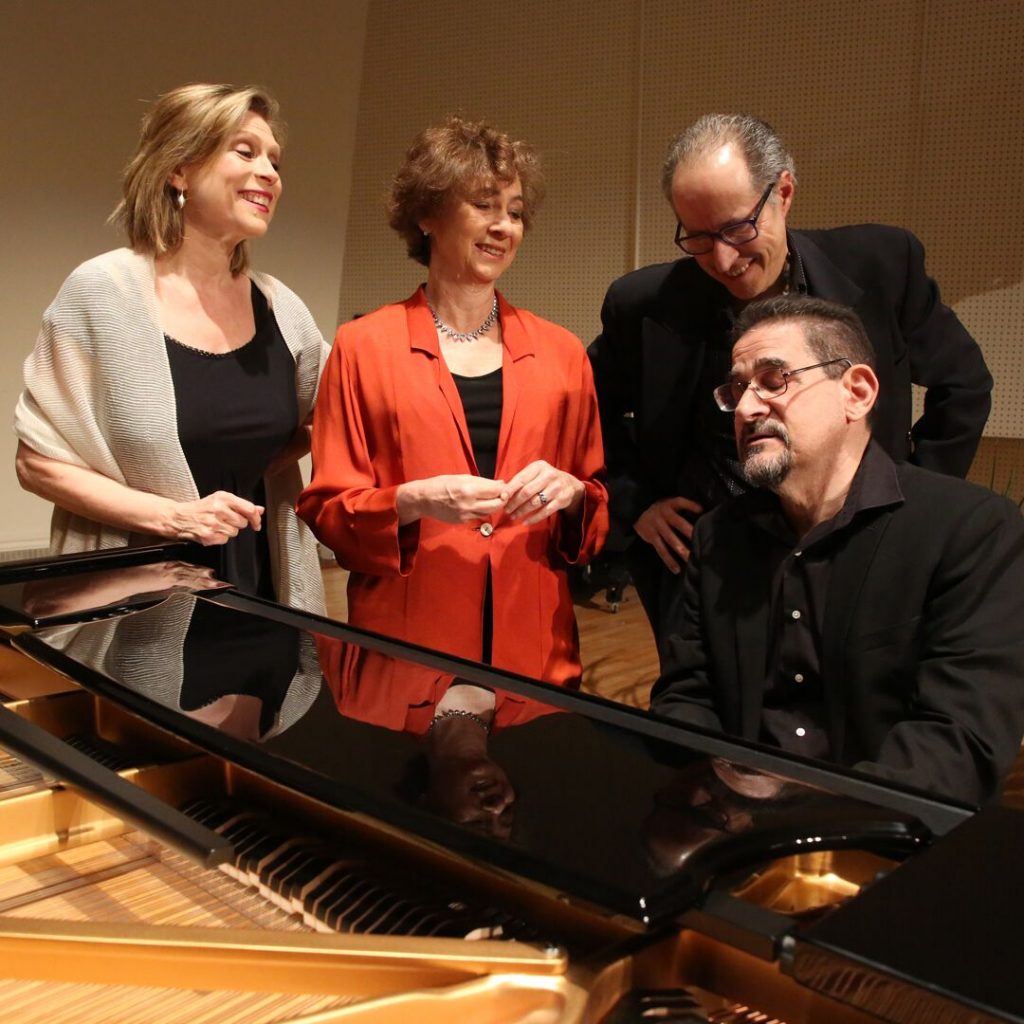 For the daughter, “late night” meant either Bernstein taking command of rollicking Manhattan parties, playing and improvising at the piano for a roomful of adoring guests into the wee hours of the morning or the solitary composer working late at his craft with no one to distract him. For those of us who know more than a little of the Bernstein biography, “late night with Leonard Bernstein” conjures other activities, although none of these crept into the narrative, even by oblique allusion.

We did learn, however, that more than a few of the themes found in his large successful works were recycled from his youthful piano etudes. The catchy, rhythmic “America” from West Side Story first appeared in his 1941 piece for two pianos “Conchtown,” written about Key West, Florida, where he vacationed with friends and fellow composers. And a mellifluous canon the young Bernstein wrote for his mentor Aaron Copland, aptly titled “Canon for Aaron,” reappeared in the final movement of his 1971 Mass, written in honor of John F. Kennedy.

We also heard some of the piano music the young Lennie liked to perform to impress friends, from Zez Confrey”s flashy “Dizzy Fingers” to a pair of variations from Aaron Copland’s daunting “Piano Variations.” John Musto gave a breathtaking account of Zez Confrey’s ravishing but quite empty runs up and down the keyboard. If perchance you have not encountered Confrey’s “Dizzy Fingers,” I suggest searching out Liberace’s YouTube video of this 1923 gem.

According to Lennie’s daughter, his impressive impromptu performance for Copland of the composer’s complex, virtuoso “Piano Variations” cemented their relationship, with Copland acting as mentor to Bernstein as he developed his composer’s chops. Michael Boriskin’s polished yet muscular realization of Copland’s astringent counterpoint and dissonant chordal progressions in the “Piano Variations” only whetted my appetite for a complete performance of this work on a future program on the La Jolla Music Society’s Piano Series.

Bernstein the tunesmith was not overlooked. Burton offered two songs from his 1944 collaboration with Betty Comden and Adolph Green, On the Town, the composer’s first Broadway success. “Ain’t Got No Tears Left,” a white lad’s overworked imitation of the blues ballads sung by Billie Holiday and Bessie Smith, and the nostalgia laden “Some Other Time.” I recall Burton’s vivid soprano from a San Diego Opera production of La cenerentola in the 1980s, and she has retained the gleam of her impressive upper register. I do wish she had worked harder at communicating the lyrics of these songs. The format of this presentation had the performers at the front of the stage sitting on a couch and a pair of overstuffed chairs to give the illusion that we were gathered in someone’s posh living room for a musical soiree. The pianists tore into their assignments, but Burton appeared too comfortable with her vocal contributions.

We also learned about Bernstein’s early career as an arranger: an excerpt from his piano reduction of Copland’s orchestral tone poem “El Salon Mexico,” given a sympathetic, finely detailed account by Boriskin, and Raymond Scott’s bustling “Powerhouse” arranged for two pianos. While Scott’s name may ring a bell only to serious jazz history buffs, Scott’s music gained its anonymous notoriety—especially his 1937 “Powerhouse”—as sound track material for cartoons. In the 1940s Scott sold his prolific catalogue of music to Warner Brothers, whose arrangers regularly ransacked it for their cartoons. When Bernstein arranged “Powerhouse” for the Harms Music Company, however, he used the pseudonym Lennie Amber.

Nina Bernstein Simmons proved a charming host, exhibiting that trademark Bernstein gift of disguising serious pedagogy in voluble conversation. And when all is said and done—she was there to observe the maestro firsthand. If only Carl Philipp Emanuel Bach had taken the time to jot down his recollections of life in his father’s household!