Upon the demise of William Wirt Winchester in 1881, his wife Sarah Winchester immediately became one of the world’s wealthiest women. With a sizable inheritance, a 50% interest in the New England Winchester rifle firm, and no children, Sarah had at her disposal more money than she could possibly spend in a single lifetime. 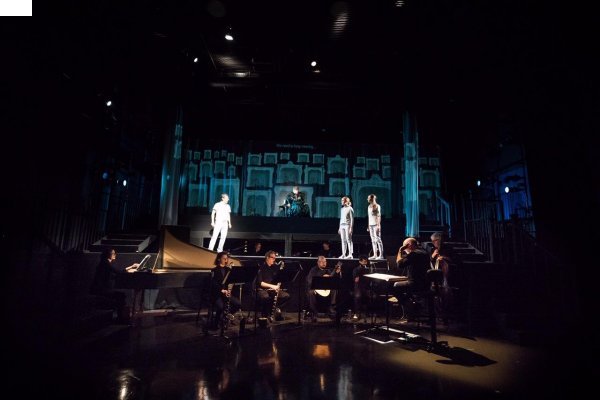 For reasons shrouded in mystery and fantasy, Sarah invested her time and fortune in the unceasing expansion of her San Jose mansion, known today as the Winchester Mystery House. San Diego composer Lei Liang has taken the eccentric heiress and her strange obsessions and turned them into a one-act chamber opera, aptly titled Inheritance, which received its premiere last week in the Experimental Theatre at UC San Diego’s Conrad Prebys Music Center.

Central to the Sarah Winchester legend is her contact with the spirit world, and even today her mansion’s claim to be haunted by the ghosts of persons slain by Winchester rifles accounts for much of its allure to the tourist trade. Liang has built his opera around the personage of Sarah, magisterially acted and beautifully sung by fellow UC San Diego music faculty member Susan Narucki. In decidedly secondary roles, sopranos Kirsten Ashley Wiest and Hilary Jean Young, both graduate students at the university, portrayed ghosts and household servants, while Mexican baritone Josué Cerón sang another ghost and a Mystery House tour guide.

But the opera revolves around Sarah and her obsession with death, notably the sudden death of her infant daughter—her only child—and the deaths caused by Winchester rifles, the conscience-troubling  source of her wealth and comfort. For his soprano main character, Liang crafted a subtle parlando that blooms only after Sarah cautiously reveals herself as the opera progresses, following Matt Donovan’s poetic libretto.

This vocal style suited Narucki admirably, allowing the more radiant, plush attributes of her gleaming soprano to shine. Usually I encounter Narucki performing with amazing agility some punishing, acrobatic avant-garde work that compromises the allure of her bel canto technique in order to navigate such thorny complexities. Not that Liang reverted to the Italianate vocal bravura of a Gian Carlo Menotti, of course, but the unhurried gentle curves of Liang’s lyrical style for the role of Sarah proved a gift to both singer and listener.

To the extent that Liang lavished his gifts on the role of Sarah, he used them far more sparingly for the other three characters, whose lines rarely exceeded utilitarian recitative. And occasionally, they were simply spoken rather than sung. If the composer expects a wider reception for this opera—at UC San Diego last week, the production was a decidedly in house affair—I suggest he take those roles back to the drawing board.

UC San Diego’s Experimental Theatre is little more than a black box with seating at one end, so production designer Ligia Bouton created a functional set constructed of steeply tiered platforms, with spaces defined neatly by gossamer curtains, stacked behind the chamber ensemble that performed immediately in front of the of audience. Narucki’s grand, midnight blue Victorian gown with an opulent collar of ostrich feathers perfectly defined her character’s social status at the end of the 19th century, although the opera’s other characters wore uniform contemporary street attire.

Liang’s Inheritance occupies a dramatic niche midway between Arnold Schoenberg’s slender monodrama Erwartung and Benjamin Britten’s two-act opera The Turn of the Screw. I hope the composer is in communication with Opera San Jose about this work—Inheritance is the perfect vehicle for the city that claims the Winchester Mystery House as its own.

Lei Liang’s opera was produced by UC San Diego’s Division of Arts and Humanities and ArtPower at the UC San Diego Music Department’s Conrad Prebys Experimental Theatre October 24, 26 & 27, 2018. The final performance was viewed for this review.