Maybe with string quartets such as Emerson, Calder, and Pacifica making such regular visits, local string players figure, “Why bother?”

We have two flutists to thank for the popular, well-attended chamber series that do engage local musicians. For the last five seasons, Demarre McGill, the former Principal Flute of the San Diego Symphony, and his partner violinist Kate Hatmaker have cornered the contemporary music niche with their Art of Élan series at the San Diego Museum of Art.

In 1994, Beth Ross Buckley founded Camarada, a collective of more than a dozen San Diego-based soloists that has championed a wide range of the chamber repertory from Baroque to jazz, and, just this week, she announced that Camarada would also be appearing in a new series at the Mingei Museum, right across the plaza from the SDMA. 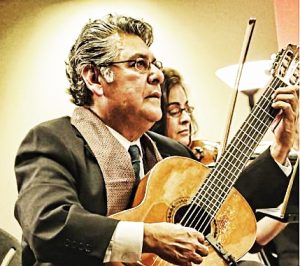 An accomplished string player—he is a violinist with the Atlanta Symphony—Ramirez displays a clear appreciation for the expressive potential of bowed and plucked strings, and at his best offered exciting, densely layered textures that brought to mind Bartók. There is, however, a distinctly retro ethos in his conservative harmonic idiom that recalls the 1930s, heyday of North and South American nationalism in music.

Cellist Erin Breene brought vivacity and point to her lively ostinatos in the opening “Postcard” dance, and violist Travis Maril persuasively sighed the tender cradle song that opened the middle movement, with Breene adding poignance when echoing the lullaby in the highest register of her instrument. I appreciated the clever string simulation of drumming in the first movement, although Ramirez’s  finale proved a more predictable whirlwind of jaunty themes in triple time. David Buckley provided the trio’s violin part.

The composer was present to introduce his work and accept the warm accolades of the audience at the completion of the piece.

At the midpoint of the last century, Brazilian Heitor Villa Lobos was at the top of his game, receiving abundant commissions from orchestras and celebrated performers such as guitarist Andrés Segovia. After Villa Lobos’ death in 1959, his star faded quickly, and those symphonies and concertos are rarely exhumed for performance. He is remembered primarily for a single piece, the haunting “Bachianas Brasileiras No. 5” for soprano and 8 cellos.

For this concert, Camarada selected three chamber works by Villa Lobos, including the late (1957) “Quintetto Instrumental” for flute, harp, and string trio. The Quintet’s lush harmonies, rhapsodic melodies, and its relentless—almost operatic—stream of climactic flourishes captured both the strength and fatal flaw of the composer.

Although his myriad passionate ideas unleashed with the force of a tropical storm, I kept wondering what he was trying to say beneath all of this fury and sound.

Camarada was unstinting in their rapturous account of the Quintet, from the billowing and deftly-shaped roulades of harpist Elena Mashkovtseva, to flutist Ross Buckley’s fluttering bird calls, to Breene’s elegiac cello swoons. The ensemble left no lily ungilded.

Opening this program was the sole non-Latin piece, Frenchman Gabriel Pierné’s “Voyage,” which called for the same instrumentation as the Villa Lobos “Quintetto.” As an organist, I suppose I should have more empathy for a musician who studied with César Franck and succeeded him on the organ bench at the storied Paris church of St. Clothilde. But I find Pierné’s late Romantic style decadent and his virtuoso rhetoric redolent of morceaux de concours, those difficult but vapid test pieces for the Paris Conservatory.