According to the La Jolla Playhouse’s Artistic Director, Christopher Ashley, Kimber Lee’s play, to the yellow house has been in the production process for nearly five years, taking different forms and being housed in different theatres as it went. It finally is making its world premiere in the Mandel Weiss Theatre, looking more like a Broadway house than I’ve ever seen it.  My assessment: worthy subject, worthy play, worthy production. Like most world premieres, it still needs work. 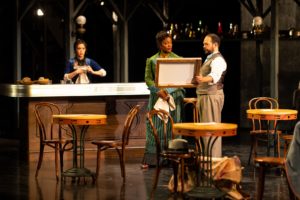 Let’s start with the worthy subject: Vincent Van Gogh. He was a prolific artist, creating over 2100 works, according to the Museum of Modern Art in New York City. He also died young, at age 37. His fame came posthumously, including a museum devoted to his work in Amsterdam, and, recently, a technologically immersive touring exhibit of his art.

to the yellow house focuses on the early part of his career, when Vincent (Paco Tolson) arrived in Paris. He sought out help from his brother, Theo (Frankie J. Alvarez), who was already established as an art dealer. Theo not only supported Vincent financially, but he also introduced him to other artists, including Gaugin (Marco Barricelli). Theo’s own career limited the help he could provide to his volatile, often angry brother, who, as the play tells it, struggled to survive in Paris, sometimes finding himself homeless, sometimes depending on the assistance of women who were assumed to be prostitutes (Deidrie Henry and Brooke Ishibashi).

Bucking the system, as personified by the teacher Jean-Léon Gérôme (Mr. Barricelli), Vincent organized a show with fellow students (Alton Alburo, DeLeon Dallas). Discouraged that all of his efforts were not attracting fame and fortune, Vincent decided at play’s end to rent a house in the suburbs. It would be there that he would be most productive – and also most destructive to himself. He would be followed in death six months later by Theo, whose own health had deteriorated.

But, the play ends, as the title predicts with the departure to the yellow rented house in the suburbs, which is not shown as part of the production. (I on the other hand, think it helps to see it). 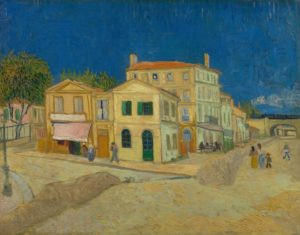 In fact, to the yellow house seems to be making a point about the frustration of bashing one’s head against walls in hopes that, despite the injuries, success will come. The audience knows that artistic success came to Vincent, so the struggle itself seems both ironic and sad. 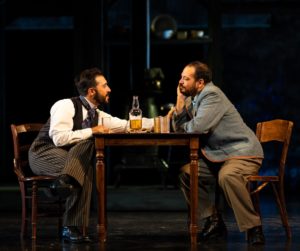 Director Neel Keller’s production is well-paced and full of moving parts and projections (scenic design by Takeshi Kata, projection design by Nicholas Hussong), which successfully create the mood but which never show finished art. There are several playing spaces, and Masha Tsimring’s lighting design is crucial both to showing and hiding those as needed. Palmer Hefferan’s sound design keeps clarity at the forefront. David Israel Reynoso’s costumes are both realistic and symbolically apt for the play.

Mr. Tolson has the monumental task of carrying a show of this length (nearly three hours, including intermission). I imagined that he was exhausted at the curtain call. Mr. Barricelli, an Oregon Shakespeare Festival stalwart for many years, now teaches at UC San Diego. He is, as ever, a reliable ensemble player, in this case, as the play’s antagonist. Ms. Henry radiates warmth as Agonstina, Vincent’s love interest, and Ms. Ishibashi does what she can with roles designed to irritate, both Vincent and the audience. Mr. Alburo and Mr. Dallas radiate youthful energy as the fellow students, and Mr. Alvarez makes Theo a realistic character, both loving and disciplining his brother as need arises.

It is the Vincent/Theo relationship where I think the play could improve. Despite being engaging, there’s not enough new information for the play’s length. Judicious trims, particularly where the play repeats itself, such as in interactions between Vincent and Theo, would help the commercial success it probably would not have in present form.

I’m glad that Christopher Ashley and the Playhouse was patient in mounting this work, however, and I think that audiences will find it fascinating despite its flaws.