The chance to hear all of Beethoven’s Piano Trios performed in a single day made Saturday, May 14, a red-letter day for chamber music aficionados. Thanks to the La Jolla Music Society, the top-drawer ensemble of pianist Wu Han, violinist Philip Setzer, and cellist David Finckel played the three Beethoven Piano Trios of his Opus 1 in the afternoon and the composer’s three later trios in the evening. 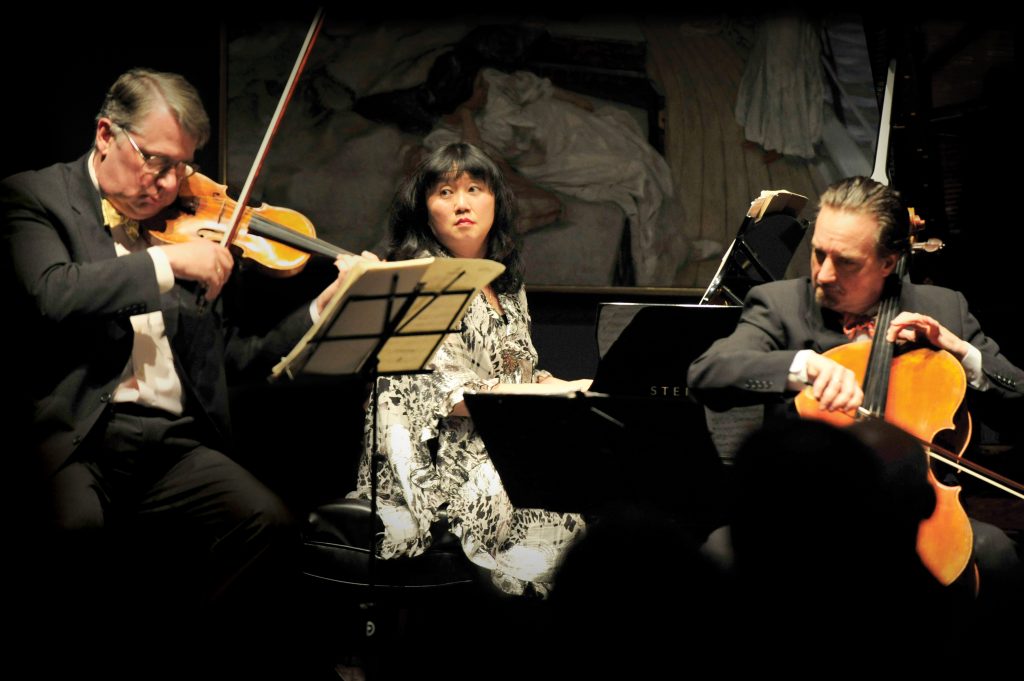 Beethoven settled in Vienna in 1792, and it did not take him long to discover how much the Viennese aristocracy loved the piano trio, a musical genre his teacher Joseph Haydn had elevated to a sophisticated but not terribly demanding musical level. Beethoven decided to make his first publication one that would impress his following, increase his patronage, and sell enough copies to make him a handsome profit. Published in 1795, his Opus 1 was far from his first actual composition, but it proved both a polished and profitable venture.

Of course, knowing how radically the mature Beethoven changed the musical idiom he inherited, these three Opus 1 Piano Trios strike us as formally rather prim, hewing carefully to the predictable architecture that Mozart and Haydn found useful. What was new, however, was the bold, complex piano idiom that blossomed in these trios.

Wu Han took commanding lead much of the time, especially in the fast movements, cleanly but vigorously unleashing the composer’s ebullient piano passages. Unfortunately, her colleagues retained a cooler, more Apollonian approach, which unbalanced their ensemble. Setzer and Finckel played together in the Emerson String Quartet for over 30 years, so it is no surprise that their timbres and phrasing complemented each other to such a high degree. Wu Han too frequently marched to her own drummer in those categories.

Some rewarding exceptions, when the three players achieved a more appealing balance: the two inner movements of the E-flat Major Piano Trio and the Andante cantabile of the C Minor Piano Trio, an endearing variation set these musicians played with luminous serenity. This movement featured Finckel’s lovely, elegantly calibrated cello solo, as did the Trio of Menuetto that followed it. Even when Setzer was given a promising solo theme, as in the opening movement of the C Minor Piano Trio, just as he began to bring out its shapely allure, the piano stole the theme away from him and took it in a dozen different directions.

Of these three Piano Trios, the C Minor stood out as the more profound, its dark, somewhat stormy ethos linking it to those other memorable Beethoven C Minor works, the “Pathétique” Sonata and final Piano Sonata, Op. 111, as well as the Fifth Symphony. At the conclusion of this concert of the Piano Trios of Opus 1, that classic phrase from Dr. Seuss came to mind, “Oh, the places you’ll go!”