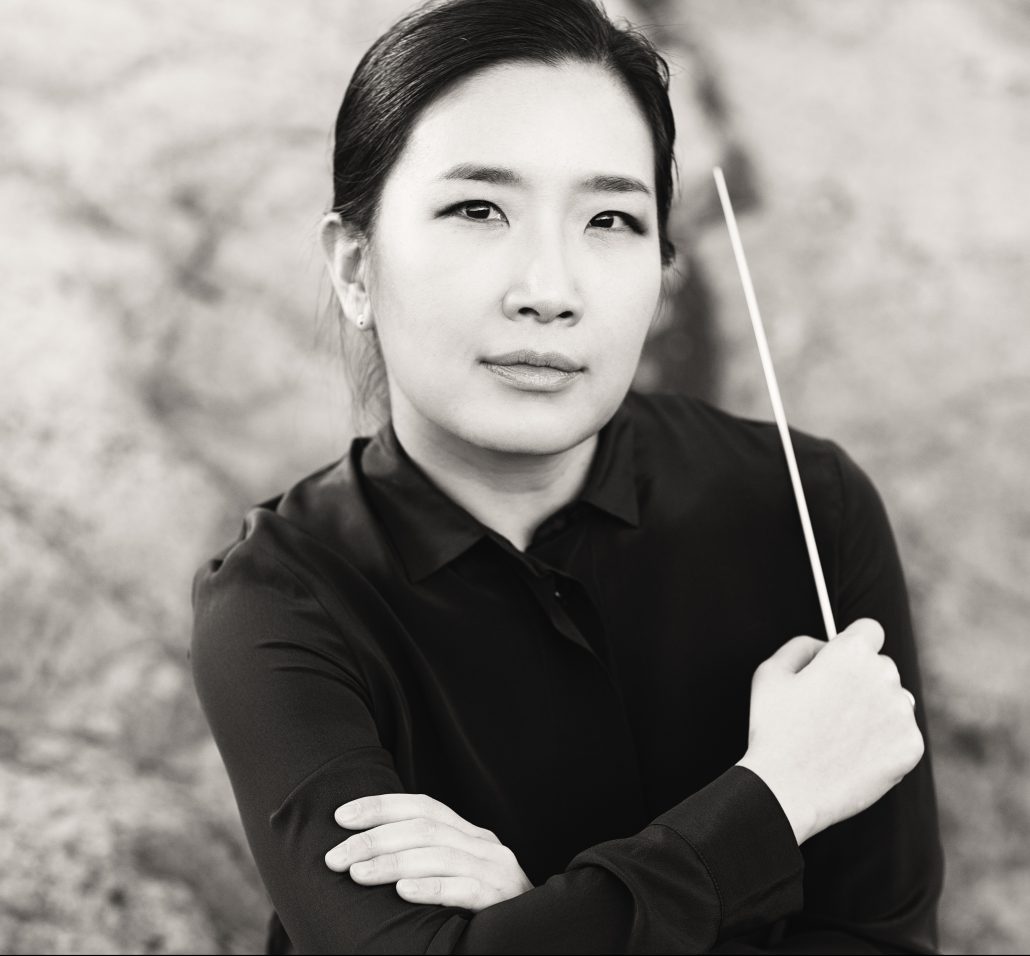 Some short, frothy concert-opening compositions function as mere throat clearing exercises, but Texu Kim’s “Spin-Flip” offered surprising scope in addition to its listener friendly theme. In his program notes and in a short presentation during the Symphony’s pre-concert lecture, Mr Kim explained that “spin serve” and “flip shot” are familiar ping-pong techniques, and that because his name sounds like the name of a legendary Korean table tennis player—Taek-soo Kim—the composer decided a musical composition was the apt retort to his fellow countrymen’s perpetual confusing him with the table tennis star.

A combination of unmistakable clicks and pops from the percussion section and whooshing sounds from the violins and flutes allowed “Spin-Flip” to easily conjure the sonics of a table tennis match. What proved far more engaging, however, was the work’s exuberant, colorful washes of sound from individual sections, as well as from the full orchestra, suggesting the high emotions and tension a competitive table tennis match might engender. I particularly enjoyed his punchy bass lines, snappy brass fanfares, and suave English Horn solos.

If the evaluation of the seven symphonies of Jean Sibelius has fluctuated over the last century, his Violin Concerto in D Minor became embedded in the standard repertory of concert violinists from its Berlin premiere in 1905 under the baton of Richard Strauss. When I was in the Bay Area in January, I heard the young Armenian violinist Sergey Khachatryan give a highly commendable performance of the Sibelius concerto with the San Francisco Symphony, and just a few seasons back, this orchestra presented Karen Goymo in the work that is frequently described as the most popular violin concerto of the 20th century.

For this performance of the Sibelius Violin Concerto, the young Chinese-American violinist Nancy Zhou took the solo role. At the concerto’s outset, I feared that Zhou’s slight, keenly focused sound would not be enough to compete with the full orchestra, but as the movement progressed, not only did her dynamics increase, but the scope of her sound blossomed. By the time she launched into the daunting complexities of the mid-movement cadenza, she displayed everything necessary to revel in its awesome power. Ms Kim encouraged a big, heroic sound from the orchestra, indeed welcome in the concerto’s most powerful statements. Yet more winning, subtle moments remain in memory, such as the shimmer of the hushed woodwinds at the opening of the slow middle movement. Ms Kim dared a breathless tempo for the closing movement, which allowed Zhou to display her technical prowess, immaculately defined phrasing and articulation that gracefully communicated the composer’s high spirits.

After Sergei Rachmaninoff left Russia in 1917 during the Revolution, he was never able to return to his native land, but in the few major compositions written after 1917, he always returned to the heady, late Romantic musical style that flourished in Russia in the last decades before the Revolution. Completed in 1936, his Symphony No. 3 in A Minor is a long, three-movement symphony abounding in shapely, arched themes, rich harmonic textures, and vivid emotional climaxes. I am tempted to say that if Tchaikovsky had lived long enough, this is the sort of score he would have written for Hollywood, although Rachmaninoff’s Third Symphony is more sophisticated than Erich Korngold’s movie scores of the 1930s.

Rachmaninoff’s opulent orchestration made the work extremely popular with the European conductors of America’s major orchestras in the mid-20th century. Afraid to expose their audiences to the atonal scores of Schoenberg and Berg, Rachmaninoff’s Third Symphony was a conservative new work that would not ruffle the feathers of their conservatives audiences.

Rachmaninoff’s first movement sports a plethora of gorgeous themes, including a charming extended solo for the entire cello section, played with winning, seamless ensemble on Saturday, and mellow themes passed among the clarinet and muted horns at the movement’s opening. Among the fine solos in the “Adagio non troppo,” allow me to salute English Horn player Andrea Overturf, Principal Horn Benjamin Jaber, and Concertmaster Jeff Thayer for their eloquent contributions. Kim and the full orchestra gave the “Allegro” finale the blazing panache it deserved, although the composer took time out for a clever fugal moment and a quiet respite that struck me as a tip of the hat to Richard Strauss’ Der Rosenkavalier.

This concert was presented by the San Diego Symphony on February 28 & 29, 2020, at the Jacobs Music Center in downtown San Diego. The concert on February 29 was attended for this review.