Early US history time: you know John Adams, George Washington’s Vice President and later the second President, as well as Abigail Adams, First Lady and early feminist. But, what do you know about their children? Probably, only John Quincy Adams comes to mind, and outside of knowing that he was the sixth President of the United States, serving between 1825 and 1829, and between the presidencies of James Monroe and Andrew Jackson, you may not know much else about him. I certainly didn’t. 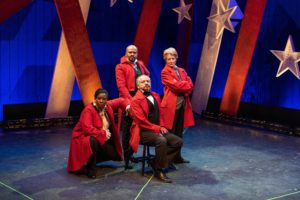 It turns out that Adams was a superb diplomat, serving as an ambassador several times, as well as Secretary of State for President Monroe, but his diplomatic skills didn’t prepare him for presidential leadership. He had great ideas, but he wasn’t a savvy politician, for one thing, and over the course of his career he was a member of the Federalist Party, the Democratic-Republican Party, the Anti-Masonic Party, and the northern branch of the Whig Party, which favored abolition of slavery. Adams evolved, as did the country, during this period.

Adams did succeed in passing several infrastructure projects, but his proposals for a national university, a naval academy, a national observatory, standardization of weights and measures, and a Department of the Interior all went nowhere under his leadership, though all would eventually become established. Adams was also a crucial figure in beginning the Smithsonian Institution, which was as close to a national university that the country was going to get.

After four tumultuous years as president, Adams was defeated soundly by Jackson. He licked his wounds for a bit and then ran for and was elected to the House of Representatives, where he served nine terms and died while still in office.

All of this information is helpful for understanding Aaron Posner’s play, JQA, which begins the San Diego Repertory Theatre’s season. Mr. Posner has created a series of snapshots of Adams’ life, including his interactions with his parents, George Washington, Henry Clay, James Madison, Andrew Jackson, Frederick Douglas, and Abraham Lincoln. The snapshots add up to a look at Adams the man and some of his achievements but in no way does it compose a comprehensive biography. 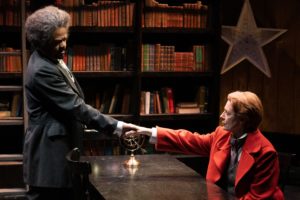 Larry Bates as Frederick Douglas and Rosina Reynolds as JQA

It is dramatic, however, and that’s its strength. And Director Sam Woodhouse has cast four actors to perform multiple roles, including each playing JQA himself. These four fine performers, in alphabetical order, Larry Bates, Crystal Lucas-Perry, Jesse Perez, and Rosina Reynolds, make much of a little history and a lot of talk, some of it quite eloquent. In addition to taking a turn as JQ Adams, Mr. Bates plays Andrew Jackson and Frederick Douglas. Ms. Lucas-Perry plays Louisa Adams, JQ’s wife, and Mr. Lincoln. Mr. Perez plays John Adams père, and Henry Clay, with whom Adams forms a somewhat unholy alliance to be elected President. Ms. Reynolds plays George Washington, Abigail Adams, and James Madison.

Interestingly, the snapshot where Mr. Douglas appears in an attempt to convince Mr. Adams to “come out” as an abolitionist, is eerily similar to a longer conversation between Mr. Douglas and Mr. Lincoln in Richard Hellesen’s play, Necessary Sacrifices, which North Coast Rep filmed as its most recent production. If you saw Necessary Sacrifices, you’ll be at least as fascinated by JQA.

Mr. Woodhouse has done a fine job with shape-shifting his actors and modulating their various roles. Tim Powell’s work as film director finds complimentary ways of putting the work of Mr. Woodhouse and his actors onto film. The creative team – Justin Humphres (Set Design); Anastasia Pautova (Costume Design); Chris Rynne (Lighting Design); and Matt Lescault-Wood (Sound Design) produce work that suits the play and the players – and looks and sounds good on film to boot.

I guess that it’s obligatory to tell the truth at this point: I would have preferred to see this work produced live and with an audience. And the other part of the truth is, I’m happy that companies like the Rep are producing interesting, thoughtful, works as best and as safely as they can for all concerned.