“We tell ourselves stories in order to live,” Joan Didion wrote. For Graciela Daniele, the opposite is also true: living such a full life has created many stories. Michael John LaChiusa (The Wild Party, Hello Again, See What I Wanna See) listened to Ms. Daniele’s stories and found a theme of female empowerment in them. The musical based on those stories is not about Ms. Daniele per se. Rather, it portrays a group of remarkable women pursuing art in the difficult conditions of Juan Perón’s Argentina. The ninety minutes’ long world premiere musical that resulted sketches a small-scale vision of big themes. 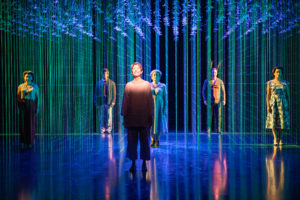 The Cast of The Gardens of Anuncia
Photos by Jim Cox

Older Anuncia (Carmen Roman) looks back on her childhood and coming-of-age. She recalls herself as a girl (Younger Anuncia, played by Kalyn West), learning to dance – and developing a passion for it – while living in a family of three unique and independent women: Grandmama (Mary Testa), Mami (Eden Espinosa), and Tía (Andréa Burns).

In particular, Tía has developed into a published poet, and her poems have a visual quality to them that sets young Anunica’s imagination into full gear. Of course, her imagination doesn’t go to the politics of the day. Rather, it goes to blossoming in the garden of her mind, and to men who either are gentle (Enrique Acevedo plays the gentle males) or whose masculinity can trample on or consume her precious blooms (Talley Sessions plays these men and beasts). The women in her life tolerate these dreams but rein her in as needed (Grandmama is particularly good at bringing Anuncia up short, while Mami provides needed discipline). 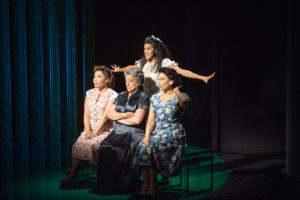 (from left) Andréa Burns as Tía, Mary Testa as Granmama, Kalyn West as Younger Anuncia, and Eden Espinosa as Mamí

All this goes on in an abstract garden filled with vines, provided by scenic designer Mark Wendland and splendidly lit by the veteran team of Jules Fisher and Peggy Eisenhauer. (I was surprised to learn that Mr. Fisher is Ms. Daniele’s husband.) Costumes that fit well but also support singing were designed by Toni-Leslie James, who has collaborated on multiple occasions with Mr. LaChiusa. Ms. Daniele’s direction is not showy, and nor is her very precise choreography, executed in collaboration with Alex Sanchez. There are no big dance numbers here. Rather, everything seems to emerge organically from the stories. It all seems like family coming together to entertain and engage each other. In doing so, it may well entertain and engage the audience, too.

Anuncia’s relationship with her Tía takes center stage more often than not, and Ms. Burns positivity makes her performance shine brighter than others. By contrast, Ms. Espinosa’s music comes off more as dour, though she sings it beautifully, though subdued, way. No one could ever marginalize Ms. Testa, but this show tries. Ms. Roman carries the narrative early on before fading into the background, and Ms. West provides her a youthful counterpart.

Mr. LaChiusa’s music sounds particularly lush for a chamber setting. Credit Drew Levy’s sound design and Deborah Abramson’s music direction of a chamber ensemble that is sometimes seen in the rear of the stage.

It is easy to fall in love with The Gardens of Anuncia. Whether that happens may be at least somewhat dependent on audience members’ abilities to enjoy a story that is inspired by the life of famous dancer Graciela Daniele but in the end is not really about her.

Performs through October 17 on the Donald and Darlene Shiley Stage of San Diego’s Old Globe Theatre, located in Balboa Park’s Conrad Prebys Theatre Center. Performance times are Sundays, Tuesdays, and Wednesdays at 7pm, Thursdays, Fridays, and Saturdays at 8pm, and Saturdays and Sundays at 2pm. Free parking is available throughout Balboa Park; inquire at the box office about valet parking/shuttle service if needed. The run time is approximately 90 minutes with no intermission.