Just when I was thinking that the music of Aaron Copland is old hat and that hearing, say, another rendition of his “Appalachian Spring” would be as enticing as listening to a bored teenager plunk out “Chopsticks,” along comes his rarely heard 1926 Piano Concerto to blow me away. Especially when the piano soloist is Inon Barnatan, whose revelatory performance electrified the San Diego Symphony audience Friday (January 6) in Copley Symphony Hall. 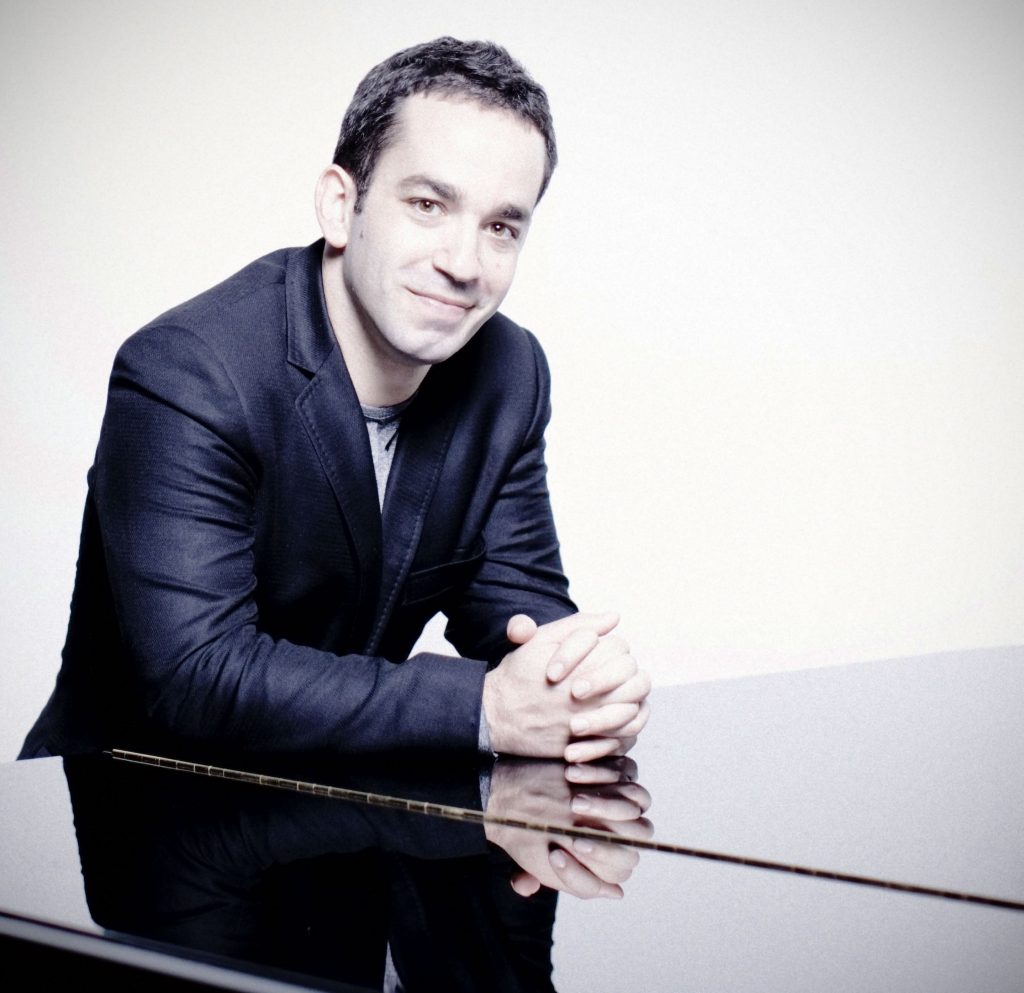 Barnatan’s panache came as no surprise. A few years back he figured prominently in several excellent programs presented by the La Jolla Music Society, and I particularly recall his brilliance in a duo recital with the cellist Alisa Weilerstein in January of 2014. In this two-movement Piano Concerto, Barnatan reveled in young Copland’s flippant revision of the larger-than-life, keyboard-smashing piano concertos of the Russian Romantics, introducing the piano solo with gossamer, Satie-like phrases and then tossing in jazz-inspired rambles that evoked popular ragtime tunes and sensuous stride-piano riffs.

No doubt these jazz allusions irked the Boston critics—they hated every note of the work—at the Piano Concerto’s premiere under Serge Koussevitzy, bringing into Boston’s sacred concert hall the popular idioms from smoke-filled clubs that the Brahmin symphony subscribers would never patronize. Barnatan’s acute rhythmic delineations, his clean, sharp attacks, and his propulsive but  never rushed tempos did justice to Copland’s delightfully unpredictable invention and completely mesmerized this member of the audience.

In guest conductor Andrew Gourlay, Barnatan had an ideal ally. Making his American debut with the Symphony’s all-American program, the young Brit sagely coaxed excited anticipation from the orchestra even in Copland’s more spare passages. Gourlay emphasized the brass and woodwind solos, keeping the strings at low-profile, an important aspect of young Copland’s anti-Romantic attitudes of the 1920s.

Gourlay had already proven his affinity to Copland’s style in his smart, crisp direction of the program-opening Suite from Billy the Kid, arguably the least frequently programmed of Copland’s popular ballet compositions. Like Béla Bartók’s Concerto for Orchestra, Copland’s masterful orchestration of his ballet gives nearly every first chair player a chance to shine. The San Diego Symphony principals all rose to the occasion with amazing results, especially Principal Trumpet Micah Wilkinson and the fleet mallet-wielding members of the percussion section: I could not imagine a more vibrant, committed performance of this ballet.

Following the Copland immersion of the concert’s first half, Barnatan returned to play yet another piano concerto, Andrew Norman’s “Suspend,” a concerto written for Emmanuel Ax and premiered by the Los Angeles Philharmonic in 2014. Norman outdid Copland’s understatement for the solo piano entrance: for several pages of the score, Barnatan fingered notes above the keys, emitting not a single sound. Then, slowly and mysteriously, single tones slipped in from remote parts of the orchestra and eventually from the keyboard.

Tremulous piano iterations eventually grew into explosive arpeggiations, against which the orchestra created an eerie halo of static chords. Norman, an articulate 36-year-old who was recently named Musical America’s 2017 Composer of the Year, introduced his work from the Copley Symphony Hall stage, inviting the audience to imagine a stellar pianist such as Inon Barnatan entering a vast empty hall, sitting down at a piano to improvise and imagining an orchestra into existence to accompany him.

Although this in not an inherently dramatic scenario, Norman’s “Suspend” clearly engaged the audience on an emotional journey that proved compelling and even transcendent. Barnatan’s miraculous nuance and pellucid articulation played a major role in this achievement, as did Gourlay’s sensitive direction.

Typically, I see the inclusion of George Gershwin’s evergreen “An American in Paris” on a symphony program as an act just short of pandering, but I confess that it completed this concert in an uncannily satisfying manner, especially considering the orchestra’s ebullient account of the work. Perhaps this can be ascribed to Gershwin’s fecund melodic genius so deeply rooted in the American vernacular tradition. As the final benediction to the program that inaugurated this month’s “Our American Music” festival by the San Diego Symphony “An American in Paris” proved the perfect choice.

[themify_box style=”shadow” ]This concert by the San Diego Symphony was performed on Friday, January 6, 2017, in the Jacobs Music Center’s Copley Symphony Hall, 750 B Street, San Diego, CA 92101. The program will be repeated on Sunday, January 8, at 2:00 p.m. in the same venue.[/themify_box]