Steven Schick ramped up the excitement of his It’s About Time Festival with an all-star percussion marathon at the Jacobs Music Center Tuesday, January 16. On the Copley Symphony Hall stage, where row upon row of prim string players usually sit, Schick and his crew had placed a formidable array of malleted instruments, drums of every description, gongs, cymbals, and obscure (but charming!) percussion instruments this critic has never encountered. 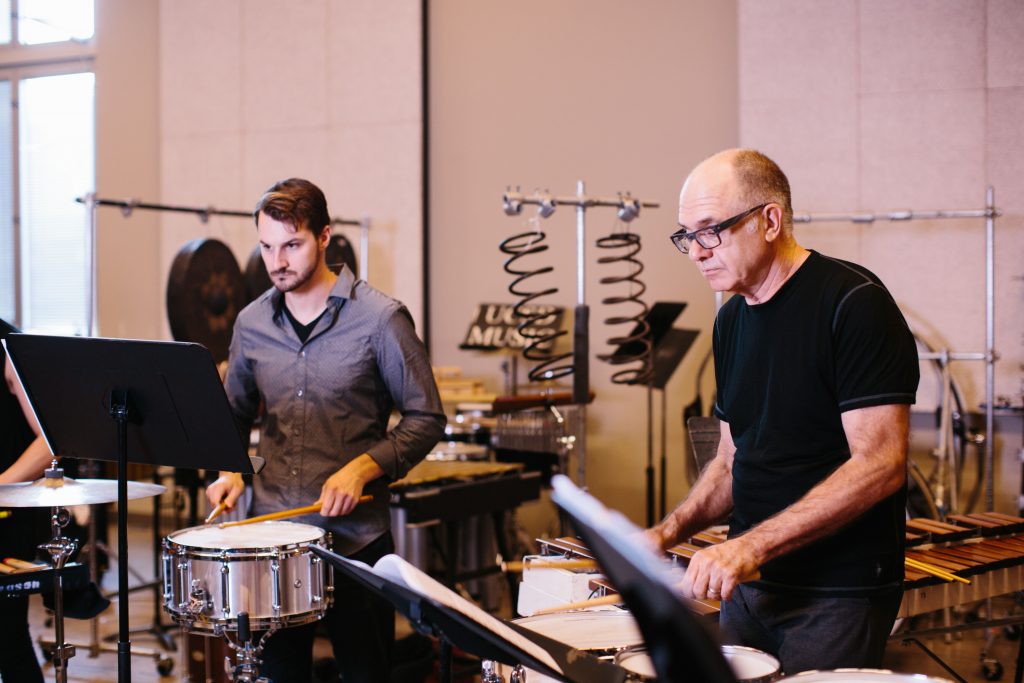 Appropriately, he opened his program with Edgard Varèse’s “Ionisation,” the 1931 piece that birthed the genre of solo percussion music in western classical music. In this tradition, before “Ionisation,” the sole function of percussion players was to garnish an orchestra of winds and strings. Varèse made percussion the whole entrée instead of merely the garnish.

Schick and his 13 players gave a strong but deftly nuanced account of “Ionisation,” allowing the raucous portions to wail freely, but maintaining a decorous clarity in the less densely scored sections. And considering the inclusion of two contrasting hand-cranked sirens in the instrumentation, Schick sagely avoided the temptation to camp up the role of these unorthodox participants. Combining four members of the San Diego Symphony percussion section with players from Schick’s acclaimed UC San Diego based red fish blue fish ensemble provided this commander with a particularly adept battalion.

I was highly impressed with the 1942 Toccata by Mexican composer Carlos Chávez, a three-movement showpiece for six percussion players as meticulously structured as a Mozart Serenade. The slow center movement displayed how gently rubbed cymbals and drumheads can weave a sustained, diaphanous texture, which Chávez sprinkled with discrete, delicate tones from the pitched percussion family. On the program’s second half, contemporary composer Anna Thorvaldsdóttir exploited this quiet, dreamy sonority to even greater heights in her “Aura” from 2011.

In his introductory remarks from the stage, Schick noted that while Chávez eschewed any typical Latin American rhythms in his Toccata, the U.S. composer John Cage freely infused such lively Latin rhythms in his 1941 “Third Construction,” a single-movement essay for four percussion players, which he and Symphony percussionists Gregory Cohen, Andrew Watkins, and Erin Douglas Dowrey performed with such verve.

Schick closed the program’s first half performing the amazing “Psappha,” a virtuoso solo showpiece by the late composer-architect Iannis Xenakis that pitted both random and metronomic drum patterns against the taut pings of wood blocks and metal bars.

He opened the second half with one of the most unusual percussion solos extant, Vinko Globokar’s 1985 “?Corporel,” which uses the performer’s body as the sole percussion instrument.

Seated shirtless and cross-legged center stage, Schick created a unique sonic collage of pats and slaps to his own torso, complemented by finger snaps, hand claps, and strange vocalizations. Although most percussionists are fluent playing a wide range of instruments, they also remain the only instrumentalist that can successfully exercise their art without aid of an instrument.

Steve Reich’s “Music for Mallet Instruments, Voices and Organ” from 1973 climaxed the program with its unrelenting minimalist curtain wall of dense mallet sounds generated from multiple marimbas, glockenspiels and vibraphone held together with static organ chords and a garland of textless (?) vocalizations. The three voices of kallisti—Susan Narucki, Kirsten West, and Hilary Jean Young—were consistently overpowered by the instruments, but from time to time it was possible to detect their silvery timbre floating above the sonic melee.

In addition to the percussionists mentioned in the review, these members of red fish blue fish also performed and made the evening memorable:

This concert was presented on January 16, 2018, by the San Diego Symphony’s It’s About Time Festival at the Jacobs Music Center in downtown San Diego. The Festival continues through January 28, 2018.