Christmas has arrived with a healthy dose of classic cheer (and a roasted turkey twice the size of Tiny Tim!) as the annual remount of A Christmas Carol returns to the Cygnet stage through Christmas Eve.

Written by multi-hyphenate Sean Murray (who also directs and stars in this production) and with a score by Billy Thompson, this Cygnet adaptation has been a mainstay of the Old Town Theatre stage for 11 years. Based on the 1843 beloved holiday classic, A Christmas Carol tells the tale of miserly businessman Ebenezer Scrooge, a series of haunts by ghostly apparitions, and his subsequent redemption on Christmas Day. And, while this version remains faithful to the original novella and Victorian styling, there is an ingenuity of its execution that cannot be overstated. 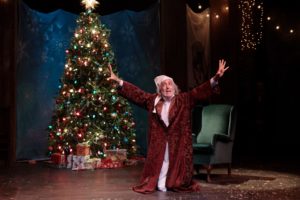 Take, for example, Murray’s handling of Scrooge. While the role is often played to caricature, I was delighted to find Murray’s Ebenezer ever-so-slightly more relatable. Of course, he is still that “tightfisted hand at the grindstone,” yet even as Scrooge breaks the fourth wall to malign the audience, there is a seeming vulnerability in his edges… loneliness or insecurity perhaps? In Murray’s hands, this nuance is explored bit by bit; we experience the challenges and heartbreak of Scrooge’s past, the reveal of his hidden yet tender heart in the present, and his fear of the futures foretold. A textured light plot rich with gobo projections and unique angles (Colby Freel) capitalizes on these pivotal moments. I found myself rooting for the character’s redemption far earlier than I expected. 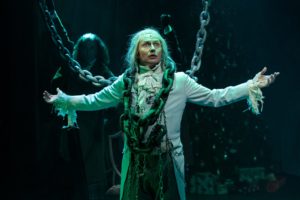 Yet beyond those individual performances and most strikingly, where many shows rely solely on sound effect cues run from the booth, the on-stage accompanist is, instead, partnered with an array of tunes and joyful foley effects created by the actors.

Periodic Christmas carol and hymn-inspired original songs are interspersed and performed in a way that speaks to both their vocal skills and Patrick Marion’s detail oriented music direction (those consonants!). There are doors slamming, bells ringing, horse hooves clopping, and the crunching sounds of ice and snow underfoot. Actors employ their voices to create phantom overtones for the Ghost of Christmas Past, tap their forks against plates in choreographed tandem at the Cratchit table, and pelt the audience gleefully with snowballs. Puppets abound as Tiny Tim and a host of other youth characters (and ghosts)… in fact, even Marley’s chains, the trees in the churchyard, and a bonnet “dog” are pushed into puppetry service. These unique embellishments add to the freshness of a story that is increasingly overdone. 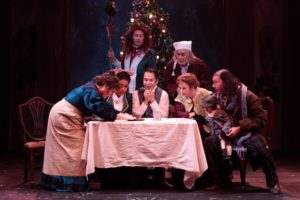 The cast of A Christmas Carol. Photo by Karli Cadel Photography.

Yes, this production includes the expected classic Victorian trappings and Christmas redemption. However, it has more than that. It has full allegiance to the story and an equal commitment to telling it with a creative bent. It has performance precision, energy and effervescence, puppets, and projections, music and magic.

Simply put, Cygnet’s A Christmas Carol has been crafted in a way that guarantees novelty alongside nostalgia… so long it’s enjoyed before closing Dec. 24.