Love Shakespeare’s Hamlet? Hate it? Never seen or read it? If you enjoy live theater, go see “I Hate Hamlet” in any case. Prepare to laugh and maybe reflect a little on life.  “I Hate Hamlet” presents a strong cast and clever script that will make you laugh and enwraps it all in a serious theme of the transformative power of art.  There are guffaws with lines that catch you by surprise, we laugh with and at the characters as the comedic timing of the entire cast is on point, not a wasted line. Serious actors in a comedic play that takes itself and its characters just seriously enough. 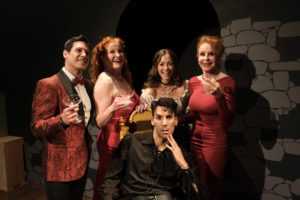 It’s Hollywood versus New York theatre in a play written by Paul Rudnick who, ironically, has written for the movies. Debuted on Broadway in 1991, I Hate Hamlet” is directed by Phil Johnson, artistic director and founder of The Roustababouts Theater Company. Scripps Ranch Theatre is on the campus of Alliant University and one of the smaller venues in San Diego. Set design by Alyssa Kane makes efficient use of the small space. While at first, for such a small venue, the actors come off as overacting, to project to a larger audience, that too is part of the spirit of the play, of Acting!

A TV doctor’s series gets cancelled so he decides to move to New York to explore a career in The Theatre. Alex Guzman plays Andrew Rally as one of the more stable and less flamboyant characters in the play. We first meet Rally and his New Jersey-drawling Real Estate agent Felicia Dante (played by Christine Hewitt) as they visit the apartment formerly occupied by the famous actor John Barrymore and where all of the action in the play takes place.

Barrymore himself (played by John DeCarlo) enters as a ghost with the dramatic flair of a silent screen star. Defending his own reputation, he urges Rally to perform as Hamlet. In the Broadway debut, Barrymore was played by Nicol Williamson of whom playwright John Osborne said was “second only to Marlon Brando” for “extraordinary stage performances”.  Mr. DeCarlo channels the frenetic energy of Williamson’s Hamlet.  Seeing the TV actor’s weak bow, Barrymore’s finest scene comes at the end of the play when he schools Rally on how a real actor accepts the adulation of the audience and bows his way out.

Rally’s girlfriend (played by Lynnia Shanley) comes out of the gate like a blustery, flighty wind, defending her chastity and adoring Rally with equal flamboyance. She sets up the initial opportunity for character transformation by making Rally’s Hamlet performance the test for whether he’s “the right guy” as she looks for a Hero to marry.  As the play progresses, though, the flamboyance gets tempered and she contributes to the overall message of the play with a surprising recognition of Rally’s performance. 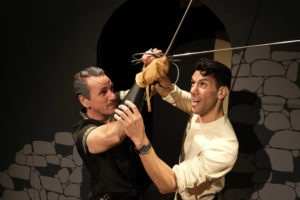 Portraying the consumate Hollywood agent caricature, Rally’s Hollywood representative (played by Adam Daniel) is fawning and pushy at the same time, with laugh-extracting comedic timing and a continuous energy on stage that is infectious. We sympathize with his pleas for Rally to take a new TV contract worth millions rather than play Hamlet in Shakespeare in the park “for free!!”

Connecting past with present, Rally’s drama agent (played by Jill Drexler) recounts her encounter with the living Barrymore of his prime with a wry energy that belies the age of someone who had a dalliance with Barrymore and is still alive in 1989, the year of the play.

Remarking on the court jester Yorick in one of Hamlet’s most quoted lines Hamlet says “Alas, Poor Yorick, I knew him.” This play – and Yorick by Hamlet’s report – come with “infinite jest, of most excellent fancy.” The true measure of art is whether it changes you, makes you feel. “I Hate Hamlet” takes the power of the tragedy of Shakespeare’s Hamlet, gins it into comedy and winds up showing how it affects even the actors who play the roles.