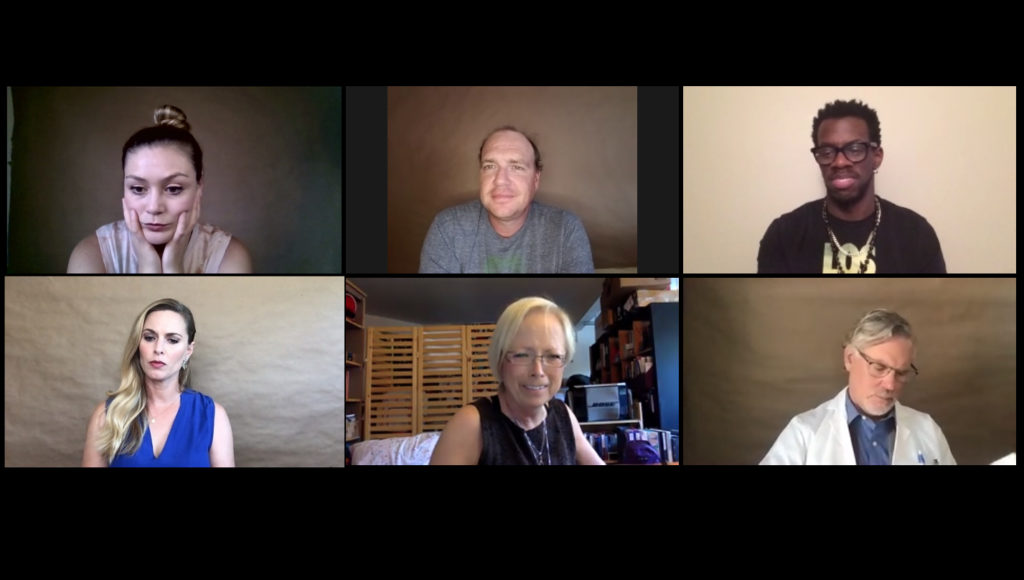 Before North Coast Repertory Theatre’s Zoom video production of Human Error begins, Artistic Director David Ellenstein states in his introduction that the West Coast Premiere is a “timely” one. As audiences spend time with the main characters, it becomes clear why Ellenstein used that word.

Madelyn and Keenan are soon introduced to the conservative Heather and her Ohio State football and gun-loving husband, Jim (Max Macke). Heather agrees to carry Madelyn’s baby to term, and the couples end up forming unexpected connections.

Eric Pfeffinger’s script starts off as a breezy comedy, with broad comical punchlines and situations. Yet, the more the couples interact with each other, Pfeffinger’s writing goes into deeper territory.

The playwright’s tale is about forming meaningful relationships, even with people who share contrasting personal beliefs. Pfeffinger writes the couples with nuance and depth.

All of the main performers go beyond playing their roles as caricatures.

Playing the person with the most amount of growth, Pearce convincingly depicts the closed-minded views of Madelyn, and her eventual bond with Heather.

Wilke’s performance veers from cheerful to vulnerable, which helps create investment in Heather. Her charming and sunny demeanor is very appealing.

Sledge and Macke generally play their parts as comedic roles, although the former’s acting is thoughtful in a conversation about sitcom writing, and Macke is moving when Jim talks about being a parent.

Something positive that the husbands have in common is that they deeply respect their wives, which is not lost in Sledge and Macke’s acting.

Dodge does clueless humor well as the bumbling Dr. Hoskins, and earns big laughs in every sequence that he appears.

Even though the writing and the acting is strong, your mileage may vary for how long it takes to get comfortable with the Zoom presentation, which is of no fault of director, Jane Page.

Not too many people are used to seeing a full-length play in this format of video. After a few minutes, I was able to lose myself in the tale around the point when the two couples start to interact with each other in Heather and Jim’s house in Sylvania. I was so invested in the performances and Pfeffinger’s writing that I got used to the untraditionally recorded presentation.

Page stages both the humor and occasional dramatic moments with a natural style of storytelling, and Aaron Rumley’s editing keeps the sequences flowing in a smooth way.

While theatregoers miss seeing shows at North Coast Rep’s Solana Beach venue, Page’s great interpretation helps fill the void of live theatre. In a year with so much divisiveness, a funny plot about the importance of empathy is not just relevant, but surprisingly cathartic.

Human Error is available for viewing on northcoastrep.org through June 29.