Soprano Latonia Moore’s ample voice has rocked the world’s largest opera houses from England’s Covent Garden to New York’s Metropolitan Opera and even San Diego’s Civic Theatre. But as a young college student aspiring to become a hot jazz singer, the idea of singing opera was a giant turn-off.

When her newly assigned vocal instructor at the University of North Texas suggested she expand her range into operatic repertory, she flatly refused. 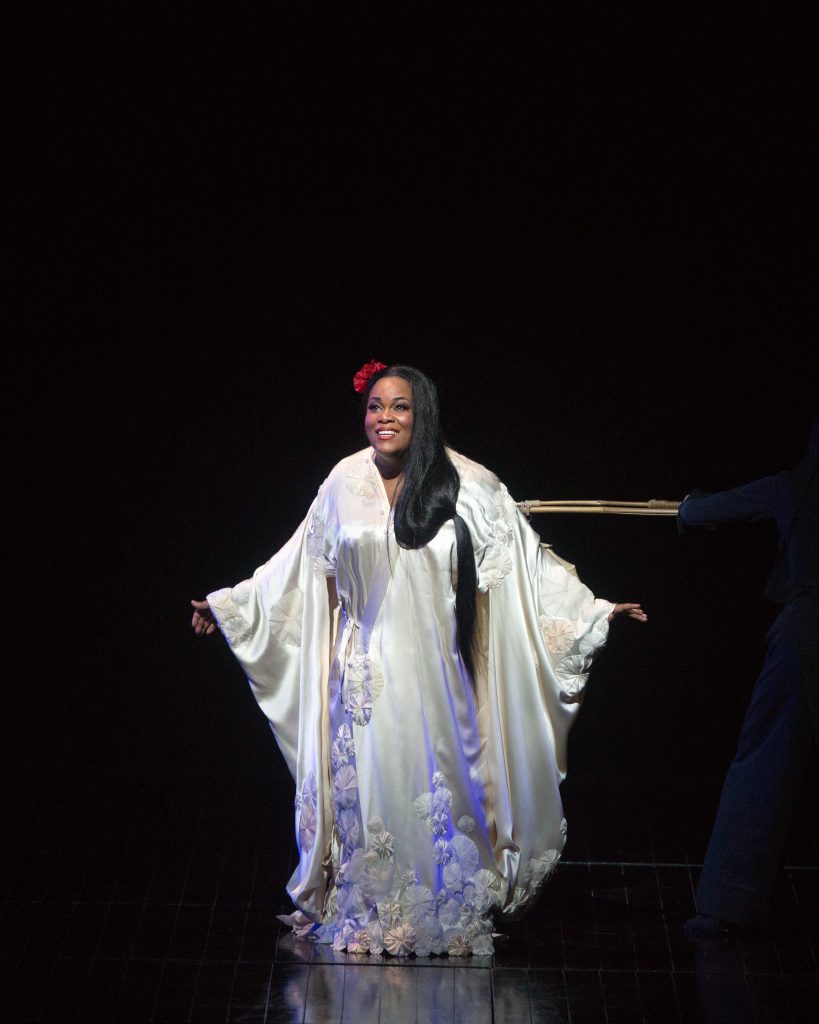 “You mean you want me to sing all that screaming stuff?” she sneered.

This same instructor had already converted another jazz-hungry soprano, Patricia Racette, into an opera diva, so the young singer’s initial resistance proved to be not much of a challenge. After some modest persuasion, Moore agreed to sing in the school’s opera chorus—after all, she had been singing in church ensembles and choirs since she was 7—and her conversion happened in the music department’s first production.

“We were doing Pagliacci, and watching it from my place in the chorus I fell head over heels in love with opera. I immediately wanted to be Nedda,” the opera’s ill-fated heroine. That would have been unlikely at the time, because Moore was still a mezzo, but as she studied and slowly discovered her true soprano range, she came into that trove of leading, ill-fated soprano roles: Mimi in La bohème, Liu in Turandot, Tosca, Aida—her San Diego debut role in 2013—and Cio-Cio-San in Madama Butterfly, a role local audiences will experience at Civic Theatre from April 16 to 24, 2016.

Her career received a jump-start when she won the Metropolitan Opera National Council Auditions in 2000. “I chose the New York regional auditions and the competition was really strong that year. But I knew that I had the goods to win—not that I was the perfect singer—but I was confident.”

Writing in the New York Times about Moore’s performance in the Met Auditions’ final concert, music critic Anthony Tommasini praised her “radiant, warm sound and lovely phrasing.” He went on to say “Moore’s technique is not yet solid, but what she doesn’t know she can easily learn. What she has already is special: a distinctive, poignant sound that makes audiences sit up.”

Among the finalists in the 2000 Met competition was the tenor Bryan Hymel, with whom she later—in 2007—sang her first Madama Butterfly, at Palm Beach Opera. Her first Butterfly proved daunting, however.

“My grandfather in Houston, the preacher in whose church I first sang publicly, died the night before the production’s opening. I was scared because of the length of the role—the amount of time I was on stage singing—and the focus it required.”

But the role immediately grew on Moore, and it has become her favorite. “It fits me like a glove,” she said, “and it takes advantage of the brightness of the top of my range.

“What I like most is the character transition I get to portray. I love the ecstatic feeling of her wedding day in Act One—it is the sweetest day of her life. The second act shows her three years later in a sense of abandonment as she waits for Pinkerton’s return, and finally she takes her life when he returns with his American wife.”

Moore expressed an unusual take on Cio-Cio-San’s suicide, which in Puccini’s orchestral writing is expressed in dark colors and brings the opera to its abrupt and startling climax.

“I see her death as joyful, in a way. She knows that her little son will be taken care of and that her endless waiting is finally over with.”

At 35, Moore is still a young singer, but she has her sights on horizons beyond the popular Puccini heroines. She has been contracted to sing Lady Macbeth in Verdi’s Macbeth, although since the company has not yet announced that season, she cannot say where she will sing it.

“But what I really am eager to sing is Wagner,” she admitted. “I see myself as a great Sieglinde in Die Walküre.”

In addition to soprano Latonia Moore in the title role, San Diego Opera’s production of Puccini’s Madama Butterfly includes Romanian tenor Teodor Ilinăi as Pinkerton, and mezzo-soprano J’nai Bridges as Suzuki. Yves Abel will conduct the orchestra, and the production from Opéra de Montréal is new to San Diego Opera. Performance dates at the San Diego Civic Theatre are April 16, 19, 22 and 24.