In the four years I have been covering the Hausmann Quartet’s Haydn Voyages series at the Maritime Museum of San Diego, I have been impressed with breadth and caliber of the contemporary and 20th-century repertory they have garlanded around their Haydn offerings. This is notable because tastes of most string quartet aficionados are quite conservative—even programming Debussy and Ravel can elicit complaints from these audience members. 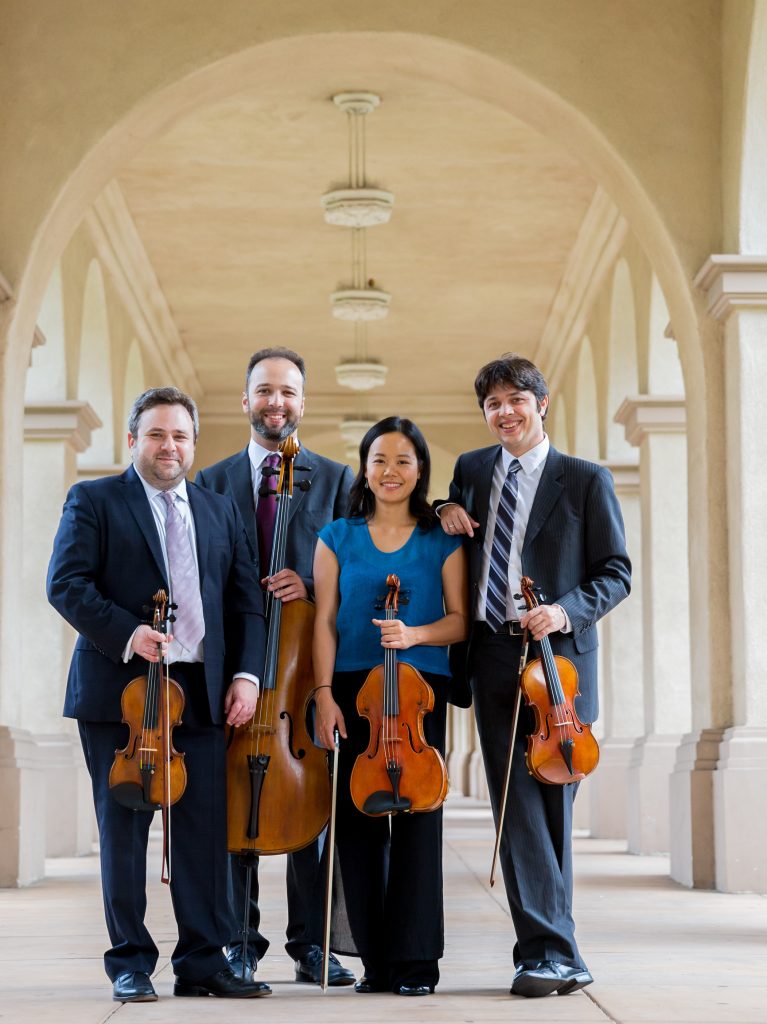 Although our European colleagues have grown to appreciate the oeuvre of the Polish-Lithuanian Bacewicz, her works rarely appear on programs in North America. Just last week, for example, I viewed a concert streamed by the London Symphony Orchestra under Duncan Wood that adroitly paired Bacewicz’s rousing “Music for Strings, Trumpet and Percussion” with the grandiloquent Richard Strauss Oboe Concerto. Bacewicz’s biographer Judith Rosen describes the composer’s style as “bridging the gap between the neo-romanticism of Karol Szymanowski and the modernism of Witold Lutosłavski.”

The astutely constructed opening movement of String Quartet No. 4 alternates between slow-moving, glowing textures and animated forays bursting with brightly syncopated motifs, and connects each contrasting section with a crafty solo. Alex Greenbaum turned out a particularly wistful cello solo, and violist Angela Choong’s golden sonority floated a persuasive theme over busy, motoric accompaniment by her colleagues. First violinist Isaac Allen provided a playful air to his folksong-like serenade. Because Bacewicz started her career as a concert violinist, it is no surprise that her string writing is unfailingly idiomatic, from bravura solo to the humblest accompaniment figure.

Mysterious, hovering themes suffuse the quiet middle movement, sustained by close harmonies seasoned with cautious dissonances that would not invite reproach from the Stalinist musical censors who in 1951 could all too easily stifle or end careers. Rollicking tonal motifs cavort through the closing Allegro giocoso movement, allowing second violinist Bram Goldstein to spin out rippling solos with apt abandon. Hausmann gave the final movement the verve it deserved, bringing this splendid string quartet to its vibrant finale.

Although Puerto Rican composer Angélica Negrón’s single movement “Marejada” (“the ocean’s surge”) lacks the scope of the traditional multi-movement string quartet, the composer makes up for this in bold invention. The under 10-minute piece rides on the continuous pedal point of a low-pitched sound track that suggests the ocean’s faint roar. Negrón favors pizzicato arpeggios and precise strumming over bowing, although she includes several flashy, bowed flourishes in the middle of the piece. To close “Marejada,” the composer has each player put down their instrument and pick up a found object to use as a percussion instrument: apparently random clicks and bongs quietly settle into a concluding descrescendo.

This piece was performed twice, once with each player at home but playing ensemble via Zoom—Hausmann titled this concert Alone Together—and a second time standing together in the front of the otherwise empty concert room in which the rest of the concert was filmed. Playing in the same room gave a more favorable impression of “Marejada,” in part because the string overtones blended and added a pleasing resonance that you cannot get Zooming. Even the pizzicato sounds had more definition and character when played and recorded in the hall.

Haydn’s D Major Quartet, Op. 20, No. 4, proved both remarkable and unremarkable. The latter because it followed the most typical quartet structure: a complex opening movement in sonata allegro form; a slow second movement written mainly in contrasting minor mode; the brisk third movement in dance-like 3/4 time, and a rapid concluding movement. What proved remarkable was the composer’s ability to extract such affable diversions from the simplest of ideas, which Hausmann played with elegant, polished fidelity to the composer’s intentions.

This concert of the Hausmann Quartet was performed and recorded at the Maritime Museum of San Diego’s Berkeley and streamed Sunday, 28 February 2021.