The Hausmann Quartet launched their 2022 Haydn Voyages concert series Sunday afternoon at the Maritime Museum of San Diego’s permanently moored Berkeley ferry on San Diego Bay. Following a program template that the Haydn Voyages series has developed to build a loyal audience, Hausmann balanced a pair of Haydn string quartets with a pair of lesser-known quartets from the 20th and 21st-centuries. 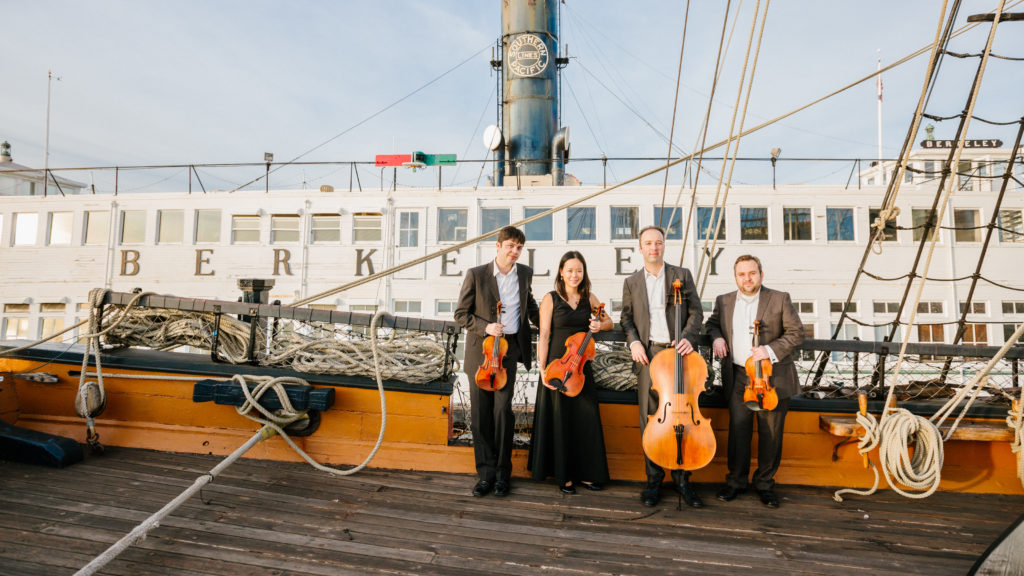 Something old; something new—Hausmann borrowed a tiny portion of our time, but no one left the concert blue.

Astute music history students usually recognize Germaine Tailleferre as the sole female composer of “Les Six,” a self-branded cadre of half a dozen avant-garde Parisian composers in the 1920s, although few have heard her music or could even come up with a title of one of her important works. Hausmann played her Quartet from 1919, a modestly scaled three-movement quartet full of spirited themes and dense counterpoint, but none of the obvious wrong-note harmonies that marked Igor Stravinsky’s neoclassical works from this post-war period, especially his L’histoire du soldat.

I was most impressed by Tailleferre’s expansive final movement, based on a dashing, agile tune that could be mistaken for a wild gypsy dance that she deftly contrasts with a tangle of delicate themes in the high range of the violins. The texture of her agitated middle movement—we usually expect the center of a three-movement work to be quiet and reflective—brought to mind the unrelenting pulsing moments of Debussy’s String Quartet. If Tailleferre’s work does not belong to the same high echelon as Debussy’s landmark Quartet, it surely does not deserve its current obscurity.

A New Zealand composer of Ghanaian descent, Leila Adu-Gilmore wrote her 2012 quartet “If the Stars Align” for the St. Lawrence Quartet. A probing, post-modern work, this striking four-movement string quartet employs microtones and polyrhythms, and as Hausmann’s resident musicologist Derek Katz helpfully explained before the ensemble performed the work, the composer’s use of harmonics, extended techniques, and the occasional suppression of vibrato makes her exploitation of timbre as important as thematic development is for traditional string quartets.

Adu-Gilmore makes the viola the protagonist of this quartet, which meant we were able to hear much more of Hausmann violist Angel Choong’s wonderfully dark, resonant sonority as she initiated most of the composer’s main themes and played her cadenza—bold, multiple-stop gestures that build with edgy intensity—between the third and final movement of the quartet. For all of the composer’s use of unusual techniques, she also writes winning melodies. I particularly appreciated the playful interchange—almost a duel—she constructed in the third movement for first violinist Isaac Allen and violist Choong that unfolded over cellist Alex Greenbaum’s vibrant pizzicato motifs. Violinist Bram Goldstein is the fourth member of the Hausmann Quartet. Unlike most string quartets, “If the Stars Align” ends with a subdued final movement whose final cadence simply fades into silence.

Hausmann chose a transparent string quartet from Haydn’s mid-career, the D Major Quartet, Op. 33, No. 6, to contrast with one of his last and most accomplished quartets, the G Major, Op. 77, No. 1. With the exception of the D Major Quartet’s pensive second movement in a minor mode, this is a sunny work that stays on the surface of the music and probably brings greater reward to the performers than to their listeners.

The G Major Quartet, however, bristles with suave themes that the composer develops with consummate skill and the Hausmann Quartet brought out with their customary ardor and ensemble finesse. I particularly enjoyed the third movement, an ebullient “Menuet” marked Presto whose jaunty first violin theme animates the entire movement until it breaks into a surprisingly aggressive Trio that takes off at an even faster pace.