As is essential these days, New York City’s Harlem Quartet is attempting to attract new listeners by combining unorthodox programming, community outreach and youthful exuberance. The group, which has been around for ten years, boasts some very fine string playing, an interesting and developing repertoire, and the obvious energy required to make a successful career in chamber music. 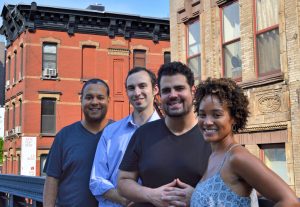 Beethoven’s Quartet in C Minor, Op. 18, No. 4, opened the program last Saturday at the Conrad Prebys Concert Hall at UC San Diego. Although the work is generally considered a youthful piece from Beethoven’s Early Period, it displays many of the traits that characterize his later and more mature music. Aspects such as a second development section in the first movement, the absence of a slow movement, and an absolutely solid developmental motivic technique belie a master’s touch, albeit with a young master’s hand.

The first movement, marked Allegro ma non tanto, was a mess. The opening tempo set by first violinist Ilmar Gavilán was much closer to a Vivace or Presto–there was no “ma non tanto” about it. The tempo brought out a bizarre tendency to play the notes with a rhythmic sense that was somehow not physically grounded to the pulse. It was as if each of the players were playing all of the right notes, more or less in time and in tune, but without anchoring them to an “ictus,”  which resulted in a near vertiginous sense. Since every movement of the entire work was quick, every movement essentially, failed.

The second problem with this group was its sound. Quartets need to create a group sound that blooms or blossoms. With the Harlem Quartet, the sound, excepting the cellist’s, was flat and dead. It would be helpful to know more about the quality of the instruments they play. Perhaps a generous philanthropist can be found to outfit these fine musicians with a first class, matched set of string instruments.

This rhythmic dysfunction concerned me a priori in the two pieces that followed. The quartet launched into Dave Glenn’s arrangement of Dizzy Gillespie’s iconic “Night in Tunisia,” a hoary bebop standard from the early 1940s. Cellist Felix Umansky opened the tune with the usual bass line played pizzicato. Again, the tempo was way too fast, there was zero groove, and I thought that the work was going to be a tired rendition by four classical players indulging in “wanna-be” jazz playing, but my suspicions were wrong.

Each of the musicians, to a greater or lesser degree, displayed a technical and practical awareness of the bebop idiom. Each brought their own influences, and my guess would be that Gavilán has listened to and played a lot of Cuban charanga music; violist Jaime Amador sounds like he might be a closet rock guitarist or bass player; Umansky obviously has some deep jazz roots, and second violinist Melissa White displayed a style that was riff and groove oriented.  The crowd loved the performance, although I was unimpressed with it. The arrangement sounded too polite and democratic in giving everyone a solo (not necessary), and when it came time to wrap things up, the form of the tune was not respected.

The next non-classical piece, however, was positively incendiary. The Puerto Rican standard “El Cumbanchero” by Rafael Hernández Marin as arranged by Gavilán’s famous father Guido Gavilán was roasting. Groove, musical ideas, ensemble–everything was excellent. For once, everyone sounded at home and comfortable.

The entire second half of the program consisted of Felix Mendelssohn’s String Quartet in E Minor, Op. 44, No. 2, from 1837. Written near the beginning of Mendelssohn’s blissful marriage, the work exudes youthful charm exuberance. Although the same rhythmic problems showed up as in the Beethoven, due to the essentially lyrical nature of the work, those problems were not as apparent. In fact, this was the Harlem Quartet’s strongest performance of the entire program.